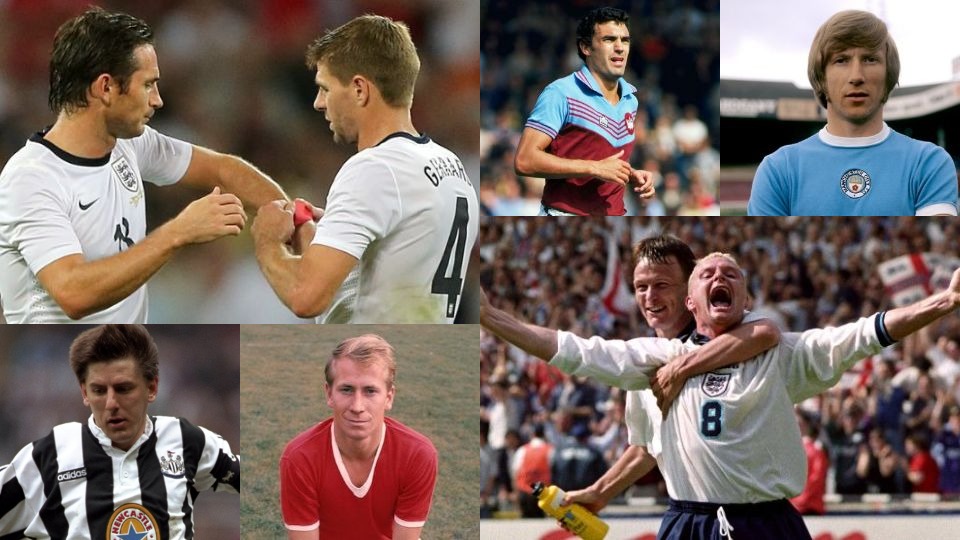 Midfielders are the heart and soul of a team. They chain between defense and attack, they can open up opposition defense with one pass or make a game-changing tackle to deny a scoring chance for their opponents. England has always been blessed with great midfielders, let us have a look at some of the greatest English midfielders of all time.

Based on consistency, impact, longevity, here are the 15 greatest English midfielders of all time.

Many good things emerged from West Ham’s golden age in the 1960’s, and Trevor Brooking was certainly one of them. Having graduated through Greenwood’s regime, Brooking was ready to continue the legacy of beautiful football when the stars of the previous era began to leave and retire. Brooking stepped up to become West Ham’s most important player.

His majestic nature was so evident on a playing surface far rougher and muddier than the smooth ground we see today, that it is definitely worth arguing. He was rarely booked or sent off during his West Ham career and due to his gentlemanly approach to the game where he rarely contested a referee’s decision.

Brooking won the 1975 FA Cup and the 1980 FA Cup in which he scored the only goal. He was also the club’s player of the season on four occasions and caretaker manager on two occasions in 2003. Brooking played 47 times for England, scoring five times.

Outstanding attack-minded footballer Beardsley played at two separate World Cup finals while achieving over 50 caps for his country. Beardsley has a World Cup goal to his name after finding the back of the net in England’s 3-0 win over Paraguay in 1986.

At club level, he played for Newcastle United, Liverpool, and Everton, having also had spells with Carlisle United, Manchester United, Vancouver Whitecaps, Bolton Wanderers, Manchester City, Fulham, Hartlepool United and the Melbourne Knights. He is most notably remembered for his time with Newcastle United, where he made more than 300 apps over two spells.

Glen Hoddle was a supremely gifted midfielder during his heyday. He featured in two World Cup finals, making a single appearance at the 1982 competition. He played a more prominent role four years later, helping his nation reach the quarter-finals following some fine performances. Glenn Hoddle was, without doubt, one of the most naturally gifted English players of his generation.

Hoddle lit up the White Hart Lane for 12 years with sublime skills, unequalled passing ability, his eye for a goal and that knack of being able to turn a game with a moment of magic. He played more than 500 games for Spurs and is regarded as one of their greatest ever players.

One of the greatest English midfielders of all time, Beckham’s sweet right foot and ability from set-pieces was a key cog in Sir Alex Ferguson’s system for nearly a decade. His nine full seasons at Man United earned six Premier League titles.

Beckham played at three World Cup finals and missed out on a fourth after picking up an Achilles injury prior to the 2010 competition. The midfielder had an eventful World Cup history after he was dismissed against Argentina in 1998 having scored versus Colombia in the group stage. He then struck a crucial penalty against the Argentines in 2002 before sending the Three Lions to the quarter-finals in 2006 by netting against Ecuador.

He notched up 265 apps for Manchester United, before he hopped around European giants, such as Real Madrid, AC Milan, PSG and also the MLS outfit LA Galaxy.

Peters was a fine midfielder during his prime, with his speed and creativity helping to propel England to glory in 1966. Indeed, Peters scored in the 4-2 win over West Germany in the final at Wembley. He was again called upon four years later, and again he netted versus the Germans. But this time England lost in extra-time.

A free-kick specialist, Peters was described by England manager Sir Alf Ramsey, after a game against Scotland in 1968, as being “ten years ahead of his time”.

He made 364 appearances in claret and blue, scoring 100 goals, before moving to Spurs in 1970 where he won two League Cups and a UEFA Cup. A true legend of the game and one of the greatest English midfielders of all time.

Bell was one of Manchester City’s best-ever players. The Colin Bell Stand at the Etihad Stadium is named in his honour. He was a fine, hard-working, midfielder who came in in the Post 66 years and was starting to look like a world-class player when injury broke him down.

In total, Bell won 48 caps and scored nine goals for England. He also led the England national team for a game in 1972. Bell is regarded as one of England’s finest ever midfield players, also described by one commentator as ‘the most finished article in the modern game’. He definitely earns a place among one of the greatest English midfielders of all time.

For the fans of Liverpool, Gerrard is nothing less than God. With so many great memories, it’s only normal for Liverpool fans to love him so much.

In his 17 seasons at Anfield, Gerrard won a total of two FA Cups, three League Cups, one UEFA Champions League, one UEFA Cup, one FA Community Shield and one UEFA Super Cup.

At the international level, the Liverpool icon and a legend of the game Steven Gerrard is the fourth-most capped player in the history of the England national team with 114 caps, scoring 21 goals.