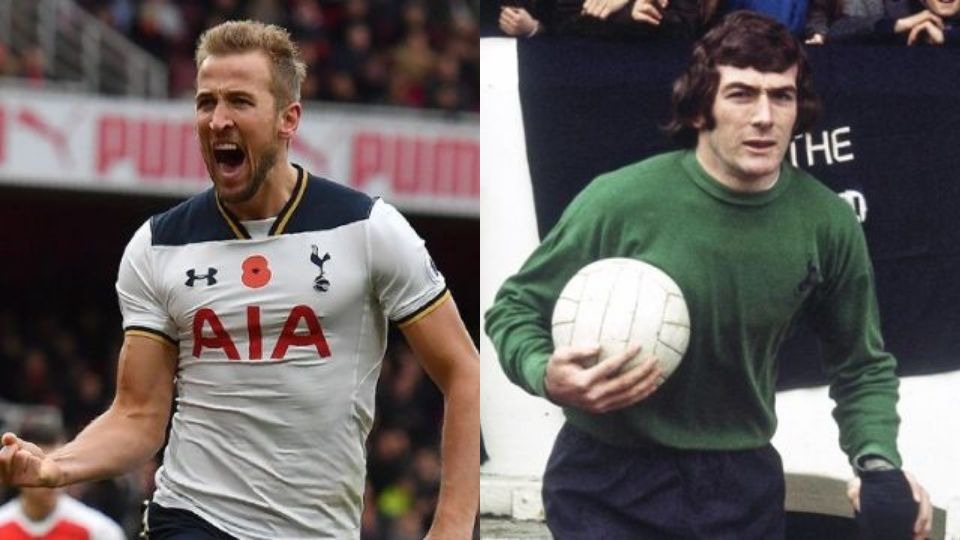 Tottenham Hotspur are one of the biggest clubs in England. They have often prided themselves on being a working man’s club, playing attractive football without splashing the cash. One thing is certain; they’ve always been an entertaining side to watch, regardless of the trophies won. Without further ado, let’s examine Tottenham Hotspur greatest XI of all time.

Based on the impact made on the team, here’s the Tottenham Hotspur greatest XI of all time.

Jennings made a huge impact at Watford which prompted Spurs manager Bill Nicholson to splash out £27k for a 19-year-old. The gamble paid off and it proved to be one of his greatest-ever signings. The young Irishman’s task was to replace Bill Brown of the double-winning side of 1960-61. And he sure lived up to the expectations.

Pat Jennings will be remembered as one of the finest goalkeepers to ever grace the game. He spent thirteen years at White Hart Lane, making more than 590 appearances for Spurs in all competitions. With Tottenham, he won the FA Cup in 1967, the League Cup in 1971 and 1973, and the UEFA Cup in 1972.

Cyril Knowles is one of the best left-backs to ever play for Spurs. Signed from Middlesbrough in 1964, Knowles went on to spend the rest of his playing career at White Hart Lane. He was known for his crossing ability and created countless opportunities from open play as well as set pieces.

He developed an excellent partnership with right-back Joe Kinnear and helped the team to win The FA Cup, two League Cups and the UEFA Cup in his time at Spurs.

Ledley King came through the club’s youth academy and went on to become one of the club’s most dedicated players. Unfortunately, his career was cut short due to injury, but whenever he played he made an impact. He suffered from a chronic knee injury, which really limited his abilities in one of his knees. Despite that, he played like a true leader whenever the got the chance to take the field.

After 13 seasons and 323 apps with the senior team, King announced his retirement in 2012. He deserves his place among the greatest Tottenham Hotspur XI of all time.

Steve Perryman is a Tottenham Hotspur legend; not just for success but also for his longevity and loyalty to the club. He played over 850 matches in all competitions and holds the record for most appearances for the club. Signing apprentice forms in 1967, Perryman made his senior debut in 1969. Even though he started as a midfielder, he would spend most of his career in the right-back position.

One of the most gifted players ever to play for Spurs, Dave McKay signed for the club in 1959 from Hearts. He had arrived with a big reputation as he was the captain of the Hearts team that won the Scottish League title with an incredible +103 goal difference in 1958.

McKay made an immediate impact at Spurs, playing alongside Cliff Jones, striker Bobby Smith and captain Danny Blanchflower. He played a major role in Tottenham’s FA Cup and League Championship ‘double’ success. He made over 300 appearances for Tottenham in total before transferring to Brian Clough’s Derby County in 1968.

Glenn Hoddle was one of the most naturally gifted English players of his generation. He possessed tremendous balance and close control, precise passing and extraordinary vision. He had great shooting ability, both from open play and set pieces. Hoddle joined the club as an apprentice in 1974 and soon turned pro. He absolutely lit up the Lane for 12 years with his ability to turn a game with a moment of magic.

He was one of the key players of the great Spurs team of the early 1980s that won two FA Cups and the UEFA Cup. The playmaker scored 110 goals in 490 first-team matches in all competitions before leaving for AS Monaco in 1987.

The greatest captain in the club’s history, Danny Blanchflower joined the club from Aston Villa in 1954 for £30,000. The fee was quite high for 28 years old at that time, but it turned out to be a fine investment. Blanchflower went on to play 382 matches for Spurs, where his vision ensured he was twice named English footballer of the year, in 1957/58 and 1960/61.

He captained Tottenham to the first league and FA Cup double of the 20th century in 1960/61, and led them to another FA Cup success the following season. His place in Spurs’ history was cemented in 1963 when he became the first captain of an English team to lift a European trophy when his team won the European Cup Winners’ Cup in Rotterdam beating Atlético de Madrid 5-1 in the final.

Paul Gascoigne was one of England’s brightest talents in the 80s and 90s. He was a complete midfielder, strong, alert, and vigilant. His sublime passing allied with the vision to provide rich passes for attackers.

He was part of the Spurs team that won the FA Cup in 1991 and he played a key role in that. For his contributions, Gascoigne was named on the PFA Team of the Year in the 1990–91 season. He made 122 apps, scoring 33 goals in four years with the club.

Gareth Bale started his professional career at Southampton, playing as a left-back. The ‘free-kick’ specialist was then signed by Spurs in 2007 for an eventual £7 million fee. At his new club, he was formed into a more attacking role and that brought the best out of him. Under the guidance of Harry Redknapp, Bale became an integral part of the team.

It earned him the PFA double – Player and Young Player – the Football Writers Association Footballer of the Year and Barclays Player of the Season.

Jimmy Greaves is one of the greatest Tottenham players ever and most certainly the greatest striker ever. He scored 268 goals for the club in just 381 games, making him one of the greatest goalscorers ever. He was known for his superb control and positional sense and was famed for coolly rolling the ball into the net rather than blasting it.

Greaves began his professional career at Chelsea in 1957 and despite a great scoring record, was sold to AC Milan in 1961. He failed to adapt in Milan and was soon returned to England with Spurs. His arrival made the Spurs double winning side even better. Whilst with Spurs he won the FA Cup twice; in 1961–62 and 1966–67, the Charity Shield in 1962 and 1967, and the European Cup Winners’ Cup in 1962–63. Although, he never won a league title but did help Spurs to a second-place finish in 1962–63.

Kane is one of the best strikers in world football right now. Even though he made his debut in 2011, it wasn’t until the 2014-15 season that he fully established himself in the team. He scored 21 PL goals that season and was named the PFA Young Player of the Year.

Kane has won the Premier League Golden Boot thrice. He also won the Golden Boot in the FIFA World Cup 2018. He has already scored 248 goals for the club in 386 games, an impressive scoring rate.

Checkout: 10 Greatest Tottenham Players Of All Time (irrespective of position)