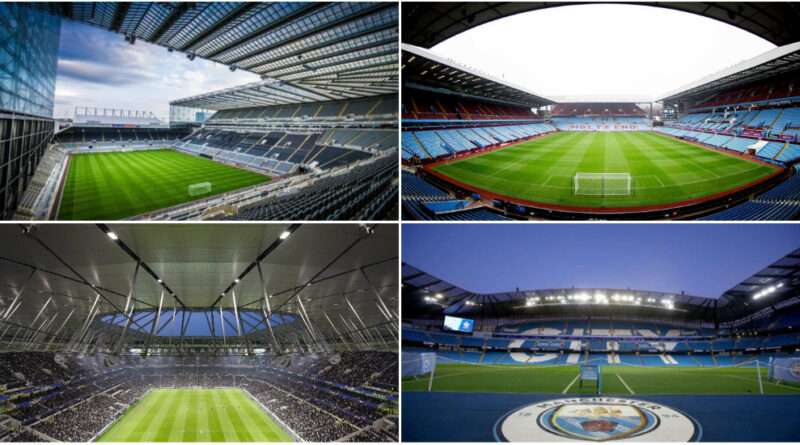 Stadiums are a sanctified place for football fans. The importance of a stadium for a fan is inexplicable, it’s like a home for a supporter. Being arguably the best league in the world, the Premier League has some of the finest stadiums in the world too. Old Trafford, Tottenham Hotspur Stadium, Emirates Stadium, and many more such Premier League arenas have the most electrifying atmosphere and the utmost aesthetic beauty.

In this article, we have ranked the 2022-23 Premier League stadiums from worst to best not only according to the atmosphere or the beauty but also keeping in mind the location, facilities, food, view, security, etc.

These stadiums are ranked according to the fan ratings on various websites such as footballgroundmap.com, the92.net, TripAdvisor etc. Here are the 20 Premier League stadiums from worst to best.

Dean Court, currently known as the Vitality Stadium is the home ground of AFC Bournemouth. It is the smallest stadium in the Premier League with a capacity of just under 12k. The club announced in 2017, that they will build a new stadium within Kings Park, which sits adjacent to their current home ground. But no work has started whatsoever.

Situated in Whitehorse Lane, London, Selhurst Park is the home of Crystal Palace. The stadium is renowned for its atmosphere. The home support Crystal Palace gets is quite astounding. The Holmesdale Fanatics fan group of the Glaziers always create a great spectacle in the stands and the fans being so close to the field adds to the spectacle. The Eagles’ home has got a capacity of 25,486 people. The maximum attendance recorded in Selhurst Park was 51,482. The stadium has got good value for money overall.

With a whooping capacity of 60,000, West Ham’s stadium is among the big grounds of the Premier League. It was basically constructed for the 2012 Olympics but in 2016 it was officially deemed as the home for the Hammers. West Ham doesn’t quite get the atmosphere they used to get in their previous stadium Boleyn Ground due to various factors but with the passage of time, they’ll get there. It is a beautiful big stadium with a good location and facilities.

Only 0.9 miles away from Anfield, the Merseyside football ground has been the home stadium of Premier League club Everton FC since its completion in 1892. it has an all-seated capacity of 39,414. The ground has seen a jaw-dropping maximum attendance of 78,299 people in the Merseyside derby against Liverpool in September 1948. Along with having good security, Goodison Park has got good stewarding service. The Toffees’ home ground has hosted more top-flight games than any other stadium in England.

One of the oldest stadiums in English football history, Molineux always has an exhilarating atmosphere. The club’s progression through the divisions in recent years has been aided by the club prioritizing a fierce atmosphere with the entirety of the ground getting behind their team. The stunning yellow color-based stadium has been renovated quite a few times in its lifetime and now its beauty is second to none and not only the beauty and atmosphere it has also got good facilities and a decent location.

Elland road sure is bouncing this season on Leeds’ long-awaited return to the Premier League. Leeds have a passionate fan base and they will be vigorously acting as the twelfth man in the stadium for Marcelo Bielsa’s men in this year’s Premier League campaign. It has been the home of Leeds United since the club’s inception in 1919 and with an all-seated capacity of 37,890. It has a record attendance of 57,892 which was set on 15th March 1967 in the FA Cup.

It is one of the most recently built stadiums in the Premier League. The stadium and the fans there provided a great hand in that iconic and remarkable 2016 Premier League-winning campaign for Leicester City. The loud chants from the stands kept intimidating every away team to visit the Foxes’ home ground. Special praise must also be given to the groundsman of the King Power stadium, the guy mows the ground like it is some kind of art. The beautiful patterns on the pitch are a treat for the eyes and add to the beauty of the stadium.