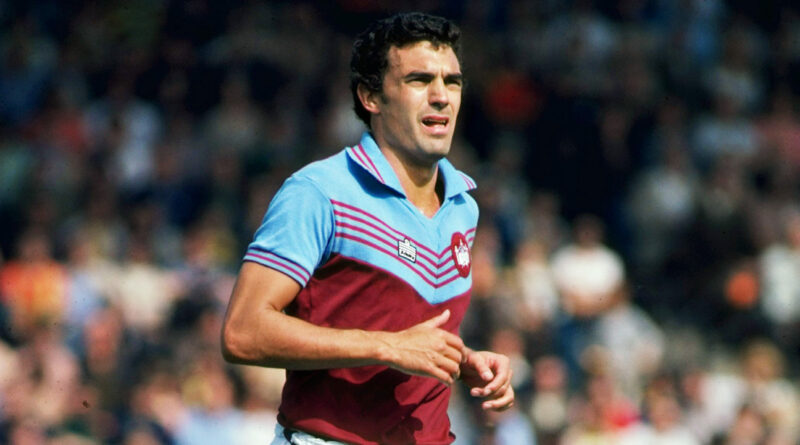 West Ham are one of the biggest clubs in England. They have a great and passionate fanbase. In their long and rich history, West Ham United have seen many ups and downs. During this period, many great players played for this club. In this article, we have ranked some of the greatest West Ham United players ever.

Based on the impact, consistency, longevity, loyalty, success and fans’ opinion, here are the greatest West Ham players ever.

Ray Stewart joined the club in 1979, from Dundee United for a fee of £430,000, making him the most expensive teenager in British football. The tough-tackling, indestructible, dependable right-back became a Hammers hero almost instantly, playing a key role in the 1980 FA Cup-winning team under John Lyall.

Ray clocked up a total of 432 appearances and won 10 caps for Scotland over the course of 11 years in the Claret and Blue, before departing in the summer of 1991.

Parkes was the most expensive goalkeeper in the world, when he was signed from West London club Queens Park Rangers. He won the FA Cup in his first season, making several fine saves in the final against Arsenal. He won the Hammer of the Year in 1981 and holds the record for the most consecutive clean sheets as well.

West Ham United have won the FA Cup three times in their history and Lampard was in the team for two of those triumphs. Lampard started at left-back as the Hammers defeated Fulham in May 1975, and he was there at left-back again five years later as John Lyall’s men got the better of Arsenal.

After spending 18 years, playing 660 games and scoring 22 goals, he left the club on a free transfer at the end of the 1984–85 season. By that time he had become one of the greatest West Ham United players ever.

Cottee spent two stints at the club with a spell, though it is his first spell that he is most remembered for. In the 1985–86 season, he formed a formidable partnership with Frank McAvennie that nearly led to a league championship.

Scott Parker only spent just four years at The Boleyn Ground, but made a huge impact and won Hammer Of The Year three times. Parker was a complete midfielder, capable of fine tackling, movement and passing. He was easily West Ham’s greatest player of the 2000s.

Parker was named Football Writer’s Player Of The Year in 2011 despite West Ham United finishing bottom of the Premier League. He also established himself in England’s team during this time.

Whenever Di Canio put on the West Ham shirt, or any other club shirt for that matter, he would give it his all. The reason he is widely regarded as one of West Ham’s greatest players probably comes down to his explosive yet fun-filled personality. He spent a relatively short time at Upton Park compared to the others on this list but still deserves his place in West Ham history.

Di Canio is West Ham’s greatest contemporary icon, resembling the style and skill which has been seen throughout football’s modern age of the Premier League and foreign imports.

His skill was undeniable and had been showcased during spells at footballing giants such as Lazio, Juventus and AC Milan. Di Canio’s career at West Ham was a huge success; the passion and emotion which he brought to the team made him a fans’ favourite instantaneously and it appeared he fell in love with the fans just as quickly.