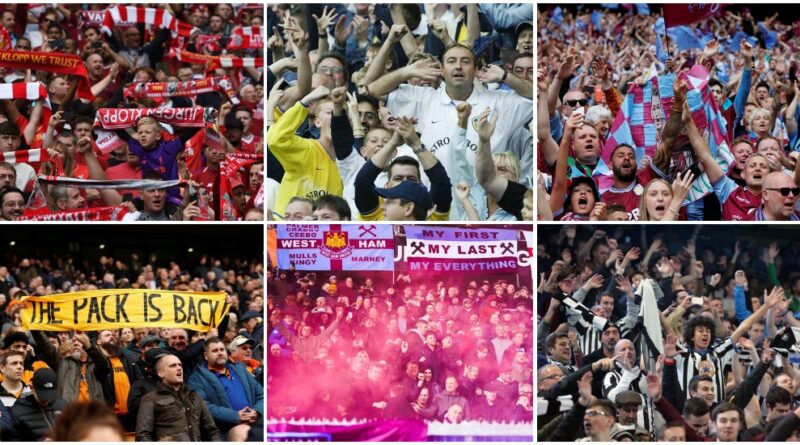 The Premier League is home to some of the best fan bases in world football. A large part of that is the away fans who travel across cities to see their team play. Not many countries boast the same kind of football fanatics as England with some supporters never missing a fixture home or away. So, today we’re ranking all 20 Premier League clubs’ away fans.

Turf Moor often creates a very good atmosphere that can be tough for the travelling teams. However, the journey away from home doesn’t have the same impact. They never really look to attack and dominate the away games, rather sneak draws here and there leading to a lack of expectancy in the away end.

Watford fans create a better atmosphere at the Vicarage than on the road. Their away fans although credited for making the journey never seem that noticeable and that has led to most of their famous results coming at home rather than away.

Brentford have made it to the Premier League for the first time ever. Their fans will look to enjoy their time in the top division. Based on this season, their away fans could be judged properly.

There’s no doubt regarding the passion and love of Brighton fans for their club. However, they can feel somewhat absent when travelling away grounds. It must be hard to go all the way up north for so many games and struggle to get results. They still show up in good numbers, but they aren’t as local as in home games.

Saint Mary’s Stadium is a tough place to travel because the fans create an intimidating atmosphere. But their away fans don’t have the same impact. Southampton tends to play beautiful attacking football home and away, so it can be said that support could be better from the travelling fans.

Norwich City does have some good away fans that support the team on road. Though they are not as vocal as during home games, their support can’t be understated. After a season in the second tier, the club is back in the Premier League and the fans will look to enjoy every minute of it.

In general, Leicester fans are much better at home rather than away where they can sometimes respect the opposition a bit too much. Nonetheless, the Foxes have a fantastic fan base, and as they cement themselves as a top Premier League team. They have consistently performed as a top team over the past few years, this should make the fans more vocal.

Manchester City’s away support is actually quite underrated. It certainly isn’t of the calibre of some of the other clubs in the league but it isn’t as absent as others might suggest. Full of fans who have been there from the start, they’re always determined to carry the club to more success. They are one of the best Premier League clubs away fans.

5 thoughts on “Ranked: All 20 Premier League Clubs’ Away Fans”