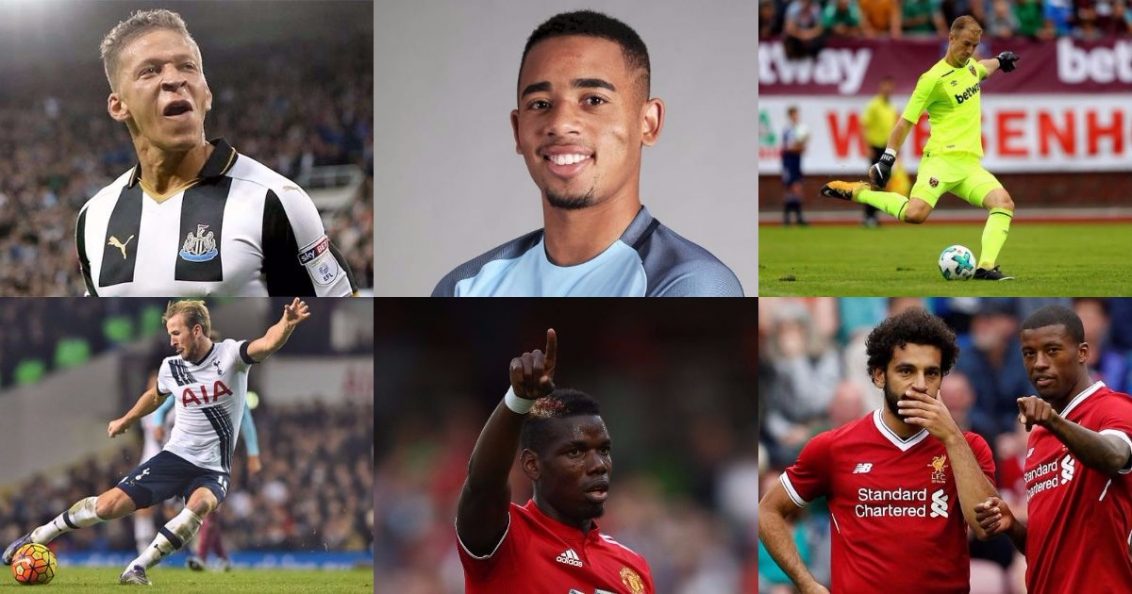 With only few days remaining for the start of a new Premier League season,we look at the players that can make an impact this season.Not only we have included new signings but also the players who have already plied their trade in the league.

Once a regular in the Manchester City’s team,Hart is now playing for West Ham;his third club in three years. Everything was going fine for the England’s No.1 at Manchester City before the arrival of manager Pep Guardiola,who decided not to keep Hart in the team as he was ”not good enough with his feet”.

Joe Hart was loaned out to Torino FC for 2016-17,where he had a mixed season.Hart decided to return to England following his 1-year spell with the Italian side.There were rumours of Joe Hart being given a chance to play for City in the 2017-18 season but eventually he was loaned to West Ham as City signed Brazilian goalkeeper Ederson Moraes and kept Claudio Bravo.

This season is going to be very crucial for Joe Hart as he aim to hold on to England’s No.1 spot with World Cup next year.

Mesa is now the third most expensive player in Swansea’s history, behind only Wilfried Bony and last season’s £15million signing Borja Baston. Las Palmas have won plenty of fans for the attractive passing football they have played under Quique Setien and Mesa has been key to that.

Roque Mesa had a great last season with Las Palmas and we wouldn’t be surprised if he turns out to be the bargain of the season.

Dwight Gayle enters a new season desperate to prove that he has Premier League class.Gayle’s last chance in the top flight ended in frustration when Crystal Palace used him sparingly in an injury-hit season for Alan Pardew’s Eagles – a season that led to him signing for Rafa Benitez’s United in a £12million deal.

Gayle finished last season as United’s top scorer in the Championship and he will hope to repeat the same in the Premier League this season.

Manchester United paid Juventus a then world record £89million to secure Pogba’s return to Old Trafford last summer, but he struggled to produce his best form in his first season.

Pogba enjoyed few good spells but nothing like what many people expected.Perhaps the pressure of £89million price tag also had a role in that.

However,the signing of workhorse Nemanja Matic should allow Manchester United to make better use of midfielder Paul Pogba and this may bring out the best of him.

The only positive from Sunderland’s disastrous last season was Jordan Pickford.Though he could not save Sunderland from relegation,but he earned a lot of admirers because of his outstanding skills and ability.

Even after Sunderland’s relegation, Pickford was able to earn himself a big-money move to Everton as part of Koeman’s bid to challenge the top-six of English football.

In Pickford, the Toffees have got themselves a fine young keeper, who many tip to be England’s No.1 in years to come.

Gabbiadini arrived in England in January after joining Southampton from Napoli, where he had struggled for game time.The 25-year-old hopes to represent Italy in next year’s World Cup and feels playing in the Premier League will give him the best opportunity to do so.

His sharp eye for a run and precision finishing saw him net six goals in his opening four Saints appearances.But his scoring streak ran dry after a groin injury.

After a good pre-season,Gabbiadini will look to hit the ground running this season.

Morata joined Chelsea on a deal reported to be worth an initial £58 million, potentially rising to £70m.He was mostly used as a rotational player for Real Madrid last season but still managed to score 20 goals in a campaign where his side won both La Liga and the Champions League.

The Blues hope Morata can fill the shoes of Diego Costa, who is not a part of Conte’s future plan and is expected to leave the club soon.

With guaranteed playing time,this could well be Morata’s best season in his career.

Switzerland international Granit Xhaka was brought to the Emirates with a view to adding steel to an Arsenal midfield that was missing a ball-playing enforcer.

However,his debut season at the Emirates was a little disappointing,mainly because of his ill-discipline.He hardly ever made an impact and cost his team on far too many occasions with his rash decision-making and horrific tackling.

His midfield partnership with Aaron Ramsey towards the end of 2016/17 showed signs of promise, and the former Borussia Monchengladbach man could shine this season if he improves his temperament and disciplinary record.

Burnley suffered 20 losses in the Premier League last season, but they conceded fewer than most of the teams around them in the bottom half of the table and, for that, Tom Heaton can take plenty of plaudits.

He made his England debut in April and believes staying with the Clarets can help his international chances.Heaton said: ‘For me it is about playing Premier League football and continuing to work away at the international set-up.

‘I’m delighted to be involved in that and have a taste for it and now I’ve got a hunger for more. I want to continue improving every day and I’m more than happy where I am at the moment.’

This season could be a make or break season for him if he wants a place in the England team for the World Cup next year.

Harry Kane has been in phenomenal form for the past three seasons,winning Golden Boot in two of those.He finished last season with 29 Premier League goals,despite suffering an ankle injury mid-way through the campaign and helped Tottenham to a respectable 2nd place finish.

The stats clearly demonstrate that the 23-year-old England international has steadily improved since his breakthrough at White Hart Lane, as he bagged 21 goals in 2014-15 and 25 in 2015-16 before hitting a career high last season. Such consistency means that Kane is certainly a player to watch out for in the next season.

West Ham landed a surprise signing ahead of the 2017-18 season with the addition of Javier Hernandez from Bayer Leverkusen.Chicharito sealed a £16million switch to the Hammers last month, returning to the Premier League two seasons after he left.

His 72 top-flight goals for Manchester United, Real Madrid and Leverkusen came at a rate of one every 134 minutes. That is top class and it shows that ‘Chicharito’ has plenty to offer for the Hammers and will be determined to show the kind of form that saw him hit double figures in each of his first three years at Man United.

Jesus made an instant impact after joining City from Palmeiras in January, with the Brazil international scoring seven goals in ten Premier League games,despite spending more than two months out due to foot injury.

Pep Guardiola also admitted that the sudden impact of Gabriel Jesus surprised him and now he expects the Brazilian to lead Manchester City’s attack for years to come.It will be interesting to see whether Guardiola will play him solo or partner him with Aguero.

If City can keep him injury-free this season,Jesus can set the Premier League on fire.

Liverpool signed Salah from AS Roma for a £39m, smashing the club record fee for Andy Carroll in the process.

The Egypt international already has experience of the Premier League, having made 13 outings during a brief ill-fated spell with Chelsea.However,Salah has now gained valuable experience by playing in Serie A and this could be vital for his success at Anfield.

Stoke’s £12m capture of Shaqiri in 2015 was massive. The arrival of the ex-Bayern Munich winger was supposed to take Stoke City to a new level. Two years on, we’re still waiting for that.

Shaqiri has been far from a disaster at Stoke, but he’s not done something great also. A glance at his highlights reel will reveal a few spectacular strikes, but dig a little deeper and you’ll discover many more indifferent performances.Infact he’s only managed seven top-flight goals in 48 appearances.

Shaqiri said the Potters are capable of replicating Leicester’s incredible title-winning achievement during the 2015/16 campaign despite his side only finishing 13th last season.This suggests that this could be the season when we get to see the best of Shaqiri in Stoke.

Iheanacho burst on to the scene during the 2015-16 Premier League season where he scored eight Premier League goals and had the best goals-per-minute ratio of any player averaging, a goal every 93.9 minutes.

Arrival of Pep Guardiola as Manchester City manager in the summer of 2016 was supposed to help him and bring the best out of him.However,it wasn’t to be,instead he saw his playing time being limited.

In search of more game time he has now joined Leicester City and this could be the perfect platform for him to showcase his talent to the world.