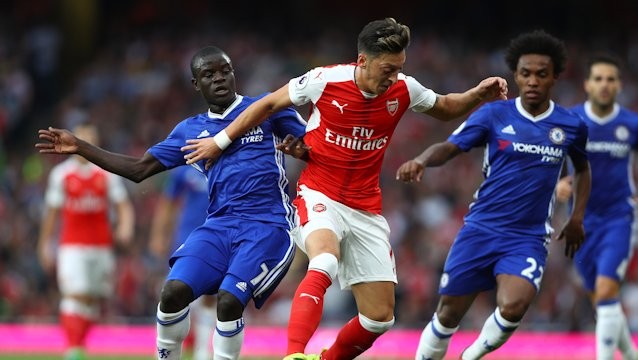 Arsenal and Chelsea are two of the biggest English Clubs to come from London.There is much dislike between the both sets of fans and it can be seen whenever they play each-other.Encounters between these two have produced many memorable matches and today let us have a look at some of the best Arsenal vs Chelsea matches.

Here are the top 10 best Arsenal vs Chelsea matches

In April 1979,struggling Chelsea visited Highbury looking for a victory that would keep their hopes alive of avoiding the relegation.

After a terrible first half Chelsea found themselves two-goals down courtesy of goals from David O’Leary and Frank Stapleton.Chelsea’s Clive Walker halved the deficit halfway through the second half, but as the visitors chased the game, Arsenal sealed their fate when Alan Sunderland’s 80th-minute strike opened the floodgates. David Price netted a fourth before Stapleton completed his brace with five minutes left to make it 5-1.

Chelsea’s Tommy Langley scored a late goal to make it 5-2,however it was just a consolation as Chelsea were relegated at the end of the season.

Chelsea had sacked manager Ruud Gullit just days earlier and went into this League Cup semi-final second leg 2-1 down from the first leg at Highbury.

However ,Chelsea’s new player-manager Gianluca Vialli savoured the sweet taste of victory in his first match with the Blues beating Arsenal 3-1 to win their semi-final 4-3 on aggregate.

Mark Hughes’s twist-and-shoot opener got the Blues off to the perfect start, which got even better shortly after half-time when Patrick Vieira earned a second booking for needlessly hauling down Graeme Le Saux. It got worse for Arsenal. Just three minutes later a stunning long-range strike from Roberto Di Matteo put Chelsea in control, before Dan Petrescu wrapped things up with a smoothly taken goal.

Michael Duberry, who had a superb game overall, handled the ball late on and Dennis Bergkamp slid home from the penalty spot to set up a grandstand finish.

But Arsenal, without the injured Ian Wright and several other key players, were unable to puncture the Chelsea defence and ultimately missed out on being the first team to claim England’s domestic treble after going on to win the Premier League and FA Cup.

Arsenal produced two moments of stunning quality to lift the FA Cup against Chelsea in Cardiff.

Ray Parlour struck a brilliant opener after 69 minutes and in-form Ljungberg unleashed an even better strike nine minutes later to clinch Arsenal’s victory with a flourish.

It also puts Arsenal on the brink of total domestic domination as they stand just one point away from the Premiership title and a repeat of their 1998 Double.

Checkout:Greatest Arsenal Players Of All Time

This proved a key victory in Arsene Wenger’s first title-winning campaign and one of the finest moments for long-serving left-back Nigel Winterburn.

Chelsea took the lead in the 40th min through Gus Poyet but Bergkamp’s double made it 1-2 in favour of Arsenal.Chelsea responded back with Zola and the game was nicely poised at 2-2.

In the 88th min, Winterburn unleashed a stunning 25-yard strike with his left foot that curled into the far top corner. Arsenal went on to win their first Double under Wenger.

After a 1-1 draw in the 1st leg of the Champions League quarterfinal,both teams were ready to give it all in the 2nd leg.

Wenger’s greatest Arsenal side were well on the way to achieving immortality as “Invincibles” when Chelsea arrived at Highbury as heavy underdogs, tasked with ending a 17-match winless run against their London rivals.

In an enthralling match, Jose Antonio Reyes fired Arsenal into the lead from close range in first-half injury time.

But Frank Lampard drew the Blues level after a Jens Lehmann to make it 2-2 on aggregate.

Then in the closing stages of the match,Wayne Bridge rifled home a left-foot finish on 87 minutes after being set up by Eidur Gudjohnsen to end Arsenal’s unbeaten run against Chelsea.

The stakes were high as this game was the League Cup final.Wenger surprised many by sticking to his guns and naming a team with a number of youngsters,while Mourinho took no chances and fielded his strongest XI.

Theo Walcott gave Arsenal the lead after ghosting past Ricardo Carvalho,only for Drogba to level against the run of play two minutes later.

Chelsea’s greater pedigree told after the break and Drogba won it when he headed an Arjen Robben cross past Almunia six minutes from the end.

A brawl erupted between the sides late on that led to dismissals for Mikel Jon Obi, Kolo Toure and Emmanuel Adebayor.

Chelsea’s first season back in the top flight under manager Tommy Docherty was a triumph. The standout result was a 4-2 win at Highbury, Tambling scoring all four goals on a mudbath, capitalizing on three mistakes by Ian Ure, the other a delicious lob. Before the game, Arsenal – built around the attacking talents of George Eastham, Joe Baker and George Armstrong, had held faint hopes of sustaining a title challenge, but they’d been found out. The result seemed to set both teams down very different roads.

Chelsea finished in fifth, three places ahead of out-of-puff Arsenal. Docherty’s side were instantly anointed as one of the teams of the decade. Tambling scored in their victorious League Cup final against Leicester in 1965, and the 1967 FA Cup final defeat to Spurs. And the club would round off the decade with their first FA Cup win in 1969-70.

Nigerian striker Nwankwo Kanu scored three goals in the final fifteen minutes as Arsenal came from behind to inflict a memorable defeat on arch-rivals Chelsea.

It was a fiercely-fought London derby which Chelsea appeared to have sewn up with half and hour to go thanks to two headers from Tore Andre Flo and Dan Petrescu.

But then Chelsea collapsed under a furious Arsenal comeback – keeper Ed De Goey, who had not conceded a Premiership goal at Stamford Bridge until this match, let in three second-half goals.

Kanu rattled in goals in the 75th, 83rd and 90th minutes to seal victory.De Goey may not be blamed for the first two but he handed Arsenal victory in stoppage time when he mistakenly raced out of his penalty box allowing Kanu to grab the match-winner.

Arsene Wenger’s 1000th game in charge of Arsenal was supposed to be a celebration but Jose Mourinho revelled in turning it into a nightmare.

Arsenal were two behind after seven minutes, with first Samuel Eto’o and then Andre Schurrle benefiting from clinical Chelsea counter-attacking.

Eden Hazard’s penalty after a Alex Oxlade-Chamberlain handball all but finished the match as a contest.Oscar scored twice before Mohamed Salah inflicted more pain on the Gunners.Substitute Salah’s strike completed a miserable afternoon for the visitors.

It was Jose Mourinho’s biggest Premier League victory as Chelsea manager and also the first time in Chelsea’s history that they have scored six times against their London rivals.

Robin van Persie led Arsenal to one of their finest moments at Stamford Bridge, the Dutch striker netting a hat trick as the Gunners twice came from behind for a memorable victory.

Frank Lampard had headed Chelsea in front after 14 minutes but Van Persie put Arsenal back in contention from Gervinho’s pass.

But they were only level for 10 minutes as John Terry bundled the ball past Szczesny after out-muscling Per Mertesacker at a corner to give Andre Villas-Boas men the lead.

The teams had not even been out for 40 seconds in the second half when Van Persie registered another chance. Ramsey also went close, but it was Santos who got the equaliser for the visitors.

Outstanding Theo Walcott put Arsenal ahead for the first time before Juan Mata’s spectacular strike set up the finale to an enthralling encounter.

As Chelsea chased a winner, Terry’s slip allowed Van Persie in on goal, and the Dutchman rounded Petr Cech to score with five minutes left. To make matters worse for the hosts, Van Persie completed his hat-trick in stoppage time with a thumping shot.