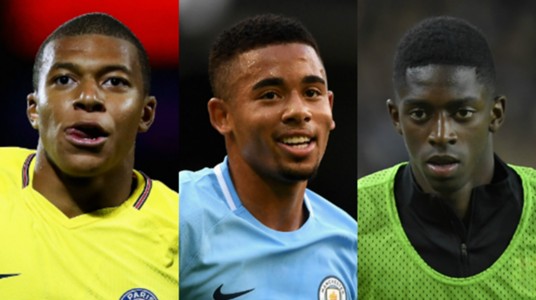 A list of the most valuable young footballers has been revealed by the CIES Football Observatory, with a number of Premier League stars from Manchester United and City making the top ten in the world.

The list is of players aged 21 and under and includes some top class talents like Kylian Mbappe and Ousmane Dembele, and there’ll be few surprises in terms of the selection who made the top ten.

Here’s a look at the ten most valuable young footballers on the planet – did anyone from your club make the list?

A fine summer signing by Tottenham, Davinson Sanchez has settled in instantly in the Premier League to become first choice in Mauricio Pochettino’s side.

Signed on a six-year contract for a reported transfer fee of up to £42 million,he is one of the best young Centre-Backs in the league. He was named as best player of the season for Ajax last season.

After scoring 10 and assisting 8 in just 15 games with the Dortmund youth teams,Pulisic was called to join the first team. He became the youngest foreigner to score a goal in the Bundesliga. A real talent.

A player in lethal form right now, 21-year-old Anthony Martial is a key part of this Manchester United side and looks set to make a big impact for France at next summer’s World Cup. He was one of the recipient of the 2015 Golden Boy Award for the best under-21 player in Europe.

He scored in his first match for United, and was named the Premier League Player of the Month in his first month in English football. He finished the season as the club’s top scorer in both the league and overall competitions with 11 goals and 17 goals respectively.

Banging the goals in right now for RB Leipzig, Timo Werner is the latest big talent coming out of German football.

Werner ended the 2016–17 Bundesliga season with 21 goals, making him the highest German goalscorer in the division. His goals helped RB Leipzig to qualify for the UEFA Champions League for the first time in the club’s history.

No surprises here as Kylian Mbappe tops the list of the most valuable young footballers on the planet, with the 18-year-old enjoying a stunning breakthrough season for Monaco last year before his big move to PSG this summer.

He became the second youngest French scorer in UEFA Champions League history behind Karim Benzema. At the age of 17 years and 62 days, he became the youngest first team goalscorer in Monaco’s history—once again displacing Henry in the process.

At PSG ,he has become an important part of the team. He along with Neymar and Cavani forms one of the deadlist trios in the world.