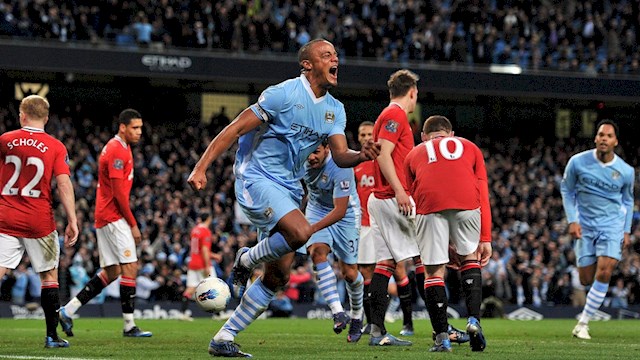 With the Manchester Derby coming up,the tension in the both camps of Manchester is rising. Let us have a look at the history of Manchester Derby. The first league meeting between the two sides occurred in the 1894/95 season, with Newton Heath(which later became Manchester United) beating Manchester City 5-2. Before the war it was a common occurrence that supporters would watch City one week and then United the next. After the war this changed as a rivalry started to form and following both teams became uncommon.

With so many great matches played between them ,its hard to pick ,Greatest Manchester Derbies Of All Time’.

But we have picked our 10 Greatest Manchester Derbies Of All Time! Have a look-

This meeting ranks as one of the finest of the Manchester derbies. United’s team boasted Best, Law and Charlton and were top of the table. City had Lee, Summerbee and Bell and were three points behind in third.

United went two up, with 17-year old debutant Sammy Mcilroy opening the scoring and Brian Kidd doubled the lead. Lee pulled one back with a 57th minute penalty and then set Bell up to equalise with 25 minutes left.  United went back in front three minutes later before City equalised, Summerbee smashing it in off the underside of the bar.

A surprisingly drab encounter at Old Trafford looked like fizzling out into a draw when David Silva’s effort 25 minutes from time cancelled out Nani’s first-half opener. That all changed in a moment when, in the 78th minute, Nani’s speculative cross from the right curled towards the corner of the box. Rooney, with his back to goal, defied the looming defenders as he leapt into the air and fired a crisply-struck bicycle kick straight into the top corner. This is 9th best among ‘Greatest Manchester Derbies Of All Time’.

City had not beaten their rivals for thirteen years, but enter Shaun Goater who changed all that. This was Kevin Keegan’s first and City’s last derby at Maine Road.

Nicolas Anelka put City ahead on five minutes after a crazy fumble by the erratic Fabien Barthez only for Ole Gunnar Solskjaer to equalise three minutes later.  Gary Neville had never become so popular at Maine Road as his error allowed Goater to score his first and Eyal Berkovic set him up for his second after more comical defending from United. This classic game is 8th among ‘Greatest Manchester Derbies Of All Time’.

It remains as United’s biggest derby victory as a hat-trick from Andrei Kanchelskis and a masterful display by Eric Cantona condemned City to defeat.

This game showed United at their mercurial best with the sublime skill of Cantona and the tenacity of Roy Keane in midfield. Mark Hughes scored the fifth, but in truth it could have been a lot more.

City celebrated their return to the First Division in style with a victory that would give them the city bragging rights – for a couple of seasons, at least.

United, still yet to blossom under Sir Alex’s stewardship, were at sixes and sevens defensively as the hosts ran riot at Maine Road.A slip from Gary Pallister let in David Oldfield for the first, before even worse defending allowed Trevor Morley a second.

Ian Bishop soon bagged No.3 with his first City goal (one of only two he’d score for the club), before Mark Hughes’ brilliant scissor provided brief hope for the visitors.

Brief was all it was, though, as Oldfield nabbed his second of the game to restore City’s three-goal lead. Mel Machin’s troops made it an occasion to remember when left-back Andy Hinchcliffe capped a glorious City move with a thundering header at the back post.

The teams would finish just a place apart in the final standings, United edging it with a superior goal difference. City, however, felt like they’d won the main battle.

United legend Denis Law is one of a select few who have crossed the city divide, and one of an even smaller group to have scored against his former club. The goal, a delightful backheel, came at the end of the 1973-74 season in a 1-0 City win at Old Trafford which is widely, credited with sealing United’s relegation to the Second Division. In fact, the goal was irrelevant as United were already doomed, but nevertheless Law was left visibly distraught by the goal and was eventually substituted.

Rooney grabbed the opener with a scuffed finish, before making it two in the 29th minute after converting Rafael’s cross from the right.

But champions City didn’t lie down without a fight. Toure halved the deficit on the hour mark after some penalty-area pinball and, with just four minutes left on the clock, Pablo Zabaleta crashed home a loose ball from Tevez’s corner.

It seemed like the game will end in a draw but the second minute of injury-time, Robin van Persie’s deep free-kick evaded all  before nestling in the bottom corner, prompting exuberant celebrations from the United players.

A match that City fans will never forget, nor will United fans. Mario Balotelli broke the deadlock on 22 minutes and duly celebrated by brandishing a t-shirt with “Why Always Me?” slapped across the front. And yes, he was booked for it. Balotelli notched his second shortly after and Sergio Aguero added a third, while substitute Edin Dzeko helped himself to a quickfire brace in between David Silva’s late fifth.

It was the first time since 1926 that City had scored six at Old Trafford. City also won the return and won the Premier League for the first time.

Wayne Rooney slotted United ahead inside two minutes, before City new boy Gareth Barry bagged his first goal for Mark Hughes’s men. Darren Fletcher headed home four minutes after the break, only for Craig Bellamy to curl home a beauty from the edge of the box soon after.

Fletcher would provide another with his noggin 10 minutes from time only for Bellamy, once again, to pounce in the last-minute after Rio Ferdinand’s sorry blunder.

But that wasn’t the end. Deep into stoppage-time – the 96th minute, in fact – Ryan Giggs’ sumptuous through ball found Michael Owen, who produced his most memorable United moment to send Old Trafford into raptures.

Manchester City took control of the Premier League title race with two games remaining thanks to a derby victory over rivals Manchester United.

Billed as the biggest derby ever at the time, with a win for either side likely to prove decisive in the outcome of the title race. City needed victory while Sir Alex Ferguson knew a draw would suit his purposes more than opposite number Roberto Mancini.

Vincent Kompany’s header won the game for City, who went on to win their first title in 44 years and prove their status as Manchester’s new dominant force.

One thought on “10 Greatest Manchester Derbies Of All Time”