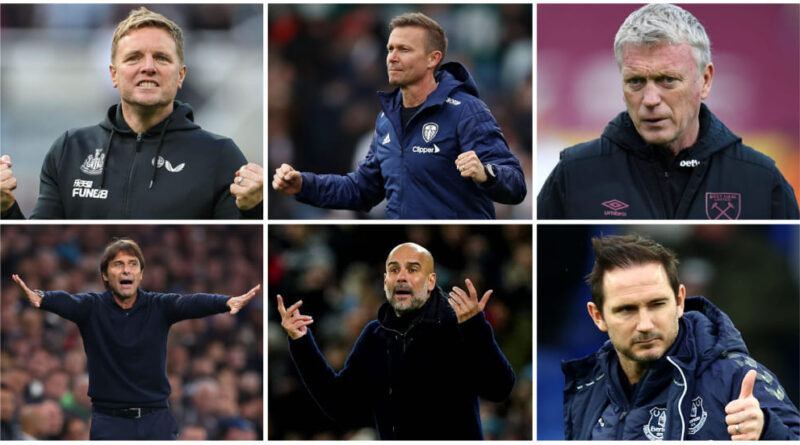 The role of a manager is unquestionably the most important for the success of a team. You could have a godly squad but could still end up trophyless if the manager is unable to use his players properly. A lot of managers are sacked when the results don’t come in for the teams whereas some managers enjoy an extended run even if the results aren’t great. Here, we have ranked the 2022-23 Premier League managers from worst to best to get an idea of how teams have fared in the season so far.

We have only included managers who have managed 10 or more games this season.

Steven Gerrard was sacked by Aston Villa on 20 Oct 2020, after just winning 2 of their first 12 Premier League matches. He was appointed as the club’s manager just over a year ago in Nov 2021 with the hopes of getting the club back on track. Gerrard did a decent job leading Villa to a 14th-place finish last season but couldn’t continue that this season. He has been replaced by former Arsenal manager Unai Emery.

Frank Lampard has done a subpar job as the manager of Everton. However, there are a lot of problems with the club which showcase the position that Everton currently find themselves in. They are currently in 17th position, just marginally out of the relegation zone. They have 3 wins and 7 losses out of their 15 games. The only positives for Everton are that they are improving in their defence and Alex Iwobi is doing extremely well.

Nottingham Forest got 21 new players in the summer transfer window but they have nothing to showcase for as they find themselves in the relegation zone with the second-most number of goals conceded in the league so far. The chances of Steve Cooper continuing as the manager look bleak and it’s going to take a lot of effort on the part of the squad and manager to avoid relegation.

Ralph Hasenhuttl managed Southampton for four years before being let go in Nov 2021. In these four years, he suffered two 9-0 losses but was lucky enough to not get the axe. However, a poor start to this season led the club to sack him. At that time, Southampton were struggling in the relegation zone with just 12 points after 14 matches. He has been replaced by Nathan Jones as the new head coach of the club.

West Ham have made a really poor start to the season with just 14 points in the first 15 matches. A few poor results could lead to the end of Moyes’ tenure at the club. David Moyes have a lot of work to do after the World Cup break if he intends to save his job and take West Ham to anywhere near last season’s position of 7.

Brendan Rodgers must be feeling the heat at Leicester City. Foxes had a poor start to the season, however, they have made quite a turnaround following their 6-2 loss to Tottenham. Up until that moment, they were the only team who hadn’t won a game in the league. However, after that horrendous performance against Spurs, Leicester have won 5 games out of 8 and are currently sitting in the 13th position. James Maddison is going through his purple patch and is the sole reason why Brendan Rodgers finds himself still managing Leicester City.

Gary O’Neil took over the squad from Scott Parker following the 9-0 defeat against Liverpool. O’Neil started off strong given the squad he had at his hands as he went 6 games unbeaten. However, it’s only gone downhill from there as Bournemouth lost 4 consecutive games in the Premier League. They are currently placed 14th in the points table and have conceded the most number of goals in this season; 32.