Below is our list of most popular sports in the world.The ranking is based on combination of different factors which include,largest number of fans,mostly played.

Volleyball is a team sport in which two teams of six players are separated by a net. Each team tries to score points by grounding a ball on the other team’s court under organized rules.

The complete rules are extensive. But simply, play proceeds as follows: a player on one of the teams begins a ‘rally’ by serving the ball (tossing or releasing it and then hitting it with a hand or arm), from behind the back boundary line of the court, over the net, and into the receiving team’s court. The receiving team must not let the ball be grounded within their court. The team may touch the ball up to 3 times but individual players may not touch the ball twice consecutively. Typically, the first two touches are used to set up for an attack, an attempt to direct the ball back over the net in such a way that the serving team is unable to prevent it from being grounded in their court.

The rally continues, with each team allowed as many as three consecutive touches, until either (1): a team makes a kill, grounding the ball on the opponent’s court and winning the rally; or (2): a team commits a fault and loses the rally. The team that wins the rally is awarded a point, and serves the ball to start the next rally. A few of the most common faults include:

The ball is usually played with the hands or arms, but players can legally strike or push (short contact) the ball with any part of the body.

Most popular regions to play the sport-Europe,Australia,Asia,USA

Tennis is a racket sport that can be played individually against a single opponent (singles) or between two teams of two players each (doubles). Each player uses a racket that is strung with cord to strike a hollow rubber ball covered with felt over or around a net and into the opponent’s court. The object of the game is to play the ball in such a way that the opponent is not able to play a valid return. The player who is unable to return the ball will not gain a point, while the opposite player will.

Most popular regions to play the sport-Europe,Asia,America

The game can be played on a grass field or a turf field as well as an indoor board surface. Each team plays with eleven players including the goalie. Players use sticks made out of wood or fiber glass to hit a round, hard, rubber like ball. The length of the stick depends on the player’s individual height. Only one side of the stick is allowed to be used. Goalies have a different kind of stick. Theirs has another curve on the end of the stick. The uniform consists of shin-guards, cleats, skirts (usually referred to as kilts) or shorts, a mouth guard and a jersey.

Most popular regions to play the sport-Europe,Asia,America,Africa

Cricket is a bat and ball game played between two teams of 11 players each on a field at the centre of which is a rectangular 22-yard-long pitch. The game is played by 120 million players in many countries, making it the world’s second most popular sport. Each team takes its turn to bat, attempting to score runs, while the other team fields. Each turn is known as an innings.

The bowler delivers the ball to the batsman who attempts to hit the ball with his bat away from the fielders so he can run to the other end of the pitch and score a run. Each batsman continues batting until he is out. The batting team continues batting until ten batsmen are out, or a specified number of overs of six balls have been bowled, at which point the teams switch roles and the fielding team comes in to bat.

Most popular regions to play the sport-Asia,Australia,UK 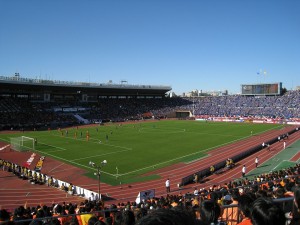 Football  is a sport played between two teams of eleven players with a spherical ball. It is played by 250 million players in over 200 nations, making it the world’s most popular sport. The game is played on a rectangular field with a goal at each end. The object of the game is to score by getting the ball into the opposing goal.

The goalkeepers are the only players allowed to touch the ball with their hands or arms while it is in play and only in their penalty area. Outfield players mostly use their feet to strike or pass the ball, but may also use their head or torso to do so instead. The team that scores the most goals by the end of the match wins. If the score is level at the end of the game, either a draw is declared or the game goes into extra time and/or a penalty shootout depending on the format of the competition.

Most popular regions to play the sport-Whole world