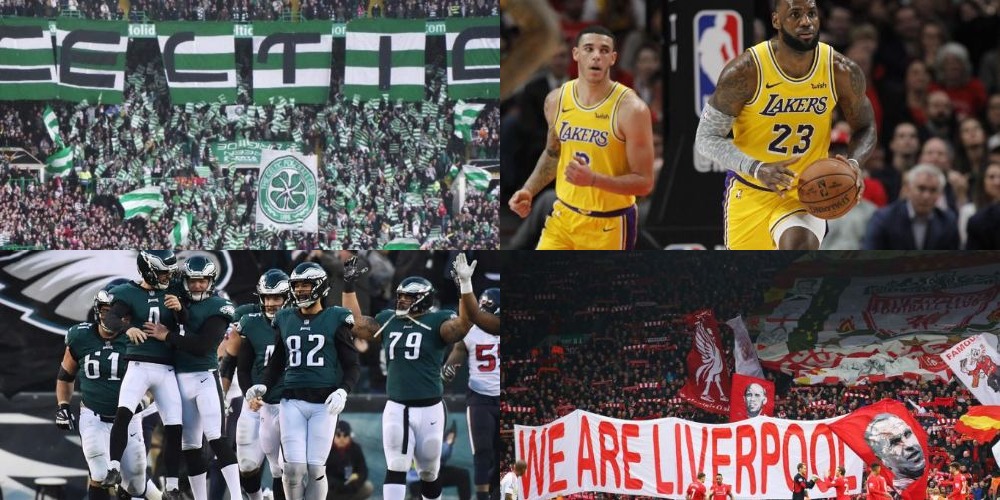 Considering various factors like ticket sales, merchandise sales, social media fans, brand value, stadium noise, hype and some other factors, here are the 15 most passionate fan bases across all sports.

The New England Patriots were among the first sports dynasty of the 2000’s, and that reignited a fanbase that has always been passionate. This magical era with Bill Belichick and Tom Brady has made the Patriots’ fans into one of the most passionate groups in sports.

The Patriots joined the NFL in the 1970 merger of the two leagues. The team changed its name from the original Boston Patriots after relocating to Foxborough in 1971. The Patriots played their home games at Foxboro Stadium from 1971 to 2001, then moved to Gillette Stadium at the start of the 2002 season. The Patriots’ rivalry with the New York Jets is considered one of the most bitter rivalries in the NFL.

English football club, Liverpool has one of the most passionate fan-bases in football. There are very few things more stirring in football across the world than hearing Liverpool supporters passionately belt out ‘You’ll Never Walk Alone’.

Games against Manchester United, Manchester City and Everton—whose atmospheres have been described as “suffocating” and “not for the faint of heart”— creates an unmatched atmosphere.

Buoyed by their European success, Liverpool’s supporters have stood by their team and hope that Jurgen Klopp can bring more glory days back to the red half of Merseyside. They are undoubtedly one of the most passionate fan bases across all sports.

The Lakers are one of the most successful teams in the history of the NBA, and have won 16 NBA championships, the second-most behind the Boston Celtics. They’ve built quite the fan following because of that. It also helps that they play in a huge sports market.

In 1980s Lakers were nicknamed “Showtime” due to their fast break-offense led by Magic Johnson. The team won five championships in a nine-year span, and contained Hall of Famers Johnson, Abdul-Jabbar, and James Worthy, and was led by Hall of Fame coach Pat Riley.

While they’re facing a rough patch right now, their fanbase continues to look to the future in hopes that Lebron James will help them return to their championship ways in style.

While the Seahawks are often the focus of bandwagon jokes, a fair amount of credit should be given to the longstanding fans of the great city of Seattle. Seahawks fans have been referred to collectively as the “12th Man”.

The Seahawks’ fans have twice set the Guinness World Record for the loudest crowd noise at a sporting event, first registering 136.6 decibels during a game against the San Francisco 49ers in September 2013, and later during a Monday Night Football game against the New Orleans Saints a few months later, with a then record-setting 137.6 dB.

The “12th Man” fan-base has already carved out a spot as one of the most passionate fan bases across all sports, considering the fact that they very nearly cause earthquakes at every game and forced the NFL to implement a noise rule (which they still break every game).

Pitsburgh Steelers fall into the ”crazy” category because of the atmosphere fans create at Heinz Field on a regular basis. They are an intimidating fan-base to deal with as an opposing team coming into town. The Steelers have always had the image of a rough-around-the-edges, hard-nosed football team, and their fans personify that image to a tee.

Pittsburgh Steelers fans are known for stealing the scene and invading the bleachers when it comes to watching their favorite team play. Their devotion to the team is so great that they are widely considered one of the most traveled fan bases in the league.

Another show of loyalty on the part of this intense fandom is the fact that they have easily bought out over 330 straight home games. Just to give you an idea why that’s so significant: NFL teams usually play eight home games per year in a regular reason. This means that Steelers fans have bought out all possible home games for over 40 years.

Galatasaray boast a following of almost half of Turkey’s football-supporting population, and their Turk Telekom Arena stadium is billed as one of the most challenging football stadiums for teams to visit in Europe.

The fans are always behind the team and it’s common to see flares add to the ambiance at their ground, to accompany the volume. They are at their most intense in their derby games and European matches.

They made news in 1993 when they gave visiting Manchester United the infamous “Welcome to Hell” treatment. From the very second they arrived at the airport, the United fans were hunted and hounded by the intimidating Turkish supporters.

The St. Louis Cardinals are the Southern Midwest’s team of choice and are often referred to as “Redbird Nation”. The Cardinals are popular in regions like rural Indiana and Missouri, western Illinois, Iowa, Memphis, Arkansas and Western Kentucky.

The team has 11 World Series titles which is second to only the New York Yankees. The team’s two biggest rivalries are the Chicago Cubs and Kansas City Royals. Every October, the playoffs present a time for the city and its fans to rejoice as the team goes for another World Series title. Very few fan bases are as passionate with such a competitive team, which makes them one of the best fan bases in all of sports.

Philadelphia gets the reputation for being a very critical fanbase. While they surely are that way, they really get behind the Philadelphia Eagles no matter what. They’ll boo the team when they’re not doing well, but they show up in great number to provide their team home-field advantage.

They’re fiercely loyal, staying with the Eagles through the disappointing ’90s to the Andy Reid/Donovan McNabb near-successes all the way to a Super Bowl win in 2018.

Together, the Green Bay Packer fans are referred to as “The Cheeseheads.” The Packers are a unique franchise in that they are the only “community owned” team in the league.  Meaning, that residents of Green Bay have some ownership stake in the team and the entire franchise is essentially non-profit because it is not privately owned.

According to Forbes, Green Bay is the NFL’s smallest market with a metro population of over 300,000. Not a remarkably huge market, but did you know that only 16 percent of that population are NOT Green Bay fans. The Packers also have social media on their side with over 4 million backers on Facebook and over 700,000 on Twitter. Of course, it also helps that the Packers have an NFL record of 13 championships, easily making them #1 in the eyes of the league when it comes to having the best fandom around.

The Montreal Canadiens, or “Habs” as they like to be called, are one of the most storied franchises on the planet. They are one of the six original NHL teams and have a league record 24 Stanley Cups. With that kind of history comes a lot of fans. Attending a Habs game at the Bell Centre is one of the neatest experiences in the NHL.

Every single home game has been sold out since 2004. Also note that the Bell Centre is the NHL’s largest arena with a capacity of 21,273.

The city lives and breathes hockey. It is the oldest team in the NHL, as they have existed as a club since 1909. They have the most Stanley Cup titles of any NHL team and their fan base is known to be the most loyal and passionate in the league. There have been riots when the team has made a playoff exit since their last Stanley Cup win in 1993. These fans don’t like to lose and they take it out on their lovely city once in a while.

Despite all the fame, glory and respect the big European football clubs get, you’d be hard-pressed to find a more passionate, emotional and crazier fan-base than you would at Celtic Park. The team has a long-standing tradition in the Scottish Premiership and their fan-base is just as legendary.

They often drowning out the sound of commentators with their loud chants and constant jumping up and down in unison while the game is ongoing. Even their celebrity fans are more passionate than anyone else, as Rod Stewart literally wrote a song about them and wept when they beat Barcelona a few years back.

This fanbase was the best in sports even before they finally ended their long World Series drought, and now that the team revived its championship pedigree, they’re an even better fanbase. They still have the passion they had before they were successful, but now they have the expectation for success that makes them even more passionate than in the past.

The fans occupy perhaps the most historic ballpark in all of baseball at Fenway Park. The party begins three hours before each game on Yawkey Way just outside of the stadium. The Red Sox have their share of celebrity fans in Mark and Donnie Wahlberg, Ben Affleck, Matt Damon, Stephen King, rapper Lil’ Wayne and writer Bill Simmons. They have strong hatred of the New York Yankees and their fans in what many would call the best rivalry in all of sports.

The sea of yellow you’ll find at a Borussia Dortmund match is as stunning an image of a fan-base as you’ll find in sports. The club is often considered the “B team” of fans globally simply because it’s easy to want to be a part of the atmosphere that manifests itself at one of their games.

At any home game, there are close to 25,000 Borussia Dortmund supporters in standing room only sections, puting them among the most passionate fan bases across all sports. Sections could be upgraded to create more revenue, but haven’t been because the atmosphere would suffer.

The Oakland Raiders fan-base lands on the top two of this list because if there was any fan-base that truly and fully encapsulated the definition of the word “crazy,” it would be those who rock the Silver and Black. Every game-day looks like a Halloween convention, and Raiders fans are raised and bred from a young age to be the most intimidating, wild and raucous band of supporters you’ll find anywhere in the world.

The team departed Oakland to play in Los Angeles from the 1982 season until the 1994 season before returning to Oakland at the start of the 1995 season. The Raiders have 14 former members who have been enshrined in the Pro Football Hall of Fame. They have previously played at Kezar Stadium in San Francisco, Candlestick Park in San Francisco, Frank Youell Field in Oakland, the Los Angeles Memorial Coliseum in Los Angeles, and RingCentral Coliseum in Oakland.

The most intense fan base in professional sports is not really in question. There are large fences around the stadium to protect the players in case the fans get too crazy and charge the field. The Boca Juniors have a long history of violence associated with their team’s wins and losses.

In Argentina, everything is about football and the Boca Juniors represent the working class portion of their population. This goes against the more upper-class fan base of their rivals, River Plate. This rivalry is generally considered to be one of the most intense in all of sports. The stadium in which they play has been know to literally shake from all the jumping and song-singing that comes with one of their games.