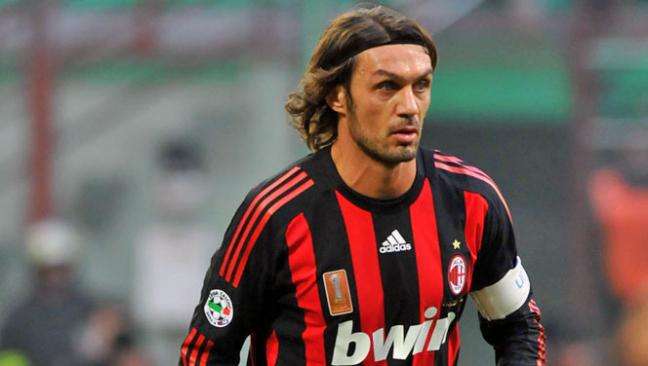 With 18 officially recognised UEFA and FIFA titles, AC Milan are the fourth most successful club in the world in terms of the number of international titles. Milan have also won the European Cups on seven occasions, second only to Real Madrid. Many great players have played for the ‘Rossoneri’ over the years. In this article, we will have a look at some of the greatest A.C. Milan Players ever.

Considering factors like loyalty, skills, efficiency, and impact on the club, here are the 10 greatest AC Milan players ever.

In Filippo Inzaghi, AC Milan had one of the finest strikers of a generation, as the Italian graced the club for 11 years between 2001 and 2012. Joining the club from rivals domestic Juventus, Pippo, as he’s fondly referred to, made over 200 appearances for the club, scoring 73 goals in all competitions.

Inzaghi won two UEFA Champions League titles (2003, 2007), and two Serie A titles (2004, 2011) with Milan. He said after the 2007 Champions League final in Athens that, ”It’s a dream since I was a child to score twice in the final, and the ones I scored yesterday evening were the most important in my life. It was an unforgettable game. It’s something that will stay with me all my life and two goals in the final speaks for itself.”

Reaching his peak on the brink of the Messi-Ronaldo era, Kaká occupies a unique place in football history. For a brief period of time, Kaká was, without doubt, the best footballer in the world.

Kaka arrived from Sao Paulo in 2003. With his good feet and great sprint speed he immediately helped Milan to their seventeenth league title. The Brazilian’s exponential growth culminated in the extraordinary 2006/07 season when he scored 10 goals and led the team to the Champions League final victory in Athens, after an unforgettable brace to Manchester United in the semi-final.

He received the Golden Ball and FIFA World Player awards in 2007, Kaká also won the European Super Cup and Club World Cup. He won everything of note with the Rossoneri and earned his place among AC Milan legends.

With technique, power, and physicality, Gullit was the perfect partner to Marco van Basten and, Frank Rijkaard. They allowed Milan to dominate unchallenged in Italy and in Europe between the late 1980s and early 1990s.

When he arrived at Milan, Gullit initially struggled to settle as he didn’t know Italian and was unused to living in a foreign country. However, Gullit’s first season at Milan saw the club win Scudetto for the first time in 9 years.

A member of some of the greatest club teams ever assembled, Gullit won the Ballon d’Or in 1987 rocking his iconic dreadlocks.

Part of a long, laundry list of absolute legendary center-backs to grace the red & black shirt, Costacurta, honestly, is probably massively underrated simply because so many amazing defenders have played with the Rossoneri.

He was a home-grown talent. Under the guidance of Arrigo Sacchi, he finally expressed his full potential, finding his ideal position next to Baresi. Precise, disciplined, endowed with extraordinary tactical intelligence, he won everything during his very long career.

Costacurta became the oldest footballer ever to play in the Champions League, in Milan’s 1-0 loss to AEK Athens on 21 November 2006, at 40 years and 211 days.

He retired from football at 41 years leaving Milan fans a legacy of memories, including a goal on a penalty kick scored against Udinese in his last match played at San Siro.

One of the greatest AC Milan players ever, Andriy Shevchenko, is the second-highest scorer in AC Milan’s history with 175 goals over eight seasons, which rightly earns him a place among AC Milan legends.

Shevchenko knew how to score and he did it a lot at Milan. He is best known for his amazing finishing and deadly shoot. Shevchenko’s career has been highlighted by many awards, the most prestigious of which were the Ballon d’Or in 2004 and the champions league when he scored the decisive penalty against Juventus in 2003.