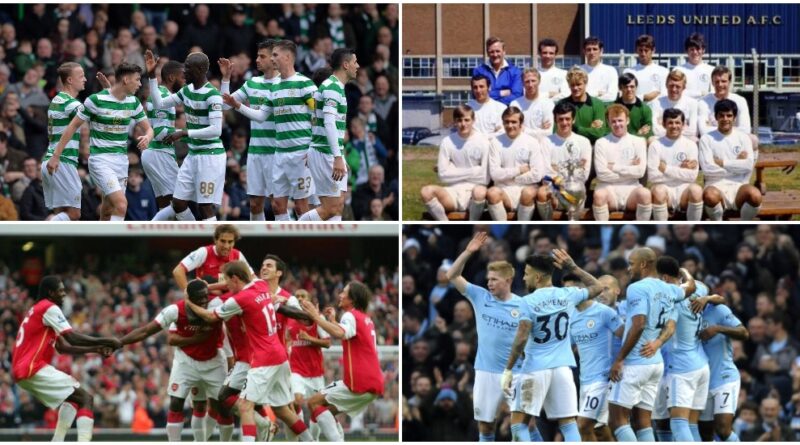 Consistency is rare but a very imperative trait in football. Winning a game or two is good but what about winning through a season-long campaign? That is pretty special indeed. The Golden Premier League trophy is awarded to the team who has been unbeaten throughout the English Premier League season and Arsenal being the only team to win it makes that 2003/04 campaign of theirs one of the best and longest unbeaten runs in British football.

Liverpool tried to get closer to the 49 games unbeaten record set by Arsenal but stumbled on their 44th game against Watford but the Merseyside club did write its name in the history books that season after going on a sensational run of form. Even in Scotland, we have seen some great unbeaten runs from Celtic and Rangers in the past. In this article, we will put together 10 longest unbeaten runs in British football.

Here are the 10 longest unbeaten runs in British football.

You must have anticipated that Man United would surely be on this list somewhere. Man United is probably the most successful club in the Premier League having the greatest number of PL titles (20). The Red Devils went on 29 games without a defeat in the 2010-11 campaign. Sir Alex Ferguson’s side was unbeaten for 5 consecutive games from the last season and 24 in the next one.

Wolverhampton Wanderers stopped them from becoming just the 5th team ever to go undefeated for 30 games in the Premier League. That was a shocking defeat from a bottom-placed team but they did go unbeaten for quite a long period and won the Premier League title that season.

Expectations were high from Pep Guardiola’s Manchester City that they would emulate The Invincibles but Liverpool had other ideas when they met City and annihilated them with a 4-3 scoreline in nerve recking game at Anfield. It was their first defeat after 30 unbeaten matches since Chelsea trounced them in the previous season.

Man City had an assembly of records in that season in which they tallied up the most points (100), they had the most away points (50), most wins (32), and most consecutive victories (18). That Guardiola’s side will surely go down in history as one of the best sides in the Premier League ever.

Leeds United returned to the Premier League after a 16-year long wait under Marcelo Bielsa and they are now finally back to where they actually belong. The Whites went unbeaten for 34 games under Don Revie during the years 1968-67. United’s first title came about 51 years ago in which they lost only two games and started their unbeaten run that continued the following season.

Leeds beat teams like Everton, Man United, Chelsea, Man City, Arsenal and Tottenham Hotspurs during their historic unbeaten run. The Peacocks with the likes of Johnny Giles, Billy Bremner and Jack Charlton in their team were almost undefeatable, finishing six points ahead of Liverpool.

Started and ended in the city of Manchester, Chelsea’s unbeaten run continued for 40 games after which they faced Sir Alex Ferguson’s Manchester United and got defeated by a 1 goal margin. The Blues were very imposing under Jose Mourinho in his very first season at Stamford Bridge and won the Premier League title.

Mourinho went unbeaten for his first 8 games in charge until he got defeated by Manchester City and after that defeat, the Blues again remained unbeaten for 29 games winning the league that season. This was the golden era for The Blues and that the Chelsea team is one of the most underrated and underappreciated teams of all time.

Nottingham Forest is the team that held the record for the longest unbeaten run in British football for the longest time until Arsenal overtook their record of 42 games unbeaten after 26 years. Those heroics of the Tricky Trees in the 70s are still considered a fairytale and we don’t find a story quite like that very often.

Forest’s 42 games unbeaten run was completed over two seasons with 26 of the matches won in the 1977-78 season in which they won the title and 16 in the 1978-79 season campaign. Manager Brian Clough had a tremendous role to play in creating a remarkable dynasty for the Reds, helping them promoting up to the first division and winning it the very next season with a splendid unbeaten run.

Huddersfield Town is the only lower league team in the entire list but their incredible run of being unbeaten for 43 games is substantial. Huddersfield broke Nottingham Forest’s 33 years old 42-match unbeaten record, just to end their own run by tasting a 2-0 defeat through the hands of Charlton Athletic in a top of the table League One clash.

Despite having such a prodigious record in the league that season they still stayed third, just a point behind second-placed Sheffield Wednesday and could not earn an automatic promotion from League One to the Championship. The Terriers showed great spirit and character during that period and had their name written in the history books.

The Gers went 44 games unbeaten during the 1992-93 season, won a domestic treble that season and nearly won the Champions League. Walter Smith’s side defeated the English Champions Leeds United in both home and Away legs to reach the semi-final equivalent of the inaugural season of Champions League.

It would be churlish to underappreciate that Celtic’s 69 games unbeaten run but Rangers’ unbeaten run was probably the better one of the two as that 44 games unbeaten run of The Bears included 10 ties against the top tier teams from all across Europe and the Sottish football at that time was far more competitive than it is now.

The team that came closest to winning the golden Premier League trophy after Arsenal is Liverpool. The Reds went unbeaten for a whooping 44 games and the fact that they drew only 4 of those 44 games is quite astonishing. After a long wait of 30 years, they won the Premier League title in a bewildering fashion but it is a shame they could not go on and remain unbeaten for the entire league campaign.

Jurgen Klopp’s side will surely go down as one of the greatest Premier League sides ever. The Reds were undefeated for 422 days. The Anfield side’s total of 97 points was the 3rd highest in the PL history. Their incredible run of being undefeated was shockingly ended by the relegation battling side Watford who defeated Liverpool with a 3-0 scoreline at Vicarage Road.

“The Invincibles” is what Wenger’s Arsenal of 2003-04 is called to this date. That Invincibles’ squad which counted Thierry Henry, Dennis Bergkamp, Patrick Viera, Ashley Cole, and Fredrick Ljungberg in its ranks went an entire season without losing a single game. Their incredible run stretched from 7 May 2003 to 24 October 2004, consisting of 49 games.

The Gunners were stopped just short of the half-century by their life-long rivals Manchester United in a controversial way. Ruud van Nistelrooy and Wayne Rooney scored in that 2-0 victory at Old Trafford and put a full stop to that marvelous run of Arsene Wenger’s boys. That match is more often referred to as the “Battle of the Buffet” or “Pizzagate”.

Arsenal have not lifted the Premier League title ever since. This legendary unbeaten run of the North Londoners will be reminisced for a long time and is surely not getting outwitted anytime soon by any English club. However, this is only the second of the longest unbeaten runs in British football. The first position is taken by the Bhoys of Scotland.

Celtic hold the record for the two of the longest unbeaten runs in British football. Breaking their own record of being unbeaten for 62 games in 1915-17, Celtic continued their unbeaten run for 69 games this time in the 2016-17 season. After surpassing the record, Celtic boss Brendan Rodgers said, “They’ve set a record that may well never be beaten and they can be very proud”.

They surely have set a milestone that is nearly impossible to achieve by any other club. Bhoys’ record undefeated run of 69 matches was ended in a remarkable style when they were beaten 4-0 by Hearts at Tynecastle.

Ranked : 50 Biggest Clubs In The UK