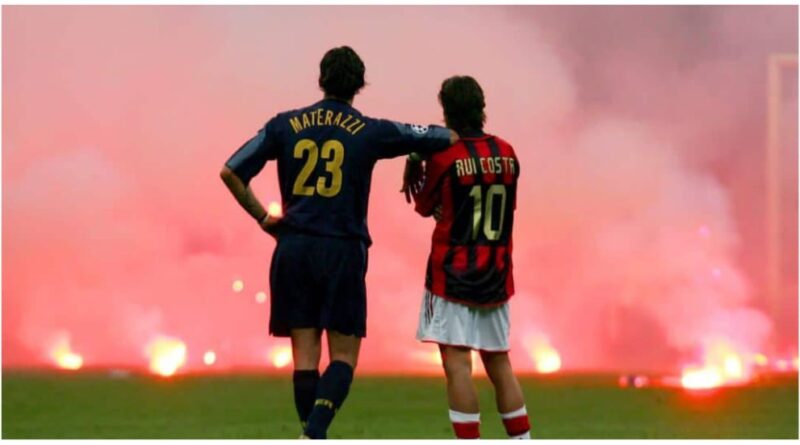 Every major footballing country in the world has some great local rivalries. Some of those rivalries run deeper than others. Italy is home to some of the fiercest football clubs in the world. In this article, let us have a look at some of the biggest rivalries in Italian football.

Here are the top 10 biggest rivalries in Italian football.

Situated at either end of the Apennines mountain range, the football rivalry between Bologna and Fiorentina is very heated. With both sides having enjoyed long runs in Serie A to mixed success and their proximity to one another has made it a popular clash between each side of supporters.

Not all of this has been positive though, as clashes in the 1988/89 season in a game in Florence saw a match abandoned as Bologna fans raided the stadium with Molotov cocktails, severely injuring several fans. This incited deep hatred between both sides that continues to boil over to the current day ensuring an intense affair when these sides clash in one of the big Serie A derbies.

Juventus and Napoli are two of the biggest clubs in Italian football and the meeting between them are one of Italian football’s classic rivalries. On the field, it has pitted some of Serie A’s finest players against each other; the goal-scoring genius of Juve’s Roberto Bettega and Napoli’s José Altafini and also the flair of Michel Platini and Diego Maradona. Both teams have storied histories and both have laid claim to glorious eras, albeit Juve’s being far greater in frequency.

The Northern/Southern divide in Italy has always been existent. Some Northern Italians overlook the South, wishing to undo the Risorgimento in 1861. To differentiate between the North and the South think of this: Industry vs. Underdevelopment.

Much of the enmity between the clubs are rooted in social and sporting history, and in truth runs deeper one way than the other. The South of Italy was very poor. Turin, an industrial hub and the seat of Italy’s royal family stood in sharp contrast to Naples, a sprawling and chaotic city at the foot of Mount Vesuvius.

Each time Juventus and Napoli meet, these regional identities are accentuated, laying bare profound divisions. And this deep-rooted territorial rivalry is often manifested, making it one of the biggest rivalries in Italian football.

The Derby Della Scala between Chievo and Hellas Verona is one of Serie A’s youngest rivalries. The derby is relatively new with both sides only meeting for the first time in 1994 but the rise of both sides into regular Serie A participants has made this a clash worth watching.

In the 2001–02 season, both Hellas and Chievo were playing in Serie A. The first-ever derby of Verona in Serie A took place on 18 November 2001, while both teams were ranked among the top four. The match was won by Hellas, 3–2. Chievo got revenge in the return match in spring 2002, winning 2–1.

Both sides are often found close to one another in the table meaning that more than bragging rights are on the line. A great battle that is always guaranteed to generate some tense action.

The Derby Della Lanterna, played between U.C. Sampdoria and Genoa is one of the most intense matches in Italian football. No matter how badly the Genoese teams are doing, their fans put on a display that is equal to the Derby Della Madonnina or the Derby Della Capitale.

The buzz in the city before the game ensnares anyone and everyone in the city of Genoa. Derby only being 70+ years old, has evolved into one of the most enigmatic in Serie A, and could soon become as important as its Roman and Milanese counterparts.

The rivalry has evolved since Sampdoria burst onto the scene in 1946. Back then, Genoa were considered the big club, having won 9 league titles, finishing runners-up eight times and winning a Coppa Italia in the bargain. This didn’t seem to faze Sampdoria at all, with the new men in town winning the first-ever Derby 3-0 in front of 45,000 fans.

The Derby Della Mole is the local derby, played out between Turin’s most prominent football clubs Juventus and Torino. It is named after the Mole Antonelliana, a major landmark in the city and the architectural symbol of the Piedmontese capital.

A lot of unfortunate incidents have taken place between these two clubs. In 1967 after a derby which Torino won 4–0, incensed Juventus fans vandalized the grave of former Torino player Gigi Meroni.

Prior to a derby match during the 2007–08 season, riots took place and chaos broke out as police tried to control the hooligans involved. There were 40 arrests made and 2 injured policemen. Rubbish bins were set on fire and many cars and shops were vandalized as a result. It is definitely, one of the biggest rivalries in Italian football.

The derby between Calcio Catania and U.S. Città di Palermo is called ”The Derby di Sicilia”. One of the Italian football derbies known for fierce hatred, the action between Sicilian sides Palermo and Catania is always on a knife edge. This is a clash that spans every inch of the island and is known for poor fan behaviour, making it one of the most dangerous derbies in the world.

On the streets of Palermo, the Sicilian capital, you can often find a slogan spray-painted on the walls, it reads “Forza Etna”. Forza meaning “go” and Etna being the Volcano which leers ominously over the city of Catania, their most hated of rivals. It’s a visceral message from the Palermo ultra’s urging the island’s famous volcano to erupt once more and engulf Calcio Catania. Such is the hatred between the clubs.

The Derby del Sole or The Derby of the Sun, played between S.S.C. Napoli and A.S. Roma is among the biggest rivalries in Italian football. The two clubs are considered the most followed and successful outside of Northern Italy; Roma being from Central Italy and Napoli from Southern Italy.

The south of Italy has always had a strained relationship with the rest of the country. The south are angered by what they see as this aristocratic arrogance from those who look down upon them. It is not surprising therefore that this should carry itself on to the football field when teams from each side of the divide meet.

Geography also plays a part in the derby as the clubs are relatively close in proximity with Rome lying just over 100 miles north of Naples in Central Italy.

The Derby Della Madonnina or the Milan Derby played between the two prominent Milanese clubs Internazionale and AC Milan. This is one of the biggest games in Italian football.

Milan were founded in 1899 as Milan Cricket and Football Club. There was a strong English driving force behind the team and half a dozen of the association’s original members were English. For a while, things were all good, with Milan picking up the title in 1901, 1906 and 1907.

The rivalry began in 1908 when issues over the signing of foreign players led to a split of Milan and the foundation of Football Club Internazionale. This gave birth to one of the biggest rivalries in Italian football.

The Derby d’Italia is the name given to the match between Internazionale and Juventus. The Derby d’Italia, as the fixture was dubbed in 1967 by the famous Italian sports journalist Gianni Brera, is one of the most intense matches in world football. With a fierce rivalry that is so deeply rooted in each club’s history.

The rivalry between these clubs started in 1961, when second-placed Inter travelled to Turin to take on leaders Juventus. However, due to extreme crowding, the match was abandoned with Juventus fans storming the pitch, 30 mins into the game. According to the rules of that time, Inter were awarded a 2-0 win, just as Juventus had been in similar circumstances a few seasons previously.

However, Juventus were not happy with this decision and took this to the Italian football governing body, the FIGC. On the last day of the season, FIGC ruled that the Inter’s win wouldn’t stand and the game would have to be replayed. FIGC’s head at that time was Umberto Agnelli, who was also Juventus’ president, and Napoli’s president accused the FIGC board of favouritism.

Napoli, in protest of this decision, fielded a youth team in the replay, eventually losing 9-1 to Juventus. And thus a rivalry was born. The rivalry was refuelled during the Calciopoli scandal in 2006 when Juventus were stripped of their league title in 2006 and it was given to Inter.

The Derby Della Capitale is considered to be the fiercest intra-city derby in the country ahead of the other major local derbies. It is also known as the Derby Capitolino and Derby del Cupolone, as well as The Rome Derby in English and Derby di Roma in Italian.

Lazio was founded in 1900, while AS Roma was founded much later in 1927. It was during the formation of the latter that the hatred in Rome begin. Benito Mussolini tried to create a unified Roman club to challenge the dominance of Northern clubs, and thus three clubs were merged to become AS Roma in 1927. Lazio, however, refused to join this merger, thus a kind of rivalry emerged from the very early years of the coexistence in the same city.

In a nutshell, the Lazio fans are considered by their Roma counterparts as being outsiders i.e. not from the city of Rome.  Lazio fans retort by informing the Roma Tifosi that they were here first. The year 1900 to be precise. Twenty-seven years before Roma became a club.

Checkout: Greatest Serie A Players Ever