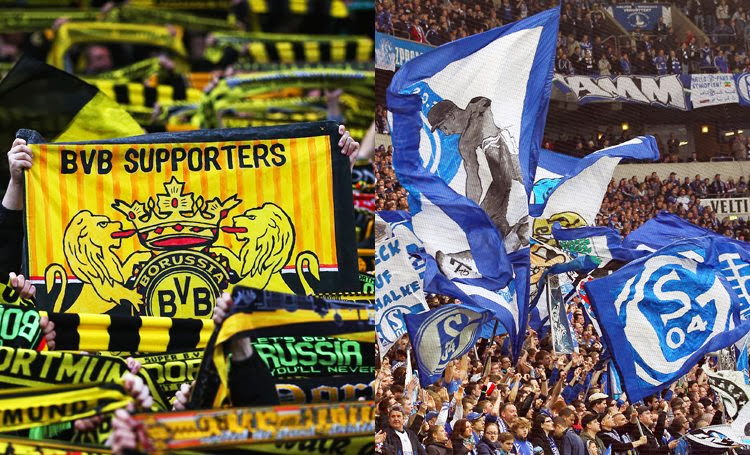 Football is adored worldwide because it is much more than just a sporting event. Behind that sheer spectacle are wider cultural, regional, political and historic implications that make certain matches, teams and players revered above many others.

Such tangible elements give rise to clashes whose significance permeates that of the regular season fixture and whose very outcome defines the game as a whole for many die-hard supporters around the globe. Let us have a look at some of the biggest rivalries in German football.

The rivalry between HSV and St. Pauli is a big one. The two clubs have rarely played in the same league but the animosity between the two sets of fans is no less intense than that of other major European city derbies. It’s the sort of game that is regularly preceded by HSV fans routinely greeting their counterparts with a barrage of bottles, or vice versa.

A lot of the conflict between Frankfurt and Offenbach goes back to 1963, when the Bundesliga was formed. The problem arose when 46 teams applied for admission to a 16-team league. From the 5 regional leagues, sides were selected based on economic criteria, on field success and overall representation from the different regions.

The complex selection process put Kickers Offenbach at a disadvantage despite performing better than Eintracht since the regional league’s inception in 1945. Offenbach and their supporters felt hard done by and many Offenbach supporters to be a primary reason for the club’s decline afterwards.

Gladbach and Dortmund are neither regional rivals nor direct competitors, in the sense that these days, Dortmund are aiming for perennial trophies while Gladbach are trying to get a foothold in European competition. But the Borussen derby remains a notable feature of the Bundesliga season. It is a match with just that little bit extra at stake if only for the name of Borussia itself. It is one of the present biggest rivalries in German football.

Hannover 96 against Eintracht Braunschweig is not just a football game. Because the Niedersachsen derby is far more than a neighbourhood competition, the two cities united only one thing: a centuries-old rivalry and a profound aversion in the fan camps of both clubs.

FC Nürnberg has been Bayern’s main and traditional rival in Bavaria. Philipp Lahm once said that playing Nuremberg is always special and is a heated derby. Both clubs played in the same league in the mid-1920s, but in the 1920s and 1930s, Nürnberg was far more successful, winning five championships in the 1920s, making the club Germany’s record champion.

Bayern took over the title more than sixty years later, when they won their tenth championship in 1987, thereby surpassing the number of championships won by Nürnberg. It remains one of the biggest rivalries in German football.