Aston Villa is one of the biggest and most followed football clubs in England. Over the years, many great players have played for the club. They have contributed massively to the legacy of the club. Having already covered Villa’s greatest players, greatest strikers, and greatest XI, we will now look at the greatest Aston Villa defenders of all time.

Based on the impact on the club, consistency, loyalty, dedication and success, here are the 10 greatest Aston Villa defenders of all time.

John Gidman joined Aston Villa from the Liverpool youth team in 1971 and turned professional a year later. He was a classy full-back known for his overlapping runs down the right flank.

Gidman spent eight seasons with Villa and helped them to the FA Youth Cup, promotion from the Second Division and the League Cup. He also won his sole England cap during his time with the Villans. He is regarded as one of the greatest Aston Villa defenders of all time.

Steve Staunton signed for Aston Villa from Liverpool in August 1991 for £1.1 million. The Irishman came with a good pedigree having won the F.A. Cup and League title with the Reds.

Staunton became a firm fixture in the Villa starting line-up under new manager Ron Atkinson. He became a part of a much improved Villa side that finished 17th in the previous season. He won two League Cups and one UEFA Intertoto Cup with Aston Villa, over his two spells.

Mellberg joined Aston Villa from Racing Santander in 2001 and spent the next seven seasons with the club. He was a solid, dependable, and hard-tackling centre-back. Although he was not very fast, he was strong, had an excellent positional sense, and was also a good header of the ball, which made him a goal threat on set-pieces.

For a centre half, Mellberg was a pretty good right-back as well. The Scandinavian never complained when he was asked to play as a right-back and delivered the same blood and thunder performance whichever position he played.  He was a part of the team that won the UEFA Intertoto Cup in 2001. 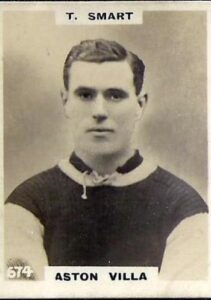 Tommy Smart Aston Villa from Halesowen Town in January 1920. He went on to win the FA Cup that year. He soon established himself in Villa’s first team, which earned him a place in the England team against Scotland in 1921.

Tommy Smart became a brilliant defender who won five England caps. His partnership with Tommy Mort won admiration far beyond Villa Park. He along with Mort, was part of a defensive tandem known for Villa as “Death and Glory.”

The oldest player on this list, Howard Spencer was referred to as the “Prince of Fullbacks” due to his sportsmanship and ability. As a full-back, he was the embodiment of coolness, stern defence without rigidness, and his anticipation was top-notch. Where Spencer went the ball followed.

During his time with Villa, he helped the side to four First Division championships and three FA Cup victories, as well as becoming the first Aston Villa player to captain England. He is one of the greatest Aston Villa defenders of all time.