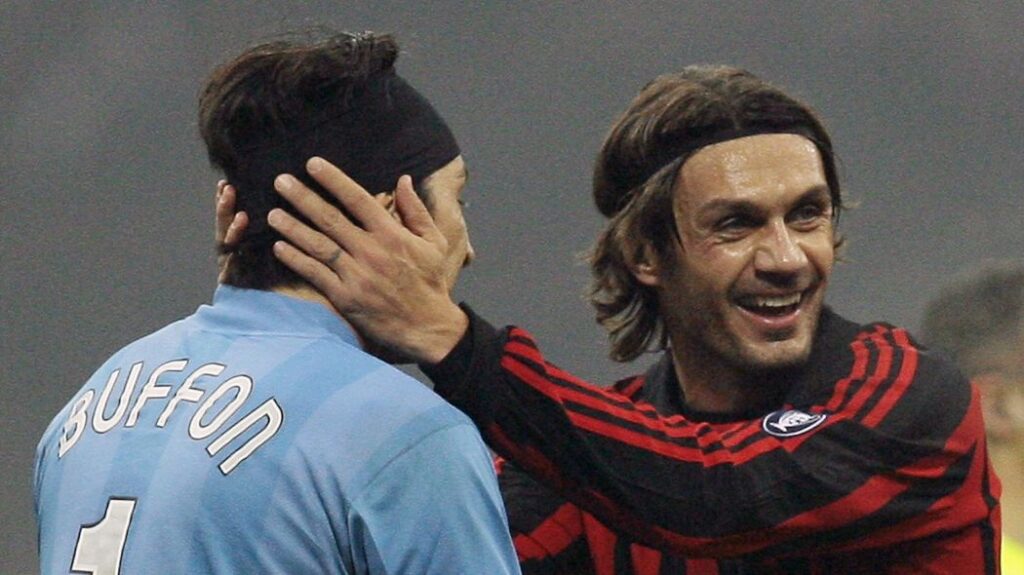 Ballon D’Or is the most prestigious Individual honour for a footballer. It is for footballers, what an Oscar is for Actors. But just as some deserving actors never won an Oscar, there are some great footballers who never laid their hands on Ballon D’Or. Here we look at some deserving players who didn’t win the Ballon d’Or.

Age seems to hold no precedence over Gigi Buffon given the state of his playing career, now at 40, the legendary Italian continues to announce himself as among the world’s best keepers, commandeering his goalpost with authority and skill.

However, like every player on this list, he couldn’t lift the Ballon d’Or even once in his illustrious career, coming close with a second place finish at the 2006 ceremony.

In 1996, a 21-year-old Alessandro Del Piero pulled all the strings and scored six goals as Juventus won the UEFA Champions League, but Europe’s journalists awarded the Ballon d’Or to German Matthias Sammer, with Del Piero not even in the top three. In 1998, Del Piero was Italian Footballer of the Year but lost out on the Ballon d’Or to Juventus teammate Zinedine Zidane (who had just won the World Cup with France).

Alessandro Del Piero’s ability on the ball won admirers all over the world during his time at Juventus, and as he was equally adept at setting up goals as scoring them; he often played behind a main striker. The former Italy international was also an expert from dead-ball situations, and his trademark was cutting in from the left flank and curling the ball into the far corner.

He won virtually every trophy available to him at club level while playing for the Old Lady, as well as the World Cup in 2006, but he has never come close to winning the Ballon d’Or.

Bobby Moore is up there with the greatest defenders of all time, with perhaps only Franz Beckenbauer being ahead of him. A member of the World Team of the Twentieth Century and the FIFA World Cup All-Time Team, Pele described Moore as the greatest defender he ever faced. Moore played most of his club football with West Ham and Fulham before a brief stint in the U.S., and won 108 caps for England, captaining them to a World Cup win in 1966. While England teammate Bobby Charlton won the Ballon d’Or in 1966, Moore had to wait until 1970 to make the top three, when he finished second to Gerd Muller.

Widely regarded as the greatest Liverpool player of all-time, Kenny Dalglish narrowly beat Steven Gerrard to the title in a 2006 supporters poll entitled ‘Players Who Shook The Kop’. Dalglish played for only two clubs during his career, Celtic and Liverpool, and scored 336 goals in 822 games in total. He is Scotland’s most capped player of all-time, with 102 appearances, and their joint top scorer with 30 goals. Dalglish came second in the 1983 Ballon d’Or, but Michel Platini ultimately won the accolade comfortably.

Henry has achieved god-like status among Arsenal fans for his goal-scoring prowess and technical ability and the French striker is currently the club’s all-time leading goal-scorer.The striker was also a part of the Invincibles, the Arsenal team that went unbeaten for an entire season in the Premier League.

Henry has enjoyed significant success at a domestic level, most notably winning a historic treble with FC Barcelona including the La Liga title, the Copa Del Rey, and the Champions League in 2009. The striker has also done well with the French national team, winning the 1998 World Cup and UEFA Euro 2000, while also surpassing Michel Platini to become France’s top scorer.

Henry came agonizingly close to winning the Ballon d’Or on two instances, coming third in 2006 and finishing as runner-up in 2003.

Jimmy Greaves’ natural goalscoring talent saw him break both club and country records during a career which made him the best striker of his generation and one of the best of all time. Greaves scored a staggering 422 goals in 602 club appearances. He finished as the First Division’s top scorer in six seasons. He spent majority of his career at Tottenham Hotspur ,where he scored 266 goals in 379 games. Whilst with Spurs he won the FA Cup in 1961–62 and 1966–67, the Charity Shield in 1962 and 1967, and the European Cup Winners’ Cup in 1962–63.

Greaves also remains the all time top scorer in English First Division history and was a part of the victorious England side of 1966. He was close to winning the award in 1963, when he finished 3rd.

Voted Celtic’s greatest player in a 2002 poll, Jimmy Johnstone was a player like few others in football have ever been. He had the ability to ease past the defenders,leaving them petrified.

Johnstone was one of the “Lisbon Lions”, the team that won the then European Cup for Celtic in 1967. In an early round tie against Nantes, Johnstone’s trickery on the wing saw him dubbed “The Flying Flea” by the French press, whilst his performances over the course of the season saw him finish third in the European Footballer of the Year award. However, he should have won the award that year, but even without it , there’s no denying the greatness of this Celtic legend.

He’s not quite retired yet, but when Xavi was in his prime, around 2008 to 2012, he was the most important player on the best club team in the world—maybe even the best club team in history. Xavi’s passing and awareness set the tempo for Pep Guardiola’s Barcelona team in a way that anyone who watched during that time will never be able to forget.

Xavi was an absolute metronome on the pitch, his passes, and intelligence dictated the midfield and kept it ticking over smoothly. Another payer sadly overlooked for this award, and on the wrong side of the winners’ list, the closest Xavi came to a Ballon d’Or, was third place on no less than three occasions. Another day, another legend who didn’t make the cut.

Regardless, with or without the prize, nobody can question Xavi’s worth to the game.

Having graduated from the famed La Masia academy, Iniesta has won all the collective trophies there is to win; the FIFA World Cup, two Euro Cups, four UEFA Champions League crowns and eight La Liga titles amongst others. On an individual note, Iniesta was voted into the FIFA FIFPro World XI for 9 successive years and has been voted into the Uefa Team of the year for 8 continuous years amongst several others.

The 32-year-old is a fierce competitor as well, and one of the very best big game players of his generation. The midfielder has scored vital goals for club and country, notably in the 2009 Champions League semi-final against Chelsea and the winning strike in the 2010 World Cup final. Arguably, his most established achievement was the Golden Foot he picked up in 2014, but the Ballon d’Or always eluded him, albeit he came close in 2010, when he finished runner-up.

As the finest defender of his generation, it’s hard to believe Paolo Maldini was never honored, and never more so than in 1994. In a dreamy year in which Maldini’s already legendary composure and timing made him the world’s standout defender, he won pretty much everything except the Ballon d’Or: Serie A, Supercoppa Italiana, the UEFA Champions League (in a memorable final where Milan destroyed Barcelona 4-0), and the UEFA Super Cup. He was runner-up in the World Cup with Squadra Azzurra, and was honored as the best player in the world by World Soccer magazine, but the Ballon d’Or went to Barcelona’s Bulgarian striker Hristo Stoichkov.

Three-time Ballon d’Or winner Ronaldo named him as the toughest opponent he faced during his own playing career, and the defender retired at the age of 40 in 2009, with Milan retiring the number three shirt in his honour.

Even after all that , he was never able to lay his hand on the prestigious award. The reason was that before 1995, the award could only be given to European footballers. It was essentially the European Footballer of the Year award.

Garrincha, too never won the award because of the same rule. The Charlie Chaplin of football. Arguably the greatest (along with Pele) to grace the green. No footballer in the history of the game has given so much joy to his viewers than this stunted man with uneven legs. The greatest dribbler the world has ever seen. In the absence of the inimitable Pele, it was this man who led Brazil to glory in 1962. A nightmare for any defender on any given day, if right wing was heaven, this man was god.

It is quite remarkable to think that Ferenc Puskas never won the Ballon d’Or. Key to both the legendary Real Madrid and Hungary teams of the 1950s, Puskas is comfortably one of the greatest players of all time, FIFA have even honored him by creating the ‘FIFA Puskas Award’, awarded annually to the scorer of the best goal in the world that calendar year.

Puskas scored 616 goals in 620 games at club level and 84 goals in 85 games for Hungary. He won a total of 18 trophies for club and country, including 10 league titles, three European Cups and one Olympic Gold. Despite being named European Player of the Century by L’Equipe magazine, Puskas never won the Ballon d’or, coming closest in 1960, when he lost out to Barcelona’s Luis Suarez.

Maradona played in Europe during his prime, most famously in Napoli, where he seduced the fans’ senses with his direct dribbling and quick thinking, becoming an unstoppable force that carried Napoli to two Italian titles and one Uefa Cup.

Despite European journalists witnessing Maradona’s magic, El Diego was ineligible as the award was given exclusively to players of European origin. And so Michel Platini, Igor Belanov, Marco van Basten, and Ruud Gullit won the trophy in the years that Maradona was easily the best player in the world.

France Football reckons that Pele would have won the Ballon d’Or award SEVEN times between 1958 and 1970, if it wasn’t for the ‘Only European Origin’ rule. Its hardly surprising given the fact that he is widely regarded as one of the greatest ever to have played the game if not the greatest.