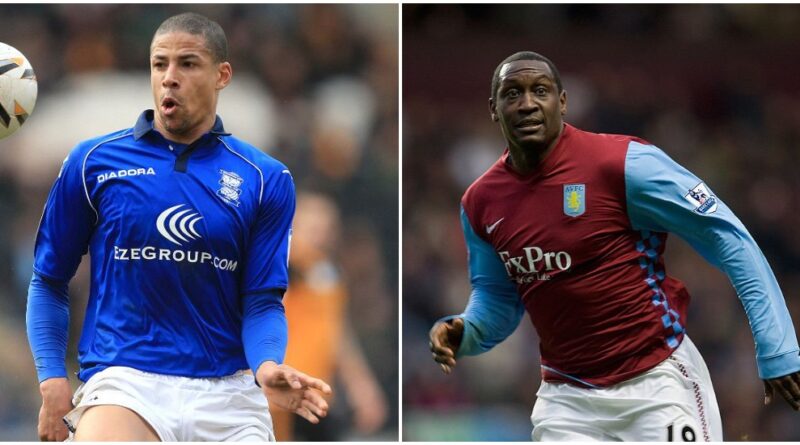 Here’s a look back at the small number of players who have played for both Aston Villa and Birmingham City.

Heskey joined Blues from Liverpool in 2004 and enjoyed a successful first campaign at St Andrew’s. The striker notched a respectable ten league goals in 34 appearances for Birmingham and was voted the Players’ Player of the Year for the 2004/05 season.

Yet, the following campaign proved to be less fruitful as he only managed four Premier League goals, as the Blues were relegated to the Championship. Heskey was sold to Wigan in that summer, and after two-and-a-half years in the northwest, he returned to the midlands, this time with Villa.

The then-England international scored on his debut for Villa but only registered a single strike in his final 13 games of the season. The rest of his Villa career produced a similar strike rate as he scored just 11 times in 96 appearances over the next three years. In 2012, the former Liverpool man turned his back on Premier League life and opted for the much more tranquil surroundings of Australia.

Davies moved to Villa from West Brom in 2007, and after a season on loan at Villa Park, the defender made his switch permanent the following year. Davies formed a solid partnership with Martin Laursen that season, which saw Villa come so close to finishing in top four.

Yet, in the 2009/10 campaign injuries restricted him to just two league appearances. As a result, Martin O’Neill signed James Collins and Richard Dunne, whom Davies failed to oust from the team.

After a short loan at Leicester, the defender was sold to Birmingham in January 2011. Injuries once again restricted him at St Andrew’s and he only played six league games in the Blues relegation campaign. The centre-back then enjoyed two superb seasons in the Championship, and only missed one league game in that time.

Gardner came through the Villa youth ranks and made his debut for the club in 2005. He played eight times in his maiden season and was used mainly as a bit-part player in Martin O’Neill’s side over the next few years. The Northern Irishman appeared to like Gardner’s versatility and often deployed the youngster in numerous positions.

However, injuries stunted his potential at Villa and in January 2009, having played just one game so far that season, Gardner joined Birmingham.

The Solihull-born player instantly established himself in Alex McLeish’s side. In his second year at St. Andrews Gardner was the club’s top goal scorer and helped the side win the League Cup. Despite the team’s success, the Blues were relegated in 2011 and Gardner left his boyhood club that summer.

Liam Ridgewell came through the Villa youth system. He made 93 appearances for the club. In the 2005/06 season (his third at senior level) he had forced his way into David O’Leary’s side and played 32 league games whilst registering five goals.

However, Martin O’Neill’s reign at the club proved to be less rewarding for Ridgewell. After just one season under the Northern Irishman’s tutelage, the centre-back moved to Birmingham and became the first man to transfer directly between the clubs since 1984.

Ridgewell was a first-team regular during a four-and-a-half year spell at St Andrew’s, including the 2009/10 season, which saw Blues finish 9th in the Premier League. Ridgewell also played 90 minutes in the League Cup triumph against Arsenal in 2011, yet was relegated twice with the club.