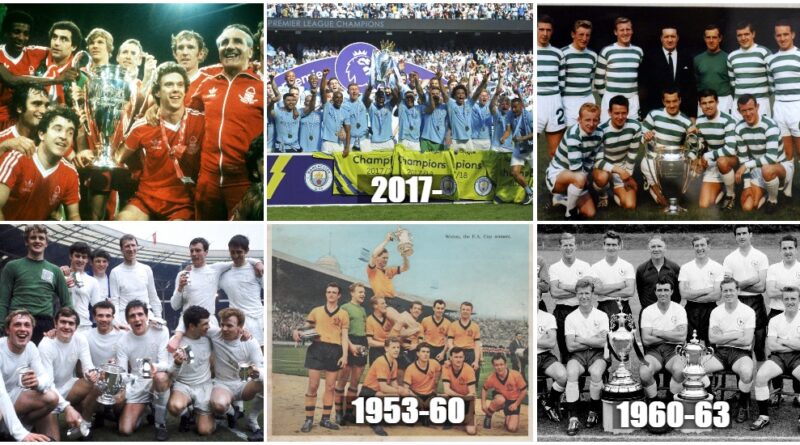 The English Football League started in 1888 and is the oldest such competition in the world. Ever since many great football teams have taken the competition by storm. Over the years, we have seen some teams which are beyond perfection. In this article, we will have a look at the 20 greatest British football club sides of all time.

Here are the 20 greatest British football club sides of all time.

Claudio Ranieri produced a near-perfect team that achieved immortality in arguably the world’s strongest league. How else could they have managed to topple England’s illustrious elite just 12 months after barely surviving the drop? Leicester had their outstanding stars – Jamie Vardy had a direct hand in 36 goals, Riyad Mahrez 29, while N’Golo Kanté proved a revelation in midfield. But their real strength was the collective bond which helped them eke out big results when the pressure was at its most intense.

With the team in the second division, Manchester City appointed the management team of Joe Mercer and Malcolm Allison. In the first season under Mercer, City won the Second Division title and made important signings in Mike Summerbee and Colin Bell. Two seasons later, in 1967–68, Manchester City claimed the League Championship. The club also won the league cup. FA Cup and European Cup Winners’ Cup in that time period as well.

During the early 1900s Newcastle started to purchase talented players, especially from Scotland, and soon had a star-studded squad capable of beating anybody in England. In 1904-05, Newcastle won their first Division One title. Two years later, they were champions again, and in 1908-09 they were once again the best team in the country. They also reached the FA Cup final – in 1905, 1906 and 1908, although finished as runners-up on each occasion. However, in 1910 United lifted the trophy for the first time.

Huddersfield Town were crowned champions in 1923/24, 1924/25 and 1925/26 – the final triumph being the most decisive, with Town finishing five points clear of Arsenal. Chapman, who was the manager for the first two Town title wins, went on to create a side at Arsenal which eventually matched Town’s hat trick of championships. This Huddersfield team was one of the greatest British football club sides of all time.

The 1950s were by far the most successful period in the club’s history. Captained by Billy Wright, Wolves finally claimed the league championship for the first time in 1953–54, overhauling local rivals West Bromwich Albion late in the season. Stan Cullis’s uncompromising and direct team powered their way to two more league titles and one FA Cup.