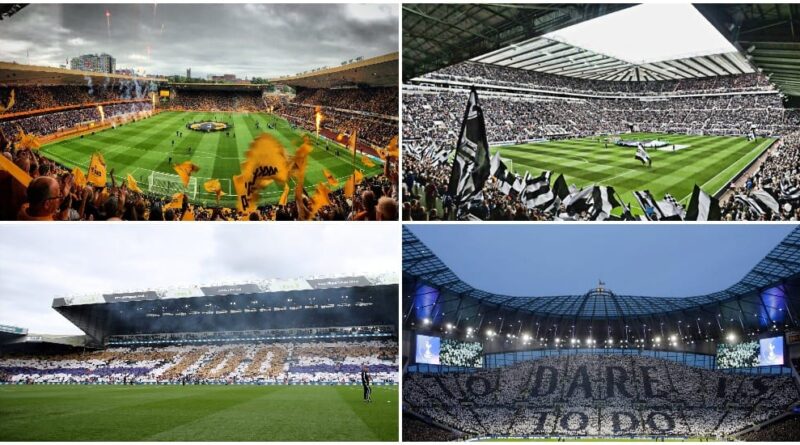 Here are the Premier League stadiums ranked by their capacity, starting from the stadium with the lowest capacity.

Brentford Community Stadium is a newly opened stadium, that has a capacity of just above 17k. The ground has four distinct stands – South, North, West, and East. It is suitable for use for both association football and rugby union matches.

Burnley’s Turf Moor has the second-lowest capacity in the Premier League. It is the second-longest continuously used ground in English professional football with an official capacity of 21,944. The ground also has a significant number of seats for the away fans.

Situated in Whitehorse Lane, London, Selhurst Park is the home of Crystal Palace. The stadium is renowned for its atmosphere. The home support Crystal Palace gets is quite astounding. Selhurst Park has had several renovations since its construction, and 1995 saw the completion of the two-tiered Holmesdale Road Stand.

Carrow Road was built in just 82 days during the summer of 1935. The stadium has been altered and upgraded several times during its history, notably following a fire that destroyed the old City Stand in 1984. Having once accommodated standing supporters, the ground has been all-seater since 1992. The ground’s current capacity is just above 27k.

Also known as the AMEX Stadium, the Falmer stadium is known for its good facilities such as stewarding, food, police, etc. and has also got a good view. The support for Brighton & Hove Albion has also grown in recent years as the club management emphasizes on keep improving the matchday experience for the fans.

One of the oldest stadiums in English football history, Molineux always has an exhilarating atmosphere. The stunning yellow color-based stadium has been renovated quite a few times in its lifetime and now its beauty is second to none and has also got good facilities and a decent location. The home of Wolverhampton Wanderers, Molineux’s capacity is just above 32k.

It is one of the most recently built stadiums in the Premier League. The stadium and the fans there provided a great hand in that iconic and remarkable 2016 Premier League-winning campaign for Leicester City. The loud chants from the stands kept intimidating every away team to visit the Foxes’ home ground.