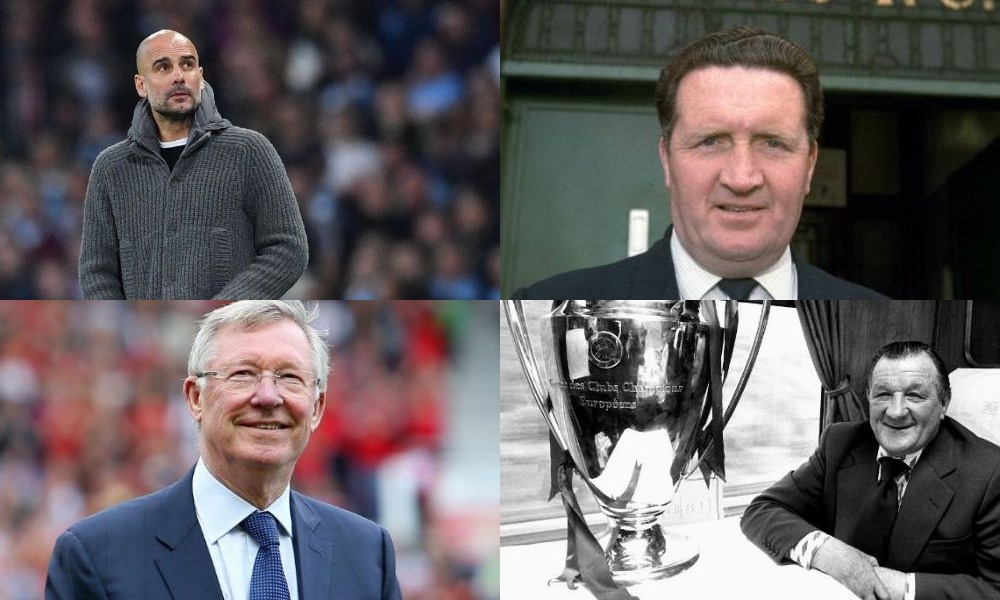 A manager is the soul of a football team. A great manager can make a big difference in a team with his techniques, innovations, training methods, motivations and strategic changes. He can change the fortunes of a struggling team, or take an ordinary team to greater heights. There have been many great managers in football over the years. In this article, let us have a look at some of the best football managers of all time.

Here are the 15 best football managers of all time –

Matt Busby joined Manchester United in 1945 and led his team to FA Cup and League title. The ageing stars were then replaced by the best young players in the country, a team the media dubbed “The Busby Babes.” The players, including Bobby Charlton and Duncan Edwards, showed great potential.

However, tragedy struck and most of the team members were killed in an air accident. Following the tragedy of the Munich air disaster, Busby rebuilt the side. Ten years later and Busby had built another great team, including Charlton again. He also added the flair and skill of George Best and Denis Law. This team won the ’68 European Cup, the trophy Busby had been chasing when the Munich disaster struck.

Across 25 years at Old Trafford, he won 13 trophies. All in all, Busby won five league titles, five Charity Shields, two FA Cups, and a European Cup.

Jose Mourinho is one of the most reputed managers in the world. It was an unlikely Champions League victory with FC Porto when Mourinho first burst onto the stage.

In 19 seasons of club management, Mourinho has led his club to win its domestic league eight times, the UEFA Champions League twice and the UEFA Cup/Europa League twice. Between 2003 and 2012, Mourinho did not go a single calendar year without winning at least one trophy.

The 54-year-old has won a superb 25 trophies across spells with Porto, Chelsea, Inter Milan, Real Madrid and Manchester United.

Charismatic, outspoken and often controversial, Clough is considered one of the best football managers of all time. His achievements with Derby and Forest, two struggling provincial clubs with little prior history of success, are rated amongst the greatest in football history.

His teams were also noted for playing attractive football and for their good sportsmanship. Despite applying several times and being a popular choice for the job, he was never appointed England manager and has been dubbed the “greatest manager England never had”.

Vicente del Bosque is one of the best football managers of all time. This man is no stranger to silverware. The 66-year-old managed Real Madrid across three different spells and commanded their famous ‘Galacticos’ side to the Champions League title in both 2000 and 2002.

Del Bosque is regarded as one of the greatest and most successful managers of all time. He is to date the only football manager to have won the Champions League, the European Cup, the World Cup, and the Intercontinental Cup. In January 2017, del Bosque was named among the 10 greatest coaches since the foundation of UEFA in 1954.

Carlo Ancelotti is regarded as one of the best football managers of all time as he is one of the only three managers to have won the UEFA Champions League three times (twice with A.C. Milan and once with Real Madrid). He is also one of the seven men to win the Champions League or the European League as a player and a manager.

Madrid were simply desperate to win their 10th Champions League title, a trophy they hadn’t won for 12 years. Ancelotti would deliver them that trophy in spectacular style, thumping Bayern Munich 5-0 on aggregate in the semi-finals and then overpowering their city rivals Atletico in extra time in the final.

Helenio Herrera is one of the best, most important, influential, and successful managers in football history. He pioneered the use of psychological motivating skills to ensure that all his players believed they were going to win.

It worked wonders for him and he picked up 16 major trophies in his time as a manager. With Atletico Madrid he won two league titles, adding another two to that tally with Barcelona later on. He also won two UEFA Cups with Barcelona and a Spanish Cup.

His most successful spell came with Inter Milan, where he won three league titles and two European Cups. He added an Italian Cup with AS Roma later on.