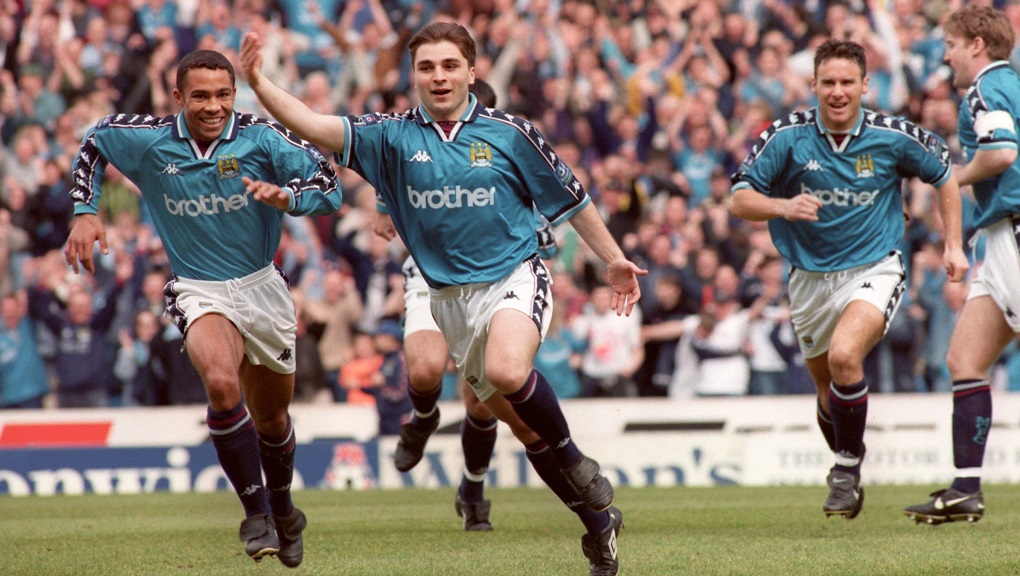 Midfielders are generally the most hard-working players on the pitch.From helping out defenders in dispossessing opponents to assisting attackers in scoring goals,they do it all. Many such great midfielders have played for Manchester City throughout their history and we have tried to pick ”10 greatest Manchester City midfielders of all time”.

Here are the top 10 greatest Manchester City midfielders of all time ,we have left out some of the wingers who also played as outside right or outside left.

A brilliant utility player and former captain during his City career,Lake was a Manchester lad, and City through and through. Some City fans have called him our Duncan Edwards, in that he was a prodigiously talented youngster who never got to fulfil his natural talent. If it wasn’t for his injuries,he could have gone to achieve huge success. Equally comfortable in defence or midfield, he had the world at his feet on his day.

Lake signed a youth contract with City in 1983 after being spotted by scout Ken Barnes,turning senior in 1986.He burst onto the scene at Maine Road in 1987, and his promise earned him selection for England’s Under 21 side and a call-up to Bobby Robson’s 30-man preliminary squad for the World Cup in 1990.

But Lake’s career was rocked by a ruptured cruciate ligament injury he suffered in September 1990 during a match against Aston Villa. That injury eventually forced Lake to retire in 1996 after just 110 league appearances for the club.

Asa Hartford was a dynamic, tough-tackling and accomplished midfielder who spent 8 seasons with Manchester City over two spells.He started his career with West Brom and his performances attracted interest from the top clubs.However in November 1971 a high-profile transfer to Leeds United was cancelled when a suspected hole in-the-heart condition was found during a medical examination. In spite of this Hartford was signed from Albion by City manager Tony Book for £210, 000 in August 1974.

He helped City to win the League Cup in 1976 and made over 320 appearances for the club over the course of his both spells.

Neil joined Manchester City from Brighton in 1983 for £35,000 and was arguably City’s best player of the eighties, being voted Player of the Year in 1986/87 and 1988/89. A skilful and very competitive midfield player, Neil inspired a young team to promotion from the Second Division in 1989.

McNab scored sixteen goals in 221 league appearances and will be remembered as the man who scored the first goal in the 10-1 hammering of Huddersfield Town in November 1987. He left City in 1990 for Tranmere Rovers but returned to the club in 1994 as the Youth team Coach.

He is in his third season with Manchester City after being purchased from Wolfsburg in 2015. Manchester City’s manager Pep Guardiola was highly impressed by the Belgian last season and said “I think he is a special, outstanding player. He makes everything. Without the ball he is the first fighter, and with the ball he is clear – he sees absolutely everything.”

If De Bruyne can keep performing consistently and dedicate few more years to the service of this club,there’s no reason why he can’t make it to the top 5 of this list.

Wright-Phillips was signed as a youth player from Nottingham Forest when he was 17.He became the first graduate of City’s academy to break into the first team. Despite his diminutive size, Wright-Phillips was blessed with great pace and dribbling ability that made him hugely popular with City fans.

In 2005,he sold to Chelsea but he returned to Manchester City in 2008,after not so fruitful three years with Chelsea.He spent three more years with the blue side of Manchester,before leaving for QPR in 2011.

Alan Oakes holds the honour of being both Manchester City’s most decorated player and their top appearance maker over his eighteen-year stay with the club.

He joined Manchester City as an amateur in 1958, turning professional and making his debut a year later. Oakes blossomed under the stewardship of Joe Mercer and Malcolm Allison to become the heartbeat of the City side during their most successful period.

Kinkladze was unlike anything City supporters had witnessed before, a marvellously evasive dribbler with an eye for a through-ball and the odd wonder goal.

Kinladze joined Manchester City from Dinamo Tbilisi in 1995, where his dribbling ability and spectacular goals made him a cult hero, winning the club’s Player of the Year award in two consecutive seasons. Kinkladze stayed with Manchester City despite relegation to the Football League First Division in 1996, but the club continued to decline, and after a second relegation in 1998 he joined Dutch champions Ajax.

Manchester City brought Yaya Toure for a fee of £24m from Barcelona in 2010.He was allocated jersey number 42, which is the reverse of the number 24 jersey he sported at Barcelona, since Patrick Vieira had already been allocated that number.

In his first year of English football, Yaya helped City to win the FA Cup, scoring the only goal in the semi-final against rivals Man Utd and also in the final against Stoke City to lift City’s first major piece of silverware in 34 years. The club also secured Champions League qualification for the first time in modern football history.

The little Spaniard is arguably the most consistent player not only in Manchester City’s squad but also in the whole of Premier League since he has joined the club in 2010.

His vision , passing , ball control , dribbling , makes him one of the best playmakers in the world.He retains possession in tight spaces, and manages to create space for himself and team-mates to open up a defence.

He has been vital to City’s recent success and many supporters rate him as the greatest player in the club’s history. While the 2016-17 season probably wasn’t his best, but he was named City’s Player of the Year.

Bell was signed by Manchester City from bury in 1966 and he spent thirteen glorious years with the club.

Dubbed ‘The King’ and worthy of having a stand at the Etihad Stadium named after him, the former City midfielder is still regarded as one of the best players – if not the best player – to have donned the sky blue shirt.

In his first season with the club,he helped the team earn promotion to the First Division. By the start of the 1967/68 season, City were on the verge of once again being a major force in English football. The arrival of Francis Lee in October proved the catalyst that powered the Blues to their first Championship since 1937. At the heart of this team was Colin Bell.

In 1969 Manchester City won the FA Cup with a 1–0 victory over Leicester City thanks to a goal by Neil Young. In 1970, Manchester City and Bell won two trophies, the League Cup and the European Cup Winners’ Cup.

It was in 1975-76 season when Martin Buchan’s mistimed tackle meant Colin was stretchered off with damage to his knee so serious it effectively meant his playing days were over.He was still only 29 and proved an enormous loss not only to City but also to the national side.

In total, he made close to 500 appearances for the Blues and remained at Maine Road following his retirement, working with the youth team.