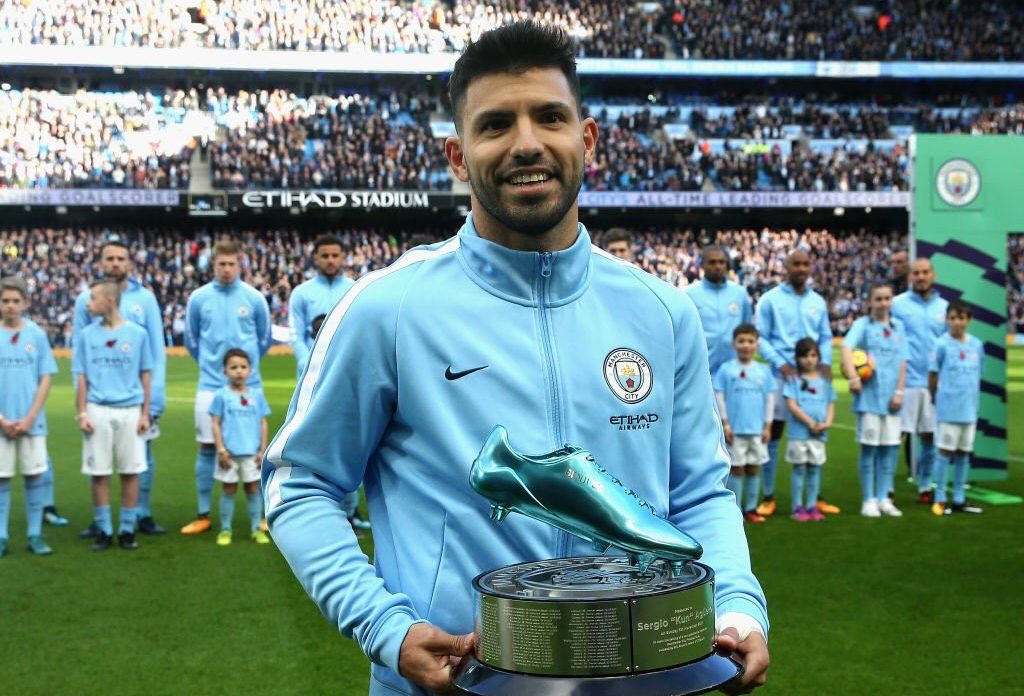 Manchester City stands today as one of the most elite clubs in the top flight of English football. Over the course of its history many good players have played for the club. Some of these players left an everlasting impression on the club by scoring numerous goals and some are still doing so. Let us have a look at Manchester City top 10 goalscorers of all time.

Here are the Manchester City top 10 goalscorers of all time–

Tilson was part of the City team that won both the FA Cup and the League Championship (Division 1) in the 1930s. In his first season Tilson made 6 appearances and helped City earn promotion to the first division. Tilson had forged a prolific partnership with winger Eric Brook at Barnsley and City decided that rather than break up the pair, the Club should buy them both and for just £6,000. Tilson would make 264 league appearances for the team and score 110 goals in the league.

Billy Gillespie played for Manchester City between 1896 and 1904 enjoying eight productive years with City, winning two Division Two Championships and the FA Cup. He scored a total of 132 goals for City, 126 of which came in the league.

Tommy Browell was one of City’s greatest ever strikers and still sits proudly in the all-time top 10 some 90 years after leaving the Blues.in 1919, Browell formed a prolific goalscoring partnership with Horace Barnes. In the 1920–21 season Manchester City finished runners-up in the league, and Browell set a career-best of 31 league goals.

He settled in Blackpool after he retired and became a tram driver, passing away on 5 October 1955.

Lee started his professional career with Bolton Wanderers. Manchester City manager Joe Mercer signed him for a club record transfer fee of £60,000 in 1967. He made his Manchester City debut in a 2–0 win over Wolverhampton Wanderers at Maine Road, and scored his first Manchester City goal the following week at Fulham. In his first season at the club, he scored 16 League goals in 31 appearances, playing a crucial role in City’s push for the 1967–68 League Championship; Mercer described him as “the final piece of the jigsaw”. The title was decided on the final day of the season, City requiring a win at Newcastle United. City won the match 4–3, Lee scoring one of the goals, and were crowned champions. The following season Lee was part of the Manchester City team which won the 1969 FA Cup.

Part of the suitably named ‘Holy Trinity’ of Bell, Summerbee and Lee, he remains one of the Club’s greatest players.

Billy finds himself a place among the controversial list of players who played for both Manchester City and Manchester United.

He spent 15 years at both the Manchester Clubs,though his time at City was divided into two spells.He first joined City in 1894 and kept playing for them till 1906,making 339 league apps and scoring 129 goals in the league. He then moved to United in 1906 and played 303 league matches for them but could only score 35 goals. He left United in 1921 to rejoin Manchester City where he stayed till 1924 and made 28 apps in that period without finding the back of the net.

In August 1953 he had a trial with Manchester City, and made his debut two months later against Tottenham. The teenage Hayes appeared in the 1955 FA Cup Final, but finished on the losing side. 12 months later Manchester City reached the final again, and Hayes scored the first goal in a 3-1 win. Hayes was a regular goalscorer in the late 1950s and early 1960s, until a knee injury occurring in September 1963 had a noticeable effect on his abilities, after which first team opportunities became limited. He was transferred to Barnsley in 1965.

Colin Bell remains one of the greatest players to have ever played for City. With his limitless energy, skill and all-round ability, he was the beating heart of one of the most successful Manchester City sides ever.

Bell was in his prime when he suffered a serious knee injury during a Manchester derby causing severe knee ligament damage. He somehow battled back to play a handful of games for the Blues and after his testimonial in December 1978 – a Manchester v Merseyside match – he was forced to retire in August 1979. A Club legend. 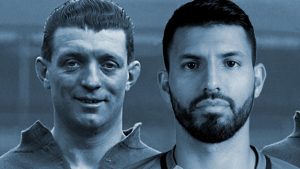 Tommy Johnson holds the record for League goals scored for City in one season with a grand total of 38. Johnson marked his debut in 1919 with a goal, but would take three more years to establish himself fully in the Blues’ starting line-up, forming an impressive partnership with Horace Barnes.

Brook is regarded as one of Manchester City’s and England’s greatest ever players.Eric Brook was an unorthodox outside-left who often popped up in the centre-forward position if the occasion demanded.

In 1928 Brook and team-mate Fred Tilson were transferred to Manchester City for a combined fee of £6,000, the pair making their debuts on 17 March against Grimsby Town.Brook possessed a thunderous shot and was the natural penalty-taker for the team. He rarely missed a game and, with 177 goals for the Blues, he is 2nd in this list of  ‘Manchester City top 10 goalscorers of all time’ – an incredible record for a winger.

Eric retired in 1940 following a motor accident and sadly passed away in March 1965.

Manchester City smashed the Club record transfer fee to bring him to Manchester and he announced his arrival with two goals from the bench against Swansea and has been breaking Club records ever since.

He wrote his name into City folklore with his title-winning goal against QPR in his debut season. He is the highest South American scorer in the history of the Premier League, and reached 100 goals in the division faster than any player other than Alan Shearer. On 1st November 2017, he scored against Napoli in the Champions League to become the top scorer of Man City.

Sergio was presented with a bespoke blue glass boot by Manchester City to commemorate his fantastic achievement of breaking the Club goalscoring record .