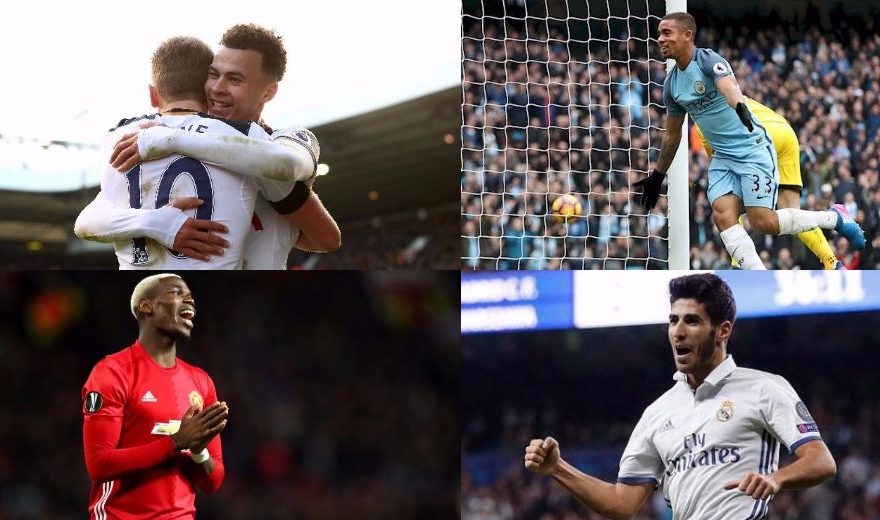 Messi and Ronaldo have formed a duopoly over the Ballon d’Or award since 2008,with Messi winning it 5 times and Ronaldo winning it on 4 occasions. It doesn’t even look like that the trend will stop in the next 2-3 years. However,the time will come when both these two will eventually step down the podium for someone else and today in this article we will have a look at such potential future Ballon d’Or winners.

Harry Kane has been one of the best Premier League striker over the past 3 seasons,winning the golden boot in two of those seasons. He has not only led Spurs to Champions league football but also made them a serious title contender.

Harry Kane has already made it clear that he aim to become the best footballer in the world, revealing he wants to win the Ballon d’Or in the future.

If he continues to perform that way,there is no reason why he can’t lay his hands on that prestigious trophy.

French forward Ousmane Dembélé is one of the best young footballers in world football.The 20-year-old is strong off both feet, quick, skillful and powerful.He is a good dribbler and has great control over the ball.

In his first season in Germany with Borussia Dortmund, he finished with 10 goals and 12 assists, something that is nothing but special for a 20-year-old.

His performances have attracted many big clubs and Barcelona are reportedly interested in signing him. If he joins them ,then playing alongside Messi could improve him a lot and he could even learn a thing or two from the great man himself about winning Ballon d’Ors.

Renato Sanches had a disappointing last season with Bayern Munich,where he only started six Bundesliga games, failing to score or provide an assist in 25 appearances in all competitions ,completing 90 minutes on just one occasion.

However,one bad season does not mean the end of the world for the European Golden Boy award winner. He is just 20 years old and has a lot of time on his side.

He has all the ingredients to become a world-class midfielder,all he need is proper training and guidance.

The only thing that stands between Eden Hazard and the Ballon d’Or podium is goals. The Belgian midfielder does not score much goals like Lionel Messi and Cristiano Ronaldo. But just like those two, he is also the main man of his team.

Hazard narrowly missed out on the PFA Player of the Year award to team-mate N’Golo Kante last season but the winger was instrumental once again to Chelsea’s success.

If Hazard start scoring more goals, then he will surely be a strong contender to dethrone those two for the most prestigious individual trophy in world football.

Dybala has emerged as one of the Serie A club’s most prized assets and is regarded as one of the best young players in Europe. Paulo Dybala has openly described Lionel Messi as his “idol”. He grew up emulating the Barcelona superstar.

In his first season with Juventus he finished the season as the club’s top scorer with 23 goals in all competitions and 19 goals in Serie A, as the club celebrated their Serie A title victory. He followed that up with another league title last season.

The Argentinian is on his way to become the next big thing in world football.

Marco Asensio was a hardly known name a couple of seasons back, but now he is tipped to become one of the best footballers of this generation.

There were flashes of brilliance last season but it wasn’t until the Spanish Super Cup against Barcelona where he made himself a hero by scoring two wonderful goals over two-legs to lift the trophy.

Suarez was really unfortunate to not to finish in the top 3 of the Ballon d’Or in the past two years. He has been excellent his joining Barcelona in 2014. During this time he has won the European Golden Shoe for finishing as top scorer in the 2015-16 season, La Liga Pichichi Trophy in 2015–16 among a host of many other individual trophies.

He was a major reason why Barcelona won the treble in his first season with the club in 2015. If he can continue his form,he is very likely to force his way to the Ballon d’Or podium.

Another footballer who needs to add goals to his tally if he wishes to lay his hands on the Golden trophy is Paul Pogba.

Pogba became the most expensive player in the world when he sealed an £89million move to Old Trafford last summer and as a result a lot was expected of him. However ,his first season wasn’t really up to the mark and the 24-years old French International will hope to perform a lot better this term.

Few eyebrows were raised when Manchester City paid £55 million to secure the services of Kevin De Bruyne from Wolfsburg in 2015, but now it seems like one of the best business done by Manchester City in the past few years.

Manchester City manager Pep Guardiola is a fan of the Belgian midfielder and said ”He’s able to do what he wants”. Pep also called him Manchester City’s Lionel Messi last year. A big compliment indeed.

PSG shook the whole world when they paid the release clause of Neymar, 222 million euros to secure the services of the Brazilian superstar from Barcelona.

Already a Ballon d’Or finalist, Neymar is well on track to be the first player to break the Messi-Ronaldo jinx on the trophy.

Already a legend and poster boy of his country, Neymar needs to guide PSG to Champions League glory if he is to put a strong case in winning Ballon d’Or .

Winger Gareth Bale is seen has Ronaldo’s heir to the throne at Los Blancos, and has proved he can be called upon when needed. The former Spurs star has already won the UEFA Champions League, La Liga, Copa del Rey and FIFA Club World Cup with the Spanish giants, while also giving match-winning displays for Wales.

The biggest problem that Bale has faced over the past few seasons is his fitness. If he can stay injury-free and keep on performing well, he could make it to the top 3 of the Ballon d’Or very soon.

Griezmann has been one of the top players in a star-studded La Liga over the past couple of seasons. Technically and positionally brilliant, and intellectually sharp, the Frenchman has performed exceptionally well over and seems to be not too far away from challenging Messi and Ronaldo for the world’s best footballers tag.

He is a great player and his performance for Atlético Madrid and French National team has already made him a star . Having finished 3rd in last year’s voting ,Griezmann will hope to improve on that position.

Jesus joined Manchester City’s team in January and has already made a big impact on the sky blues. Remarkably, in his first six months in the Premier League, he scored seven goals and set up four in just 10 appearances, and if it wasn’t for his injuries he could have scored more.

The Brazilian is seen as the long-term successor to Sergio Agüero, and his pace, energy and movement make him an ideal candidate to fire Pep Guardiola’s project into the future.

Alli is one of the best young midfielders right now, and has won PFA Young Player of the Year twice in a row . He is also considered an all-round player who can play effectively as a second-striker.

Dele Alli was spectacular for Tottenham in his first two seasons and has started this season pretty well too. A specialist in finding and exploiting space, Alli is highly rated by Spurs boss Mauricio Pochettino , who said “In the box, he looks like a striker, and outside the box, he plays like a midfielder.”

Given his age and stellar abilities, there is no frontier that he can’t triumph over.

Football’s latest sensation ,Kylian Mbappé has been the talk of this transfer window. Many big clubs are interested in acquiring his signature and it will be interesting to see whether he stays at Monaco or join any other European heavy-weights.

Last season He scored 26 goals for Monaco in 46 outings, aiding them to a Ligue 1 title and the semi-finals of the Champions League.

Kylian Mbappé’s future club could play a vital role in the development of the French international and if continues to play and perform like that, he will be a Ballon d’Or winner soon.