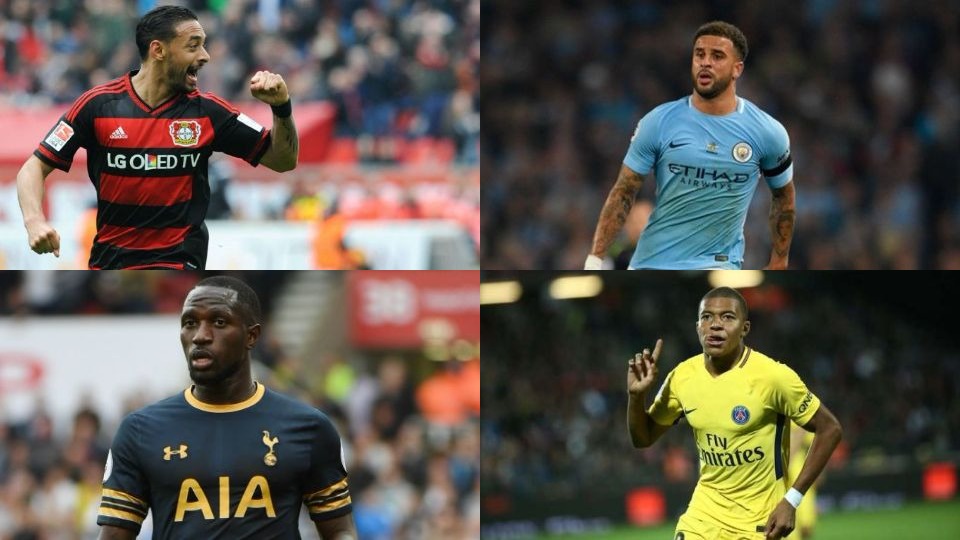 Speed is something that catches our attention first. The Fast and Furious guys in all type of sports got their own franchise in the field of stardom. A player running at full speed is a delight for the fans and a nightmare for the opponents.

Speed is considered very important attribute in the area of football. Covering a large distance in a short amount of time often gives the player an advantage over the rest. Sometimes even, speed alone takes the game from the opposition.

So can you guess which guys are the leading speed stars in the field of football? Here we present top 10 fastest players in the world

This 27 years old English international is known for his pace and sharp tackling. Signed from Spurs in the summer, he has solved City’s right-back problems. He has played 18 times in this season of Premier League and provided 4 assists. His passing and dribbling in the midfield have been strong through the season. Though he can improve his crossing a bit.

Mexican midfielder Jurgen Damm is the only Liga Mx player securing his name in the list. This 25-year-old huge lad (6 feet 2 inch) can easily glide himself past the opposition defensive line due to his speed. However, a little training and teaching may help him to learn how to master his skills. He has only managed to score only 8 times in 67 appearances for the Tigers.

27 years old German attacking midfielder, Karim Bellarabi is a strong dribbler and master of the key passes. He has the knack of cutting inside from the flank and also his counter attacks are deadly for the opposition. However, he is finding it difficult to get enough gametime for Leverkusen this season and has only 1 goal and an assist besides his name in 8 appearances in this season of Bundesliga.

At the age of 30 ,Shane Long is still quite fast. This Southampton Forward is best known for his crossings and holding the ball ability. He likes to play short passes and is a genuine threat in indirect set pieces. Though he hasn’t yet outflanked himself in this season and has only managed to assist once in 8 appearances in English Premier League.

The Tottenham midfielder is stuffed with lots of speed. This Frenchman is strong in crossing and key passes. His layoffs are unique and create chances here and there. In this season he has managed to score once and provide an assist in English Premier League. His bizarre lone runs from the midfield proves the significance of his position in this list.

Aanholt plays mostly in defence or sometimes in midfield too. He likes to dribble and shoot from the distance. Though he is weak in aerial duels, his trigger run from the deep boosts the attack. As a defender his ball intercepting ability is quite commendable , he has made 13 apps for the Eagles this season across all competitions.

Leroy Sane is a versatile midfielder who can play any position in midfield (right, middle or left). He is 21 and 183 cm tall. His runs are fascinating and likes to cut inside in pace. He is also a brilliant dribbler and likes to play short passes. He has been brilliant this season for Manchester City. He has scored 6 times and made 8 assists so far this season.

The name may be you have never heard about. But this Colombian forward is three kilometres faster than Barcelona magician Messi. Berrio moved from Brazilian Série A club Atletico National to the league leaders Flamengo in January of 2017. He always keeps himself in the neck of opposition defenders to utilise his sheer pace and clinch finish.

The Golden Boy of 2017, Kylian Mbappe is amazingly talented. At the age of only 19, he is already among the best footballers in the world . He possess a blistering pace and superb dribbling skills. He is a nightmare for the defenders to defend against. His partnership with Neymar and Cavani is among the world’s deadliest trios. He has already scored 8 goals and made 8 assists in Ligue 1 apart from 4 goals and 3 assists in UCL for PSG.

No surprises here , with the Welsh wizard being the fastest footballer in the world. He has recently been struggling with injuries and it has limited his game time but a recent survey suggested that he still got it.

Who can ever forget when he left past Maicon for dead at the San Siro in 2010, or when he took a detour off the pitch to embarrass Barca’s Marc Bartra in the Copa Del Rey final. Bale loves to torment any defender with his outside or inside cutting, gliding past with ease.

Checkout: Top 10 Dribblers In The World