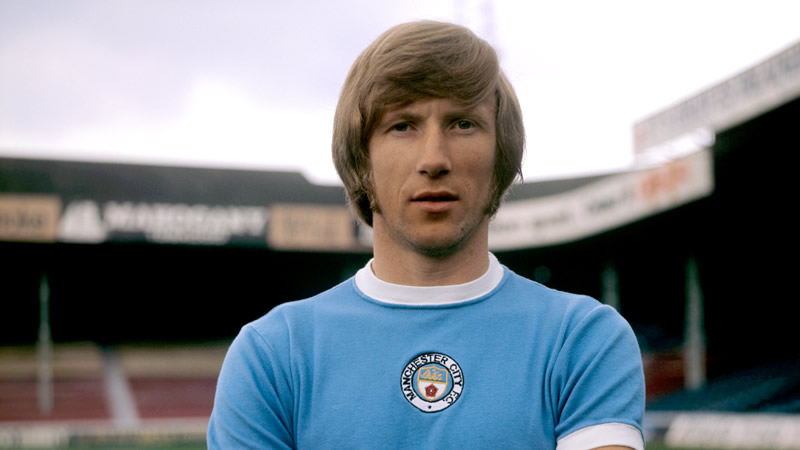 So desperate was Malcolm Allison in the summer of 1966 in wanting to sign Colin Bell that he would sit in the directors’ box watching Bury’s matches(Bell used to play for Bury then) and vocally criticise the 20 year-old inside forward Bell ,that he couldn’t head the ball, couldn’t pass it and was generally hopeless. Allison hoped his vocal comments would discourage the other watching managers and scouts, many of whom were also thinking about signing the talented Bell.

Fortunately for him, it worked. Bell was eventually offered contracts by both City and Blackpool but he decided his chances of a better career stood in Manchester and joined the club in 1966. It proved to be one of the best signings in the club’s history. From his first appearance and goal at Derby, City fans knew Allison had struck gold and all it cost was a just £45,000. Ten games after his debut, he’d collected a Second Division Championship medal, his header at Rotherham proving to be the goal that assured promotion with three games yet to play. As for any team making their way up the ladder it was a tough season for City but Bell was born to play at that level, he bagged twelve goals and the side somehow managed to stay in the division. It was just the beginning for Bell and the newly promoted side.

Colin Bell was born shortly after the Second World War and spent his early years playing for Bury. His talent was certainly visible to the club from an early stage and he soon became the club’s captain, leading them from the middle of the park, he scored 25 times in three seasons, averaging a goal every three games. An average he would maintain for the rest of his career.

City had made a number of quality signings in Francis Lee and Mike Sumerbee who along with the now usual contribution from Bell served the Citizens the League title. It was a hard fought campaign but a victory on the final day was all that was required to clinch the title in 1968. A trip to Newcastle United stood between City and history and with the match struck at 2-2 at half time, it seemed as though they might fall at the final obstacle but once again, Bell was ready to turn the game. Two assists in the second half helped the away side to an uncatchable lead and first league title in 31 years.

Not only was Bell perhaps the most complete footballer, he also showed an amazingly high level of fitness and stamina. Bell’s form had not gone unnoticed by Sir Alf Ramsey who gave him his first England cap in a friendly against Sweden at Wembley, just eleven days after City’s Championship success at Newcastle. He made his debut aged 22 against Sweden and from his dearest midfield role, helped them to a 3-1 victory. He managed to hold his place in the side for the next game against West Germany, but he would have to wait a little while before he became a regular starter for England.

Perhaps it was just as well, because back at City, Bell was really coming in his groove and, though they fail to defend their league title, they did win the FA Cup, beating Leicester City in the final. The next season they were back among the trophies when the won the League Cup and phenomenally, the Cup Winners Cup.

With success coming smoothly at club level it was no surprise that he was also becoming a regular for England for whom he continued his majestic goal scoring with a winner against the Dutch and a goal against Brazil who would soon go on to become World Champions.

Over the next few years City began to fall back down the table and as a team performed in a rather unspectacular way but Bell was always a key man for the team, their slide would have been much more striking were it not for the special, energetic midfielder. Throughout his time at the club he was able to hit double figures in goals every season. Trophy-wise it was a unfruitful period for Bell but on the field he was going through a real golden period. In 1975 he scored 15 goals in the league and four goals in three internationals against Czechoslovakia, West Germany and Scotland which led him to be labeled as “the most finished article in the modern game.”

Colin Bell had the world at his feet but it was about to come crashing down. In the derby against Manchester United he was on the receiving end of a smashing tackle from Martin Buchan which critically damaged his knee. Worse still, the injury was misdiagnosed and on his return he disintegrated his cartilage which ruled him out for another 18 months.

Throughout his career, the defining attribute of Bell’s play, (apart from his goals), was his energy and athleticism. Even his nickname, “Nijinsky”, was in tribute to this as he was nicknamed after the famous racehorse of the duplicate name. His injury changed him as a player and he never really recuperated and he hanged his boots in 1979 aged just 29.

Away from playing football, he continued to work at Manchester City where he was a youth coach and later an ambassador for the club. As a winner of one league title, two league cups, an FA Cup and a European Cup Winners Cup, he was one of the clubs most successful players ever and when the club vacated Maine Road, a stand at their new home, the City of Manchester Stadium was named in his honor.

A brilliant and a magical player for both club and country throughout a career that was ferociously cut short. Colin Bell was a club legend in every sense of the word.