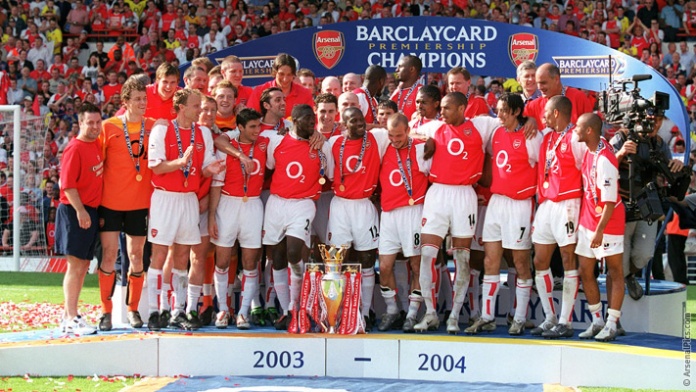 Arsenal are the only team in Premier League history to remain unbeaten a full season.They achieved this feat in 2003-04
season under manager Arsene Wenger.They won 26 games and drew 12 in that season.

Arsenal had finished runner-up to Manchester United
the previous season and were itching to regain the title.Arsenal were among the favourites to win the Premier League along
with Defending champions Manchester United and Chelsea under their new owner Roman Abramovich,a Russian Billionaire.
Arsenal`s transfer activity was relevantly quiet.Though the club were able to retain the core of its team,successfully
negotiating new contracts with Patrick Vieira and Robert Pires.German GK Jens Lehmann was the only major addition
to the first team,who replaced David Seaman.

AUGUST
1.On the opening day of the season,Arsenal hosted Everton at Highbury.It was just 25 minutes into the game when Arsenal
found themselves a man down as Sol Campbell was sent off for his challenge on Thomas Gravenson.Despite being a man down
Arsenal found themselves a goal up with a Thierry Henry penalty.The hosts continued to attack and doubled their lead
in the 58th minute ,with Pires opening his account of the season.With six minutes left on the clock ,Tomasz Radzinski
scored for Everton ,but it was too little too late and Arsenal won their first game 2-1.
2.Arsenal next game was an away trip to Middlesbrough,which they com comprehensively by 4 goals,with goals from Henry,
Gilberto Silva and Sylvain Wiltford(x2).
3.Three days later Henry and Campbell scored as Arsenal beat Aston Villa 2-0 at home.
4.Arsenal maintained their perfect start to the season with a 1-2 away victory at Manchester City.
Going into the International break Arsenal were top of the league and were ahead of Manchester United by 3 points.

SEPTEMBER
5.In their first game after International game after the break,Arsenal faced newly promoted Portsmouth.
Portsmouth were the better team in the early stages of the game and took a deserved lead through Teddy Sheringham.
But soon Arsenal equalised through a Thierry Henry penalty,after Pires was fouled in the box,1-1 it ended.
6.A week later Arsenal travelled to face Manchester United.It was a clash of Titans between two title contenders.
In the 80th minute ,Vieira was sent off after he attempted to kick out at Ruud Van Nistelrooy.With scores 0-0
United were awarded a penalty in the dying minutes,but Van Nistelrooy hit the crossbar,0-0 it ended.At the final whistle
Van Nistelrooy was immediately confronted by several Arsenal players,which resulted into an altercation between both teams.

OCTOBER
8.Arsenal then faced Liverpool in the first weekend of October at Anfield.After conceding an early goal Arsenal had
to come back from behind to win the game 1-2,with Pires scoring the winner.
9.Arsenal`s next game was against Chelsea ,who were also unbeaten and were level with points with Arsenal.
Chelsea`s Gk mistake allowed Arsenal to take advantage and win the game 2-1.
10.In their tenth game of the season Arsenal travelled to face Charlton Athletic,that match was a 1-all draw.
after 10 games Arsenal had 24 points and they were top of the table.

NOVEMBER
11.In the first game of november,Arsenal travelled to face Leeds United at Elland Road.Arsenal won the game 1-4.
12.A week later attention turned towards North London Derby on 8th November.Arsenal conceded an early goal in the game
after Darren Anderton capitalised on a defensive mix-up to give spurs the lead.But Arsenal scored two late goals
to win the game.
After this game followed 2nd International break of the season.
13.Arsenal`s next fixture was an away game to Birmingham City.Goals from Ljungberg,Bergkamp and Pires ensured that
their team completed hat trick of wins in november.
14.They were held to a 0-0 draw against Fulham in the last game of month.
After 14 games,Chelsea who beat Manchester United in their previous match,became table toppers replacing Arsenal.

DECEMBER
15.Arsenal played a 1-1 away draw in the first game of December to Leicester City.
16.The following week,a goal from Bergkamp earned Arsenal a 1-0 victory against Blackburn Rovers at home.
17.On 20th December Arsenal travelled to Reebok Stadium to plat Bolton.The game ended in a 1-1 draw,Arsenal manager Arsene Wenger
said that he was happy with a point.
18.On boxing day,Arsenal beat Wolves 3-0,with Henry scoring a brace.
19.Three days later, a Robert Pires goal ensured an 0-1 away victory at Southampton.
Arsenal has now gone half of the season unbeaten.And there was a sense of Invincibility in their game.

JANUARY
20.Arsenal first game in the new year was an away fixture at Everton.Kanu had given Arsenal the lead in the first half,
only for Radzinski to score a late equalizer for Everton.The game ended 1-1.
Manchester United Victory on the same night increased their lead at the top to 3 points.
21.Three days later,Arsenal hosted Middlesbrough at Highbury.A Domimant Arsenal won the game 4-1 and moved back to the top of the table.
22.A Thierry Henry brace helped Arsenal beat Aston Villa 0-2,the following week.
At the end of december Arsenal again moved back to the top of the table,leading United by 1 point.

FERRUARY
23.Arsenal won all of their 5 games in February,with the first one coming against Manchester City at home.
24.They then went on win an away fixture at wolves by 1-3.
25.Three days later Arsenal beat Southampton 2-0,with Henry scoring his 100th and 101th Premier League goals.
26.Arsenal next league game was away to Chelsea.Arsenal found themselves a goal down just after 27 seconds into the game,
but equalised in the 15th min through Vieira,with Edu scoring the winner for Arsenal six minutes later.
27.In the last game of February,Arsenal hosted Charlton.Arsenal scored twice in the opening 4 minutes and won the game 2-1.

After 27 games Arsenal were top of the table and had 67 points,nine more than Chelsea and United.

MARCH
28.Arsenal continued their good form in march,Henry and Pires scored in the 2-0 away win at Blackburn Rovers in their first game of the month.
29.In their next game Arsenal hosted Bolton.Arsenal were 2-0 up just after 24 minutes with Pires and Bergkamp finding the back of the net.
A ninth successive league win ensured that Arsenal were top of the table 9 points ahead of Chelsea and United.
30.Arsenal faced a stern test in the last game of March as Defending champions Manchester United travelled to face Arsenal at Highbury,in
what promised to be a high voltage action.Henry gave Arsenal the lead with a long-range effort.With time running out,Louis Saha equalised
for United.Arsenal came close to finding a winner in the dying moments but Lauren had his shot saved.1-1 it ended.
After the match Sir Alex Ferguson said that Arsenal will go on to win the league.Arsenal also set a league record of 30
games unbeaten from the start of the season.
Arsenal could not continue their tremendous league form in the cup games,and were eliminated from FA cup and League cup
within a space of week.

APRIL
31.Arsenal hosted Liverpool at Highbury on 2nd April.An impressive start by the visitors saw them leading by 1-2 at HT.
After the break,Arsenal gave a champion like response with Henry scoring a hat trick to win the game 4-2 for Arsenal.
32.Two days later Arsenal played a goalless draw away at Newcastle.
33.In their next game Arsenal hosted Leeds United,in which Henry scored 4 times ,as Arsenal thrash Leeds 5-0.
After the match Wenger said that ‘Henry is the best striker in the world’.
With Chelsea unable to gain maximum points,Arsenal now only needed a single point in their next game at White Hart Lane
to clinch the title.
34.It was end to end stuff in the North London Derby,with Arsenal scoring the first two goals of the match,but Spurs replied in the second half to make it 2-2,that’s how it ended.
At the end of the match,Arsenal players celebrated as they were newly crowned EPL champions.

MAY
At the start of May Arsenal played two consecutive draws.
35.36.First a 0-0 draw with Birmingham City then a 1-1 draw with Portsmouth.
37.In their second last game of the season Arsenal faced Fulham,a Reyes goal was good enough for Wenger’s men to pick up
3 points.
38.In the last game of the season Arsenal faced Leicester City.Arsenal conceded an early goal,but turned the game in second half with goals from
Henry and Vieira.With 26 wins and 12 draws,Arsenal became the first English team after Preston North End to go a full season unbeaten.