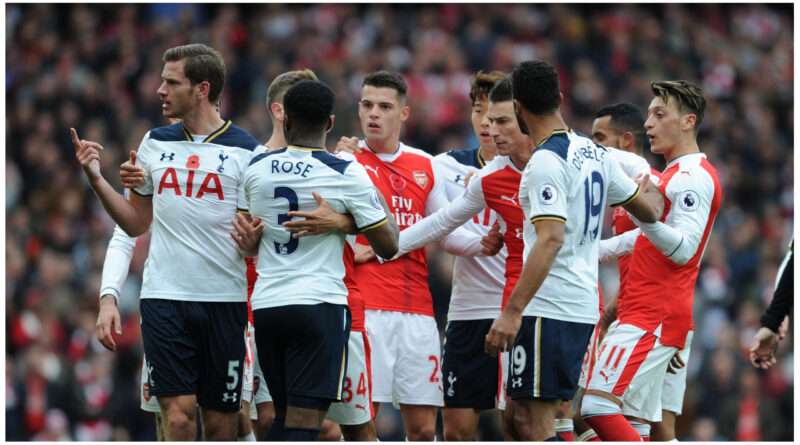 The North London-based club are the third most decorated club in London. They have a great history of the club which was founded in 1882, 130 years ago. Tottenham have won top-tier English titles, in 1951 and 1961. Spurs have won 24 major honours and are the first London club to win a European trophy, the UEFA Cup Winners’ Cup in 1963.

Over the years, they have shared some great rivalries with different clubs in English football. In this article, let us have a look at the biggest rivals of Tottenham Hotspur.

Here are the six biggest rivals of Tottenham Hotspur.

Traditionally, a significant rivalry was based on geographical proximity or, less often, historical – and often delightfully petty – beef. It made sense. However, this rivalry has nothing to do with any of that. It’s hard to pinpoint exactly when the nascent rivalry began. But we do know when it peaked, during the final of UCL in 2019.

The rivalry went from low-key Tottenham vs Liverpool rumbles to an outright Kane vs Salah war in a Golden Boot battle. Also, the fact that both the teams go head to head for a top-four finish, makes the battle all the more interesting.

Before the turn of the century, the meetings of Tottenham Hotspur and Manchester City were defined not so much by rivalry but by a couple of other themes. But since the two battled for fourth place and a Champions League spot in 2009/10, there has been an undoubted escalation of ‘hostilities’.

When the two sides met in May 2010, with Champions League football for the following season on the line, the game was suitably tense. Spurs of course came out on top, Peter Crouch heading in the late winner. Thus, this started a low-scale rivalry which has increased over the years, especially with Manchester City dominating English football.

There have been many sliding-doors moments in the complicated history between Manchester United and Tottenham Hotspur. Like in 1984, former Spurs chairman Irving Scholar thought he had agreed a “concrete” deal for Sir Alex Ferguson to come to White Hart Lane, only for the Scot to go back on it.

In 1998, Tottenham thought they had agreed on a deal for United’s then-substitute striker Ole Gunnar Solskjaer, only for the striker to refuse and insist he would prove his worth at Old Trafford.

On the field, Manchester United vs. Tottenham Hotspur is a fixture that has produced some nerve-wracking and enthralling contests over the years. United’s incredible comeback in 2001 when they came back from 3-0 down at halftime to win the game 5-3 is the most memorable. However, 6-1 thumping of Manchester United by Spurs in 2020, is something that both the clubs will never forget either.