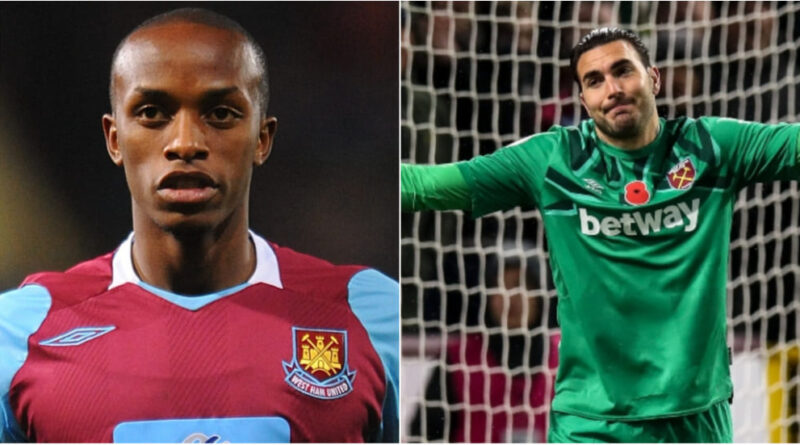 What comes to your mind, when you think of West Ham United? Most people will think of their English academy graduates, like Frank Lampard, Joe Cole, Rio Ferdinand, Michael Carrick, Jermain Defoe, or Glen Johnson.

And no one can also forget that three West Ham players were members of the 1966 World Cup final-winning England team: captain Bobby Moore and goalscorers Geoff Hurst and Martin Peters.

However, the club also signed some players which turned out to be a disaster for the team. In this article, let us have a look at some of the worst West Ham signings ever.

Based on the performances, signing fee, attitude, and fans’ opinions here are the 15 worst West Ham signings ever.

His exploits attracted the attention of West Ham United, who signed him for a fee of £600,000 in August 1988. He made his debut in a 4–0 defeat to Southampton. His stay at the Boleyn Ground proved to be largely unsuccessful as an initially promising strike partnership with Leroy Rosenior floundered as he scored only six goals in 25 First Division games as John Lyall‘s “Hammers” suffered relegation in 1988–89.

Kelly also failed to find form for the club under new boss Lou Macari in the Second Division, scoring just two goals in 24 matches of the 1989–90 campaign. I think that I have proven my point here, 2 unsuccessful seasons, the second one being in the second division and scoring a total of 8 goals in 49 matches is as bad as it sounds.

Rigobert Song was signed from Liverpool. He had not impressed at all in three years at Anfield, so it was a strange decision for West Ham to pay to bring him to Upton Park.

It was first said that he was brought in as a replacement for Rio Ferdinand who had left for Leeds United in a £18 million deal. Just 24 games in two years was enough for West Ham to realise their mistake. He is, without a doubt, one of the worst West Ham signings ever.

Harry Redknapp signed Camara from Liverpool for £1.7 million. Camara seemed a good buy at the time, thanks because of his direct play and pace. But the Guinean international failed to settle at Upton Park, and failed to live up to the form he found at Liverpool. He made only 14 appearances without scoring and left after his contract was terminated following West Ham’s relegation.

Redknapp bought Florin Raducioiu from Espanyol for £1.5million in August 1996. Although initially impressed, it quickly became clear to Redknapp that the Romanian was not going to cut it.

Redknapp’s patience finally ran out when Raducuioiu failed to turn up for a League Cup tie at Stockport, which the Hammers went on to lose. The Romanian only featured 11 times for West Ham and managed to score two goals. Raducioiu finally left Upton Park in January 1997, returning to Espanyol. He is one of the worst West Ham signings ever.

After nine years at Arsenal, Ljungberg joined London rivals West Ham United in 2007, on a four-year contract. But apparently, his magic had gone, the spirit had died, and there were no more vibes.

He made 22 league starts, but his impact in those games…was minimal. He scored twice, and…that’s probably it. Throughout the season Ljungberg was sidelined by injuries, which never let him get his rhythm back.

It didn’t really represent a terrific return on investment for West Ham, given that his wages were rumoured to be around £75,000-a-week, which was a monstrous amount of money for a team in 2007, that had only survived on the final day of the previous season.

Dyer completed joined West Ham in 2007 for £6 million, signing a four-year deal. Just ten days after his debut, he was stretchered off after a tackle by Joe Jacobson in a League Cup match against Bristol Rovers that resulted in his right leg being broken in two places.

The midfielder made only 30 appearances for West Ham without scoring a goal in his four years at the club. Chairman David Gold once said that Dyer cost the club £6million and by the time he left, had cost the club £10million in wages. Outrageous!