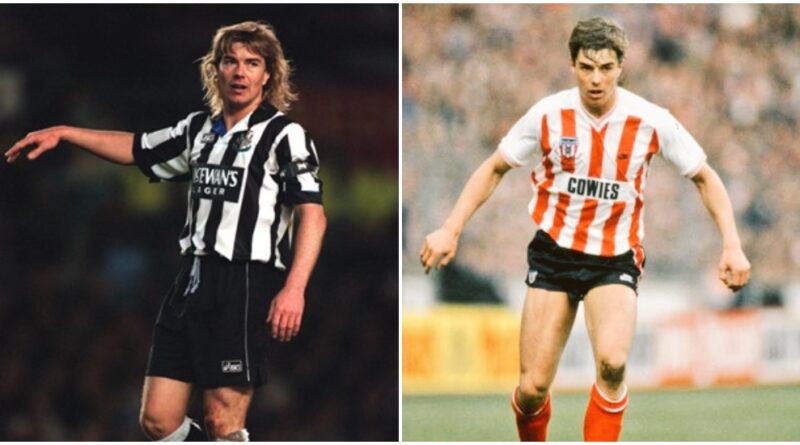 The tyne-wear derby is an inter-city rivalry in North East England between Newcastle United and Sunderland. Sunderland play their home matches at the Stadium of Light whilst Newcastle play their home matches at St. James’ Park. The first meeting of the two sides took place in 1883, with the first competitive fixture being an 1888 FA Cup tie, which Sunderland won 2–0. To date, both sides have won on 53 occasions while sharing 50 draws.

It is one of the biggest rivalries in England, but still there have been some players brave enough to cross the divide. In this article, we will have a look at some of the players who played for both Newcastle and Sunderland.

Here are the ten best players to have played for both Newcastle and Sunderland.

Geordie Jack came through the ranks at neighbours Sunderland and appeared over 100 times for the Black Cats.

No-one in the world could have envisaged what would unfold over the coming months when Colback netted the second in Sunderland’s 3-0 derby win at St. James’ Park in February 2014.

But after his contract expired that summer, Colback joined Newcastle on a Bosman – making him an instant hate figure on Wearside.

Plucked from non-league football by Newcastle in the 1980s, Waddle was widely acknowledged as one of the finest attacking midfielders in Europe.  He is undoubtedly one of the best players to have played for both Newcastle and Sunderland.

He enjoyed a glittering career with Tottenham Hotspur and Marseille before being relegated with Sunderland in their final season at Roker Park in 1997.

One of the few players to represent both sides and still be fondly remembered by each set of supporters. He is widely regarded among the best players to have played for both Newcastle and Sunderland.

Bracewell joined Sunderland for his first spell at the club in 1983. He moved to Everton a year later before making a return to the Roker Park in 1989 for a three-year stay.

Newcastle persuaded him to cross the Tyne in 1992 and he helped them to promotion to the Premier League under Kevin Keegan.

He left for a third spell at Sunderland in 1995 before departing for Fulham in 1997.

One of the best players to have played for both Newcastle and Sunderland, Clarke began his professional career in 1974 with Manchester City. He featured in thirteen league appearances before leaving a year later to join Sunderland.

Jeff Clarke made 213 appearances for the Black Cats in a spell that spanned seven years and included a Division Two championship win in 1976 and promotion in the 1979-80 season.

Clarke, who was brought in to replace international centre-half Dave Watson, formed formidable defensive partnerships with first Bobby Moncur and then Shaun Elliott in his seven year stay on Wearside.

Clarke made the switch from Sunderland to Newcastle United in 1982 after injury curtailed his final season with the Black Cats.

Having to overcome the disadvantage of being signed from Sunderland, Jeff settled into the Newcastle side easily and proved to be an outstanding centre-back during what was an exciting mid-eighties period.

Rightly considered as one of Newcastle’s finest ever captains, Bob ‘Bobby’ Moncur achieved what dozens of skippers have since failed to do – lift a major piece of silverware.

Moncur, rugged and determined, was handed the captain’s armband during the second-half of the campaign and having seen his club side qualify for Europe, Moncur then won his first cap for Scotland against Holland in Amsterdam in May 1968. He would later captain his country too.

But his greatest achievement for Newcastle was undoubtedly the role he played in the club’s Inter-City Fairs Cup success in 1969 – an eventful run against the likes of Sporting Lisbon and Glasgow Rangers that culminated in a two-leg final against Hungarian giants Ujpesti Dosza.

He was sold to Sunderland in 1974 after spending 12 years with Newcastle United. He spent two years with the ‘Black Cats’ before joining Carlisle United in 1976.