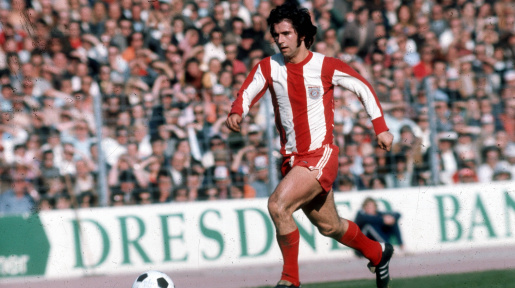 Considering the impact, achievement, team success, longevity, big-game performances, and records, here are the 10 greatest strikers of all time.

Jimmy Greaves is one of the greatest legends and his consistent form for Tottenham Hotspur—for whom he scored more than 200 goals—will mean his name will be forever treasured in those parts.

He was the starting striker for England in the 1966 World Cup and scored 44 times in a total of 57 appearances for his country. He scored 27 hat-tricks in first-level games, scored 4 goals twice times in international matches for England.

In the 1962-63 Premier League season, Greaves scored 44 goals from 49 showings; he remains the last man to score more than 40 in a single top-tier English season.

Romario is regarded as one of the most prolific goalscorers in the history of the game. He scored more than 1,000 official goals in an illustrious playing career and helped his nation claim the 1994 FIFA World Cup. He is one of the greatest first touch goal-getters of all-time, processed great shooting and dribbling technique.

Romario holds the record for most goals in a single season in Brazilian football league history with 70 goals in 2000. Domestically, he excelled for PSV Eindhoven, Barcelona, and other clubs. He is one of the greatest strikers of all time.

Having scored an amazing 277 goals in his club career, Van Basten is still fondly remembered at Ajax, Milan, and Netherlands and is considered to be one of the most gifted strikers to ever grace the game.

Van Basten played a starring role in UEFA Euro 1988 scoring 5 times which included a hat-trick against England, a goal in the semi-final against bitter rivals Germany and the stunning volley against the Soviet Union in the final. His career was tragically cut short due to injury at the age of 28, but the two-time Ballon d’Or winner gave us plenty of moments to remember.

Josef Bican, an Austrian-Hungarian, could run 100 metres in just 10.8 seconds. That’s Olympic pace (at the time), and most of his 607 league goals from 406 games were borne from his incredible speed and agility.

It is estimated by respected footballing statistics page RSSSF that Bican scored around 800 goals in all competitive matches, not including friendly games.

He played for an assortment of clubs but never left Eastern Europe in his career, meaning many were starved of his genius.

He tore the Hungarian domestic leagues apart to the tune of 352 goals for Budapest Honved, then moved to Real Madrid at the age of 31 and defied biology by scoring 156 more.

Puskas ended his career having won five La Liga titles and three European Cups, and being crowned an Olympic champion (1952) and World Cup runner-up (1954). He is undoubtedly, one of the greatest strikers of all time.