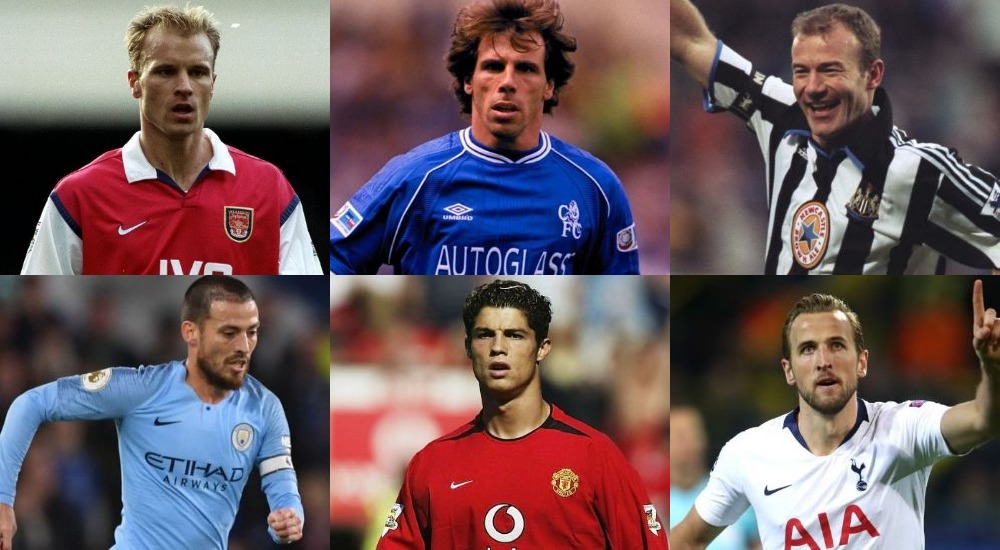 Since its inaugural season over 27 years ago, Premier League has gone on to become, if not the best, then certainly the most watched league in the world. In that time, several of the world’s best players have graced England’s top clubs. Some of them have left an everlasting memory in the mind of the fans. In this article, let us have a look at some of the greatest Premier League players ever.

Here is our list of ‘ 25 Greatest Premier League Players Ever ‘ –

Tottenham has experienced a resurgence in the Premier League thanks to Harry Kane, whose success got him the captaincy for the English national team.

Kane has been phenomenal in the Premier League, consistently ranking as one of the top goal scorers every season.

He’s done well for the Spurs over the past couple of seasons. He was one of the reasons that led Spurs to the UEFA Champions League final in 2019.

Petr Cech was one of the greatest goalkeepers the Premier League has ever seen. He achieved success with both Chelsea and Arsenal.

His best time was with the Blues under former manager Jose Mourinho. At Chelsea, Cech won lots of trophies between 2004 and 2015, including the UEFA Champions League in 2012.

Cesc Fabregas is a versatile threat who can play up front and behind strikers, and has a abundance of talent. He was one of Arsenal’s leading talismans in the post-Invincibles era.

He was a consistent player for Arsenal until his departure to boyhood club FC Barcelona. He then later returned to the Premier League and won the Premier League twice with them. He left for Monaco in the winter transfer window of 2019. He will always be regarded as one of the greatest Premier League players ever.

One of the greatest Premier Leaguye players ever, David Beckham was a prominent member of the Alex Ferguson-managed Class of 1992.

He was the star of the Manchester United treble-winning team. He was a consistent, dangerous, hard-working midfielder who was as important as anyone to the six Premier League titles United won during his time at Old Trafford.

Yaya Toure was one of the greatest Manchester City players ever — helping the Citizens win three Premier League championships. He was the the team’s anchor in midfield, orchestrating careful plays and creating assists for Manchester City’s top strike force.

The man from the Ivory Coast was ridiculed by some journalists as an overpriced defensive midfielder when City paid Barcelona for him in 2010. But he was a player who had absolutely everything in his locker – and when his team needed him most he rarely failed to rise to the occasion.

While no longer at the Etihad Stadium, Toure will go down as one of the greatest Premier League players ever.

Drogba is the all-time top scorer and former captain of the Ivory Coast national team. He is best known for his career at Chelsea, for whom he has scored more goals than any other foreign player and is currently the club’s fourth highest goal scorer of all time.

Joining from Marseille in 2004, he was the most important signing of the Jose Mourinho era at Chelsea. Once he established himself he was the perfect modern target man. His power, presence and goals were crucial to Mourinho’s Chelsea, and then to Carlo Ancelotti’s, and he won three titles before returning to help out in the 2014-15 title win too.

Schmeichel is the greatest goalkeeper of the Premier League era. A tall, strong and physically imposing goalkeeper, with a large frame and long reach, as well as excellent reflexes, he was also extremely athletic and agile for a player of his size. He is best remembered for captaining Manchester United’s 1999 UEFA Champions League winning side to complete a historic Treble for the side.

He was almost as important as Eric Cantona in giving Manchester United the presence, charisma and quality they needed to reassert themselves as the best team in the country in the 1990s. He won five Premier League titles at United, and later played for Aston Villa and Manchester City.

Ferdinand started off as a youngster at West Ham in 1995, before moving to Leeds in 2000 and then was involved in the record-breaking deal to United in 2002, where he spent 12 years, before two years at QPR.

He was consistently brilliant during his 12 seasons at Manchester United. He won the league six times there, anchoring the defence of arguably the greatest English team of this century. Neither United nor England have yet found a perfect replacement.

A strong, tenacious, commanding and physical defender, Terry is known for his aggressive tackling, positioning, leadership and his ability to read the game. The last great old-fashioned centre-back, Terry was one of the building blocks of the great Chelsea team of the 2000s, and outlasted all of them, not leaving the club until 2017.

Terry is Chelsea’s most successful captain, having led them to five Premier League titles, four FA Cups, three League Cups, one UEFA Europa League and one UEFA Champions League title since 2004. He is one of five players to have made over 500 appearances for Chelsea and is also the club’s all-time highest scoring defender.

Michael Owen’s career in the Premier League was played out at three clubs – Liverpool, Newcastle United and Manchester United. However, the mercurial strikers career could be defined by his brilliance at Liverpool and the injury problems that plagued him thereafter. His phenomenal record of 118 Premier League goals in just 216 matches helped propel the club to a treble in 2001.

Owen’s crowning glory arrived when he was awarded Ballon d’Or as he became the only player of English decent to win the coveted prize while still plying his trade in England’s top flight football. He was also named in the Premier League team of the decade in 2003. Known for his burst of pace and predatory instincts in the box, Owen was British football’s hottest property at the time. However, the striker was unlucky throughout his career with a spate of injuries he sustained.