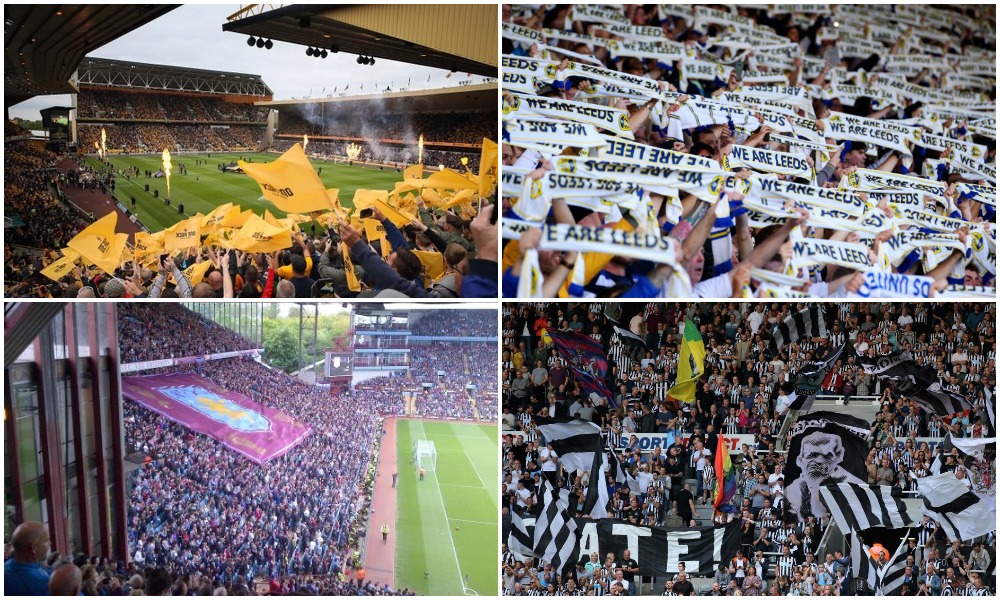 Atmosphere of the stadiums play a very important part in the performance of teams. A great atmosphere can lift the mood of the players and can act as the 12th men of the team. Buzzing home crowd can intimidate the visiting team. England is home to some of the best grounds. In this article, let us have a look at some of the best stadiums in England according to atmosphere.

Bases on the votes of the fans on various websites and forums. Here are the ten best stadiums in England according to atmosphere.

Wolves moved into Molineux Stadium in 1889, having played at various grounds in the first decade of their existence. Molineux was the site of the first ever league game played in English history. On 7 September 1889 Wolves beat Notts County 2-0.

In 1923, Wolves were able to buy the ground the stadium stood on, and soon after started building a new main stand, the Waterloo Road Stand. Molineux is dominated by the modern Stan Cullis Stand at one end of the stadium, which was opened in 2012. This impressive looking structure towers over the rest of Molineux and the roof steelwork can be seen from miles around on the Wolverhampton skyline. The stand is two-tiered, with a larger lower tier, with the upper tier having a large windshield on one side.

During the Summer of 2019, Wolverhampton Wanderers became the second club in the Premier League to install safety barriers, along rows of seating. It is one of the best stadiums in England according to atmosphere.

King Power Stadium is the home stadium of Leicester City. In August 2002 the club moved into its new home, only a stone’s throw away from their old Filbert Street ground. Then called the Walkers Stadium, it was renamed the King Power Stadium in 2011, under a sponsorship deal. However, some of the home fans refer to it as ‘Filbert Way.’

The stadium is completely enclosed with all corners being filled with seating. The sides are of a good size, built in the same style and height. The Upton Steel West Stand though on one side of the pitch does contain a row of executive boxes. The team dugouts are also located at the front of this stand. Running around three sides of the stadium, just below the roof, is a transparent perspex strip, which allows more light and facilitates pitch growth.

Bramall Lane has been the home of Sheffield United since the club’s establishment in 1889. It is the oldest major stadium in the world still to be hosting professional association football matches.

The United fans are particularly passionate and vocal about their club. This makes for a great atmosphere at games, but also can make it somewhat intimidating for the away supporter. It was one of those grounds that by just listening to the crowd you could tell what was happening on the pitch.

The ground has been an all-seater stadium since 1994 and is now made up of four main stands and two corner infill stands in the north-east and south-west corners. The north-west corner (as well as a lot of the land under the John Street Stand) contains the Blades Enterprise Centre, and the south-east corner is still open, although there are plans to fill it with seating as part of the strategy to build a leisure complex at the back of the South Stand.

One of the best stadiums in England according to atmosphere, Villa Park, has been the home of Aston Villa Football Club since 1897. The stadium has gone through various stages of renovation and development, resulting in the current stand configuration of the Holte End, Trinity Road Stand, North Stand and Doug Ellis Stand.

Away supporters are located on one side of the Doug Ellis Stand, towards the North end of the stadium. Up to 2,972 fans can be accommodated in this area, split between both the upper and lower tiers of the stand.

Normally the atmosphere at Villa Park is generally good. The facilities are adequate and the stewarding friendly. Although a modern stadium, visiting fans like the traditional feel of the ground.