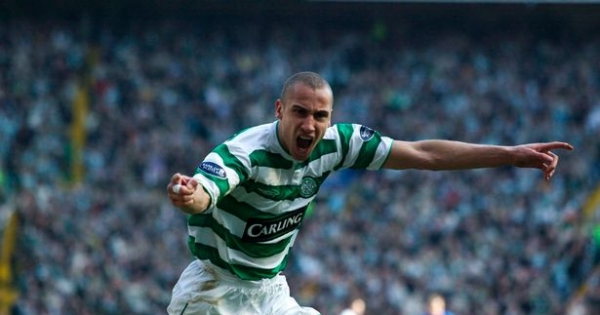 Celtic are one of the biggest and most followed clubs from Scotland. They have a massive fanbase around the world. In their rich history, many great players have donned the Celtic jersey and today we will have a look at some of the greatest foreigners to play for Celtic.

Considering players outside of Scotland, here are the 10 greatest foreigners to play for Celtic.

Hartson joined Celtic from the English club Coventry City in 2001. The highlights of Hartson’s time at Celtic would be scoring against Barcelona at the Camp Nou in the Champions League to earn them a draw or more importantly scoring a belter of a goal against Liverpool away from outside the box in a two nil win on the Road to UEFA Cup final.

In April 2005 he shared the Scottish PFA Players’ Player of the Year award with Fernando Ricksen and a short time later in May he was voted the Scottish Football Writers’ Association Player of the Year. Due to the close bond, Hartson felt with both Celtic Football Club and their fans, he has a tattoo of a large Celtic crest on his upper arm with the words ‘You’ll Never Walk Alone’ underneath in honour of the song which Celtic fans sing ahead of big games.

Alan Thompson was bought for a sum of £2.75m from Aston Villa, one of Martin O’Neil’s first signings, and a bit of an unknown name for most. His appearances at Aston Villa were limited due to injuries, so coming to Celtic to have a fresh start.

A stalwart in the golden era under Martin O’Neil, he more than played his part in guiding the club back to respectability, scoring 51 goals in his appearances for the club, and playing a strong role in Celtic’s campaign in the UEFA Cup 2003. He also scored the winning goal against Rangers in two separate Old Firm derby matches and seven against Rangers in all. Thompson scored the only goal in the 2005 Scottish Cup Final for Celtic against Dundee United to give the outgoing O’Neill his seventh trophy whilst in charge of the club.

Sean Fallon’s love affair with Celtic started when the son of the Celtic legend Jimmy McMenemy saved Fallon’s sister, Lilly, from drowning at Lough Gill. Fallon invited Joe McMenemy back to his house and the Scot returned the compliment by sending Sean presents of a Celtic shirt and Willy Maley’s book “The Story of the Celtic”.

He realised his ambition when he made his league debut for Celtic, away to Clyde, in the last game of the 1949–50 season. At that time, Celtic were still drawing themselves away from the doldrums which had almost saw them relegated. The following year, Sean had helped them to win The Scottish Cup in the McPhail Final against Motherwell.

Within a year he had helped the team win the Scottish Cup, beating Motherwell 1–0 in the 1951 Scottish Cup Final. In 1952 he was made Captain of Celtic. Two years later Sean would also have a cup-final goal to celebrate as he scored in the 1953 Scottish Cup Final, against Aberdeen. Sean Fallon’s performances for Celtic earned him the nickname of “The Iron Man”. He once assessed his own talents as a player by saying – “I was just an ordinary player with a big heart and a fighting spirit to recommend me.”

Petrov was signed in the summer of 1999 by John Barnes for a fee of £2.8 million. He was to be given the curious accolade of being the only good signing that came during the John Barnes era. Stan took a big step personally coming to Celtic, admitting that he knew next to nothing of the language.  Eventually, he improved his English by working in a friend’s burger van. This hard work and determination to fit in showed in his performances for the club.

In his first season, Celtic won the Scottish Premier League and both major domestic cups, and Petov was to play a large part in this. Transformed from a defensive player to an attacking central midfield role, he was to come to the fore of his game and to the notice of all the support.

As a measure of his value, Petrov was voted 2001 Scottish Premier League Young Player of the Year, despite a period out the game following breaking his leg at McDiarmid Park in March. He was back from injury by August, and was a regular starter in Celtic’s 2001/02 UEFA Champions League campaign, with Celtic retaining the league title the same year. The 04/05 season also saw Petrov becoming the third player to win the Celtic Player of The Year award. Overall, he won four Scottish Premier League titles and three Scottish Cups titles with Celtic.