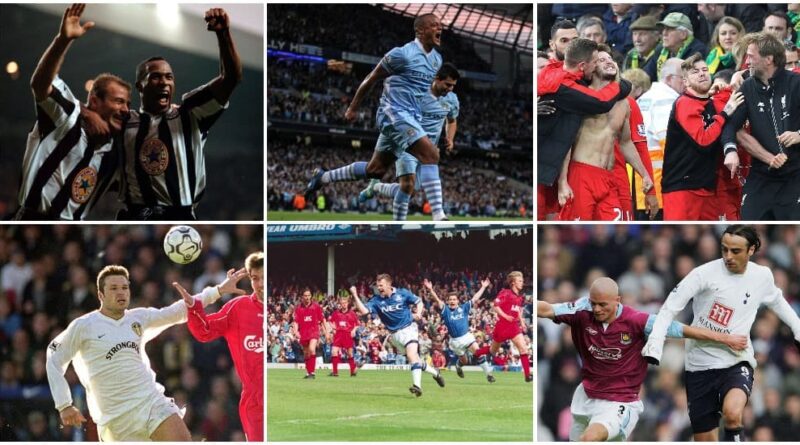 It goes without saying that Premier League is the most competitive league in the world. Many great players and managers operate in this league. This league has produced many great matches over its history. In this article, let’s have a look at some of the best Premier League matches ever.

From Sergio Aguero’s last gasp title-winning goal to Manchester United’s hammering of Arsenal, from Everton’s great escape against Wimbledon to Liverpool’s comeback against Norwich, this list has it all. Here are the 25 best Premier League matches ever.

Jamie Vardy scored a hat-trick as Leicester City inflicted a remarkable defeat on Manchester City. Despite going behind to a superb fourth-minute strike by former Foxes midfielder Riyad Mahrez, the visitors responded in stunning fashion.

Vardy levelled with a penalty before the break after he had been fouled by Kyle Walker, and he then sealed his second treble against Pep Guardiola’s side from the spot, after he had cleverly turned home Timothy Castagne’s cross to make it 2-1. Soon, Maddison made it 3-1 when he curled home a stunning fourth for Leicester.

And although Nathan Ake pulled one back with his first goal since a £40m summer move from Bournemouth, a third Leicester penalty – this time converted by Youri Tielemans because Vardy had already gone off – completed a memorable afternoon for Brendan Rodgers’ Foxes, who have started a top-flight season with three successive wins for the first time.

Having been beaten 5-0 at Newcastle the week before, Manchester United were expected to take their frustrations out on lowly Southampton, especially given the embarrassing nature of their 3-1 defeat at the Dell the previous season. But Saints stunned the football world again by going one better than the Magpies and putting six past Peter Schmeichel.

Graeme Souness’ side led 3-1 at the break, with goals from Eyal Berkovic, Matt Le Tissier and Egil Ostenstad, putting the Hampshire side in the driving seat. David May pulled one back for the Red Devils to create a nervy second half, in which United long threatened to equalise.

Berkovic and Ostenstad struck again to settle south coast nerves, however, and although Paul Scholes got another for Sir Alex Ferguson’s side, a nicely finished Gary Neville own goal rounded off the perfect day for the Saints.

Arsenal went into the match still in with a shout of the title and after 48 minutes looked on course to stay in the hunt as well leave the hosts in relegation trouble following goals from Theo Walcott and Mikael Silvestre.

But then Wigan produced a turnaround to match any in Premier League history as they boosted their hopes of avoiding relegation by coming from two goals down in the last 11 minutes to earn a 3-2 win and leave Arsenal’s title aspirations in tatters.

With 80 minutes on the clock at the DW Stadium, Roberto Martinez’s Wigan Athletic were two goals down, but from absolutely nowhere Wigan staged a remarkable resurrection as first Ben Watson restored hope after meeting Victor Moses’ cutback from the byline, and then Titus Bramble capitalised from a dreadful blunder from Lukasz Fabianski.

The drama was not done though and a minute into stoppage time, Charles N’Zogbia’s curling effort effectively ensured Wigan were safe for another year while all but ending Arsenal’s title hopes. This is, without a doubt, one of the best Premier League matches ever.

Harry Redknapp’s first official game in charge of Spurs turned out to be one of the best Premier League matches ever. Spurs came back from behind at the Emirates Stadium to earn an unlikely point.

Darren Bent pulled one back before Robin van Persie added Arsenal’s fourth – but Jermaine Jenas’s 89th-minute goal and Lennon’s tap-in in the final minute of the added time earned Spurs a point.

This Chelsea’s meeting with Spurs ultimately decided the 2015/16 title in Leicester’s favour. At half-time Spurs were looking good with goals from Harry Kane and Son Heung-min had the visitors in command.

Hazard was introduced at half-time and the west Londoners became a different side. They halved the deficit with over half an hour remaining when Gary Cahill lashed in from a corner and didn’t relinquish the bit between their teeth.

Hazard’s crowning moment came with seven minutes left. With Chelsea very much in the ascendancy their brilliant Belgian – chief among those who’d disappointed during the campaign – curled in a terrific equaliser to send Spurs heads spinning and confirm Leicester as the most unlikely of champions.

Tottenham staged a remarkable comeback from 2-0 down to defeat Arsenal 3-2, beating their north London rivals away from home for the first time in 17 years.

The Gunners led at half-time thanks to goals from Samir Nasri and Marouane Chamakh. They completely outplayed Harry Redknapp’s side in the first 45 minutes but were not ready for what was to come.

Gareth Bale got Spurs back in the tie five minutes after the restart and Rafael van der Vaart levelled the scores from the penalty spot.

Adam Lallana’s injury-time strike saw Liverpool edge a nine-goal thriller at Norwich in one of the most dramatic Premier League games of the season.

The Reds went 1-0 ahead with Roberto Firmino’s goal but Dieumerci’s Mbokani’s back heel levelled and Steven Naismith’s debut strike put the home side in front.

Wes Hoolahan added a penalty before Jordan Henderson and Firmino struck, making it 3-3. Then James Milner put the away side ahead and though Sebastien Bassong netted in added time to send Carrow Road in wild celebrations as they thought Norwich have managed to earn a point, Lallana scored in added time to win for the Reds.

One thought on “Best Premier League Matches Ever – Top 25 Games”