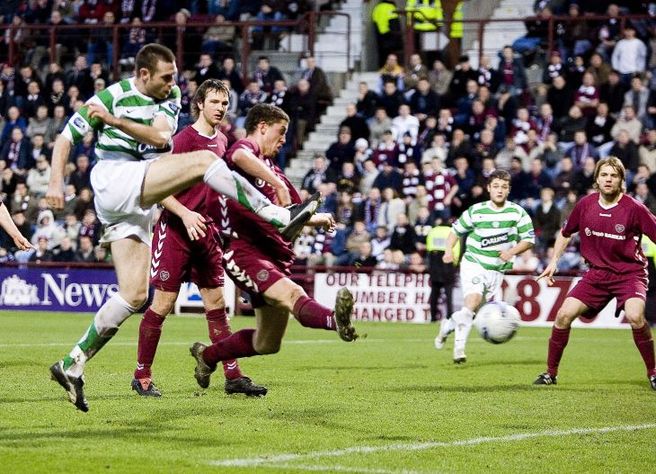 Some clubs in world sport are famous for their never say die attitude, from Manchester United’s Fergie time to Gordon Strachan’s Celtic, a team that would run harder and faster than the opposition all the way until the final whistle. In this article, we will have a look at some of the best Celtic FC comebacks ever.

Here are the 5 best Celtic FC comebacks ever-

Celtic completed a domestic treble without losing a game as Tom Rogic fired in a stoppage-time goal against Aberdeen to win the Scottish Cup.

A beautifully controlled half-volley from Jonny Hayes after nine minutes was reward for a fine Dons start.

But Celtic were level within two minutes as Stuart Armstrong was given too much time to pick out the far corner from the edge of the box.

Louis Moult scored twice – a first-time lob and a close-range volley – to put the hosts in charge.

However, Callum McGregor’s strike brought Celtic back into contention and Patrick Roberts headed them level.

Lionel Ainsworth quickly volleyed Well ahead again but that lead did not last long as Stuart Armstrong fired home to make it 3-3.

A minute from time, Rogic moved forward, picked his spot and smashed a shot past Samson to win this most gob-smacking game. It is undoubtedly one of the best Celtic FC comebacks ever.

Celtic’s character and quality in adversity was huge. Motherwell gave so much and did so many superb things, but, sickeningly for Mark McGhee and his team, they were denied the consolation of a point.

A remarkable late comeback from Celtic saw them snatch a 4-3 victory over Aberdeen. There looked to be no sign of the drama to come when Kris Commons put Celtic ahead after just 12 seconds, firing a low shot past Jamie Langfield after good work from Hooper and Anthony Stokes.

But Aberdeen weathered the storm and Celtic were made to pay for their profligacy when Scott Vernon levelled on the stroke of half-time after being fed by Josh Magennis.

Eight minutes after the break, the leaders found themselves behind after poor defending by Kelvin Wilson let in Gavin Rae and he fed Magennis (53) who tucked the ball home.

Magennis struck again on the hour to double Aberdeen’s advantage, after getting a touch on Rae’s drive, and Craig Brown’s side looked on course for a famous win in the week the 72-year-old manager announced he would be standing down at the end of the season.

But Celtic refused to lie down and Mulgrew (68) pulled one back with a deflected shot after a goalmouth scramble to give the home supporters hope.

With three minutes left, Hooper levelled after Efe Ambrose’s shot was blocked on the line and Samaras grabbed a dramatic winner in the fourth minute of injury time with an overhead kick.

Celtic stormed back from a three-goal deficit against Kilmarnock to grab a share of the spoils in a remarkable Clydesdale Bank Premier League encounter at Rugby Park.

The Hoops looked down and out as Killie raced to an astonishing interval lead through Dean Shiels, Paul Heffernan and James Fowler.

However, the second half, if anything, was even more dramatic. Celtic striker Anthony Stokes scored twice in three minutes, the first from a free-kick in the 73rd minute, before stand-in skipper Charlie Mulgrew headed an equaliser from close range and save the visitors’ blushes.

The final moments could not have been more tense and with two minutes remaining Heffernan missed a sitter with his head after he had been set up by Harkins six yards out, the Killie striker lifting the ball over the bar. 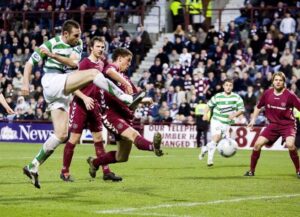 The Celtic centre-half Stephen McManus scored twice in the dying minutes of this astonishing match to send his side seven points clear at the top of league and break thousands of hearts.

Celtic came from 2-0 down to snatch a last-gasp win after Hearts’ Takis Fyssas was sent off. Hearts were 2-1 ahead at that time, with 13 minutes remaining. This compelling afternoon also saw nine yellow cards, one disallowed goal and an arrest at pitchside at the final whistle.

At half-time the Edinburgh side were 2-0 up. Calum Elliot was eye-catching time and again. He started the move for the opener, collecting the ball on halfway, losing a marker and threading a pass to Paul Hartley. Hartley crossed into the path of Edgar Jankauskas. He did not need a great contact because Ross Wallace turned the ball into his own net.

After conceding an apparent consolation goal to Stephen Pearson, Hearts were reduced to 10 men when Fyssas received a straight red for bringing down Shaun Maloney outside the box. Celtic’s manager Gordon Strachan said: “It might be that we were lucky in terms of a decision today.”

Hearts held their lead for nine minutes, until conceding a free-kick near the right-hand corner. Shunsuke Nakamura floated it in and McManus headed home. An almost identical free-kick a few minutes later fell to McManus, who turned on the six-yard box and smashed the winner.