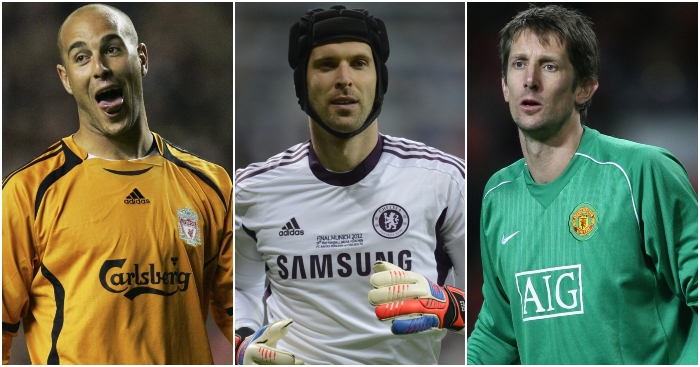 It’s somewhat befitting that the loneliest position in football is often identified as the No.1. Having said that, we can’t have a game without a goalkeeper – their importance is beyond question.

In association football, a goalkeeper may be said to “keep a clean sheet”, if they prevent their opponents from scoring any goals during an entire match. In this article, we will have a look at goalkeepers with most clean sheets in the PL history.

Most famously remembered for his time with Newcastle United, Shay Given was an incredibly good shot-stopper and one of the most consistent goalkeepers the Premier League has ever seen.

Frank Lampard appointed Given as Derby County’s goalkeeping coach last year and described the Irishman’s playing career as ‘incredible’. His 113 clean sheets in England’s top flight – basically an average of one every four games – are a testament to that.

Even more remarkable is the fact that Given managed to keep 89 of those clean sheets in a Newcastle side that only finished in the top half of the Premier League four times during his 12-year stay at the club. The Magpies would surely have been in trouble much more often without the Irishman.

Joe Hart was at the peak of his career during his time as Manchester City.

As many as 109 of Hart’s 127 Premier League clean sheets came during his trophy-laden time with Manchester City, helping the club to two league titles, two league cups and an FA Cup.

During the 2010–11 season,he won the Golden Glove for keeping the most clean sheets throughout the Premier League season. Hart replicated this feat in the 2011–12 season and was a key player during City’s title-winning campaign.

He won the Golden Glove for the third year in a row in the following season, and earned a second Premier League title in 2014. In 2015, Hart once again won the Golden Glove award for the fourth time in five years. With the arrival of Pep Guardiola in 2016, Hart was dropped for selection by the new manager and made only one appearance in the Champions League before moving on loan to Torino and West Ham United in successive seasons. He then signed a permanent transfer to Burnley after having been told he had no first team future with City.

It is very difficult to find someone who doesn’t regard Peter Schmeichel as the Premier League’s greatest goalkeeper of all time.

While the introduction of the back-pass rule may have highlighted a slight weakness with the ball at Schmeichel’s feet, the Dane was actually one of the biggest advocates of the rule change and the way it revolutionised the game. And in turn, with his trademark starfish save, Schmeichel had the same effect on the art of goalkeeping, making it a truly specialised position.

The 6ft 3in stopper was a key part of five of Sir Alex Ferguson’s Premier League title winning sides, including the treble-winners of 1999, and his overarm sling sent Manchester United on their way to many goalscoring counter attacks. And if that wasn’t enough, Schmeichel even got himself on the scoresheet during a 3-2 away defeat at Everton while playing for Aston Villa in 2001, becoming the first Premier League keeper to do so.

After struggling for form during a two-year stay with Juventus, Edwin van der Sar rocked up at Fulham in 2001 and set about restoring his reputation as one of Europe’s most consistent goalkeepers. His 127 appearances for the Cottagers did just that, as well as helping the Londoners extend their stay in the Premier League far longer than many expected. It also eventually earned a move back to the top with Manchester United.

There, Van der Sar helped the Red Devils re-assert their dominance in the Premier League, winning the title four times among a host of other honours, and the flying Dutchman was often regarded as the ‘first world-class Man United goalkeeper since Peter Schmeichel’.

With a clean sheet average of 42.17%, it’s quite hard to argue with that statement.

Howard began his career with the North Jersey Imperials, before making a move to the Metro Stars. His appearances soon attracted the attention of English Premier League club Manchester United, who signed him in 2003.

He enjoyed relative success with the club, as they won the 2003 FA Community Shield, the 2003–04 FA Cup and the 2005–06 League Cup. After United signed goalkeeper Edwin van der Sar, however, Howard went out on loan to Everton to play more first-team football, and eventually signed permanently with them in February 2007. He bagged a whopping 116 clean sheets for Everton during  his 5 years stint.

On January 4, 2012, Howard scored his first professional goal in a Premier League match against Bolton Wanderers, making him only the fourth goalkeeper to score a goal in the Premier League. In 2016 Howard made his return to MLS, signing for the Colorado Rapids.

Brad Friedel signed for Liverpool in 1997, and made little impact on the team.  It was not until his move to Blackburn in 2000 that Friedel proved his worth.

After helping Blackburn return to the Premier League in his first season, Friedel quickly showed his class.  His performances earned him praise from almost all in the game, and in 2003, he was named the Premier League player of the year after keeping 15 clean sheets.

Friedel left Blackburn for Aston Villa in 2008, where he continued to show he is one of the best goalkeepers ever to play in the Premier League.

Friedel then attracted the attention of Tottenham Hotspur. His experience and ability saw Spurs finally fill their goalkeeper spot with a solid and consistent stopper before his retirement.

Pepe Reina’s 47.02% clean sheet average is quite frankly remarkable. That’s the highest proportion of any goalkeeper with over 100 clean sheets.

It may have been helped slightly by the fact that he played under one of the best defensive managers around in Rafa Benitez, but the Spanish shot-stopper did more than enough to contribute to that stat himself.

Reina was one of the first goalkeepers in the Premier League to truly embrace playing with the ball at his feet.

His only real downside was a tendency to have the odd erratic moment, making Reina much more unpredictable than other keepers in the list. He also tailed off toward his time at Anfield.

Nigel Martyn started life in the Premier League with Crystal Palace.  He later joined Leeds United, and ended his career with Everton.

Martyn twice set records for the most expensive goalkeeper in England.  He was the first goalkeeper to be sold for a million pounds when he moved to Crystal Palace in 1989, and broke the record again with his £2.5 million move to Leeds.

At Leeds, Martyn quickly became known as one of the best goalkeepers in the Premier League, enhancing a reputation that had already earned him an England call-up.

At both Everton and Leeds Martyn was a key member of a team that surpassed all expectations; Leeds reached the semifinals of the Champions League, and Everton recorded their highest-ever Premier League finish.

The real travesty for Martyn, on a personal level, was the timing of his career.  In another generation, Martyn would have earned a lot more than 23 England caps. Yet for the bulk of his career he was kept out of the side by David Seaman.

A rock of consistency behind a water-tight Arsenal defence, David Seaman was an unbelievable goalkeeper on the pitch and an absolute gentleman off it.

Seaman helped the Gunners to two Premier League titles during his time between the sticks at Highbury and while he wasn’t the best with the ball at his feet, as was the case for ‘keepers at the time, his shot-stopping capabilities knew almost no bounds.

Seaman also exuded an air of calm behind the Arsenal back four that was only really restored when Petr Cech made the switch to north London from Chelsea.

Mark Schwarzer build a solid reputation for himself as one of the top goalkeepers in Premier League history.

He came to the nation’s attention with Middlesbrough, his incredible shot-stopping ability not only ensuring their safety in the Premier League, but eventually helping them qualify for Europe.

In fact it was a last-minute penalty save from Schwarzer that meant Middlesbrough qualified for the UEFA Cup.

Having played at Middlesbrough for 11 years, Schwarzer left and then plied his trade at Fulham, Chelsea, Leicester City.

David James was the first Liverpool goalkeeper in the Premier League, making his début for the club in their first-ever Premier League fixture.

His time at Liverpool saw him get a shaky reputation.  He became known for his mistakes as much as his great shot-stopping.

After seven years at Liverpool, James was sold to Aston Villa.  He then went on to represent West Ham United and Manchester City, before ending his days in the Premier League with Portsmouth.

James took a long time to shake off that early reputation as a mistake maker.  Yet throughout his career he was still regarded as one of the best goalkeepers in the Premier League until he left Portsmouth in 2010.

It was during his time as a veteran in Portsmouth that James really moved up in class. He had an incredible record for Portsmouth, and was a key member of their team.

Cech may have announced his retirement from playing football, but Petr Cech isn’t quite done yet having entered Chelsea’s boardroom as well as dabbling in ice hockey.

Cech was arguably at the peak of his powers during his first season with the Blues in 2004/05, breaking the record for most clean sheets (24) in a single season, while also going 10 consecutive games without conceding a goal.

However, with 443 appearances in the English top flight under his belt to date, his longevity is mightily impressive. No wonder Iker Casillas described Cech as ‘one of the best goalkeepers he has ever seen.’