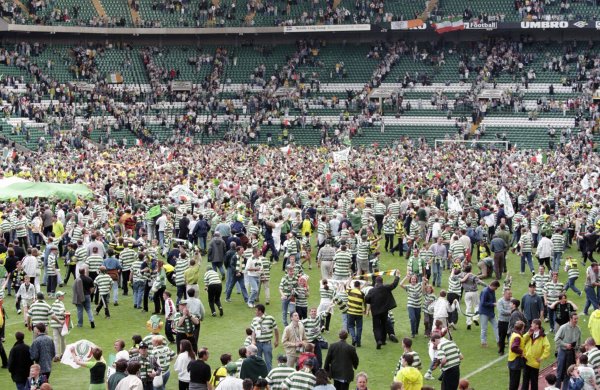 With 50 Scottish Championships and 39 Scottish Cups in their trophy cabinet, it’s fair to say that Celtic FC is a club synonymous with Scottish football. Along with their domestic successes, they were the first British club to win the European Cup, having done so in 1967. In this article, let us have a look at some of the most Iconic Moments in the history of Celtic FC.

Here are the 10 Most Iconic Moments In The History Of Celtic FC, arranged according to the timeline.

Celtic Football Club was formally constituted at a meeting in St. Mary’s church hall in East Rose Street , Calton, Glasgow, by Irish Marist Brother Walfrid on 6 November 1887, with the purpose of fundraising for the “Poor Children’s Dinner Table” charity. A year later, the club played its first official match against Rangers, thus setting the stage for a rivalry based as much on the clubs’ political and religious differences than on their on-field disputes. For the first couple of decades.

Celtic won the first of their 50 League titles in 1893. It was the start of many successful eras that the club was going to see.

Celtic became a private limited liability company, and Willie Maley was appointed secretary-manager. He won the Scottish League championship for the club in his first full season as manager. Celtic had been a buying club in their opening decade, spending heavily to bring professionals to the club. Maley decided to scrap that and rely almost entirely on recruiting youngsters fresh from junior football. Maley created a young team who won six consecutive league titles in a row between 1905 and 1910 and won the first Scottish League and Scottish Cup doubles. They were the best team in Glasgow, and the six-in-a-row record remained unbroken until the 1960s. As his six-in-a-row team began to age, Maley set about the task of building a younger team. This younger side, which included Patsy Gallacher and the apparently ‘ageless’ Jimmy McMenemy, would win four league titles in succession between 1914 and 1917. They also set a then UK record for an unbeaten run in 62 professional football matches.

Rangers were the reigning league champions, and the hot favourites to beat Celtic, who were in the middle of the leanest spell in their history, having only won four trophies since 1938. The match was the 12th League Cup Final, and the first contested by the Old Firm. However , Celtic were on the top of their game that day and thrashed Rangers 7-1.

Checkout the details of the game here

Jock Stein was appointed as Celtic’s manager in March 1965, becoming the club’s first Protestant manager. Under him, Celtic went on to witness their most successful era and began their reign of dominance.

Celtic complete their most glorious season by winning every competition entered: Scottish League, Scottish Cup, League Cup, Glasgow Cup and the European Cup. The climax of the season was the 2-1 victory over Inter Milan in the European Cup final played at the Estadio Nacional in Lisbon on May 25, 1967. Celtic thus become the first British (and non-Latin) club to win Europe’s most coveted trophy.

Among Celtic’s many and varied triumphs there are few as noteworthy as the amazing charge to claim nine league championships in succession. This run of league triumphs would begin in season 1965-66 and end in 1973-74. A near decade of glory. The arrival of Jock Stein as manager in 1965 was of course the catalyst for this remarkable dominance of the domestic game.

Billy McNeill guides Celtic to the championship in his first season as manager. The title was gained in truly dramatic fashion at Celtic Park with a 4-2 win over Rangers in the club’s final match. Celtic put together a late run of wins to take the destiny of the title to the final match of the season- at home to Rangers . Despite a red card for John Doyle , McNeill’s side refused to accept defeat, scoring four in the second half in a win that many compared to the drama of Lisbon.

The Celtic side that won the league in 1998 are known as the men who stopped 10-in-a-row, their success ending a period of Rangers domination just as it seemed set to eclipse the title run of Jock Stein’s legendary Celtic sides of the 1960s and 1970s.

The title race went down to the wire, with Celtic starting the day only two points ahead of Old Firm rivals Rangers, who were playing at Dundee United.  A Rangers win, combined with a draw for Celtic, would hand ‘Gers their tenth consecutive league title. However, Celtic scored once in each half to win the game and the title.

The season continued to be a momentous one for Celtic as they secured the club’s fourth ever domestic treble, winning the Premiership title by a considerable distance and clinching the Scottish Cup with a last-minute Tom Rogic winner, with Aberdeen again the runners-up. Not only was it a treble triumph, but it was achieved as Invincibles, with the Hoops going through the entire domestic campaign unbeaten. In the 2017/18 season, Celtic once again reached the group stages of the Champions League and retained the League Cup, while they also set a new British record of 69 domestic games unbeaten.