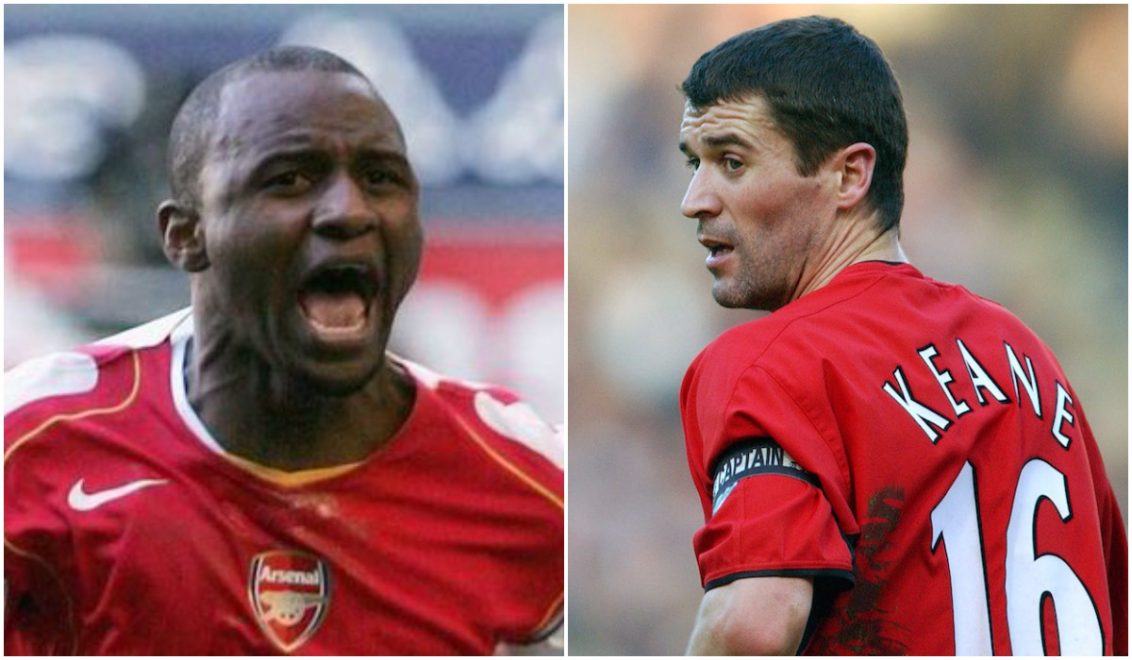 Here is our ‘ Top Player Rivalries Of All Time ‘.

These two were the one of the finest players of their generation.And people were looking forward for their meeting on a football pitch.The time did come,the year was 1974. The scene was the FIFA World Cup final.

Despite the Dutch coming out strong with an early goal, the Germans would eventually win the final 2-1.And, it was great to see the respect both these players had for each other and it was also unusual to witness such admirable attitude.

Beckenbauer once said that ‘Cruyff was the better player, but I won the World Cup’.

These two were international teammates but make it to this list beacuse of their club rivalries.Two men who have become symbols of the teams they’ve served for nearly two decades. Del Piero at Juventus and Francesco Totti at Roma. Both men hold the records for appearances and goals scored for their respective teams. Fans of those two clubs will argue about which player is better until the end of time.

These two played for rival clubs in two countries.In the early 2000’s when these two majestic strikers were in their prime, perhaps the deadliest strikers in the game. Van Nistelrooy playing with Manchester United and Thierry Henry with Arsenal, both were competing for the English Premier League title year after year, pushed by each other’s success and race to earning the goal scoring title.

In their time in the Premier League, Henry had 130 goals to Van Nistelrooy’s 95, with 21 more games played. It was during these years that the race to the title always seemed to come down to Arsenal or the Red Devils. The two made the move to the Spanish League just a year apart, and once again on rival teams, Van Nistelrooy heading to Madrid while Henry tested his skills with an unstoppable Barca squad.

This rivalry was down to 2 players fighting for 1 place.Lehmann was long Kahn’s understudy for the German national team. And this was fine with everyone because Kahn was outstanding, especially at the 2002 World Cup, where he captained the team to second place. But when Juergen Klinsmann took over as Germany coach in 2004, he relieved Kahn of the Captain’s armband and announced that Kahn and Lehmann would be competing for the #1 jersey when Germany hosted World Cup 2006. Kahn was not amused.

The two men sniped as they passed the jersey back and forth, with Lehmann eventually emerging victorious by a narrow margin. There was brief harmony during the World Cup when Lehmann famously won a penalty shootout for Germany, and praise from Kahn, and a nice moment when Kahn played for the final time and captained the team in the third place playoff. But verbal hostilities resumed soon after World Cup 2006 with Lehmann saying Kahn takes himself far too seriously and Kahn mocking Lehmann for losing his Arsenal shirt to Manuel Almunia.

Liverpool and Manchester United’s hatred for each other was taken to another level when Luis Suarez racially abused Patrice Evra during his time in Epl. The Uruguayan was banned for eight games, only to return and refuse to shake Evra’s hand the next time the teams met.

Another refused handshake, this time by Wayne Bridge on John Terry. The Chelsea skipper had a four-month affair with team-mate and friend Bridge’s girlfriend Vanessa Perroncel; Bridge later went on to quit international football over the scandal and was sold by Chelsea.

These two shared what was perhaps the most compelling rivalry of the late 90’s and early 2000’s in world football. Vieira was the skipper for Arsenal and Keane for Manchester United.

When two competitors like this square-up, you know it’s going to get tasty, with battles on the pitch, fights in the tunnel, and Keane’s legendary line of pre-match questioning: “If you love Senegal so much, why don’t you go play for them?”

These two players may just be the two best soccer players to have ever played the game. Although the two did not play in the same generation, their rivalry has sparked much debate, mainly over who was the greatest player of all time. Of course, it doesn’t help that Pele was Brazilian and Maradona was Argentinean, two countries that are intense rivals on the international scene. Although Pele has won an astonishing three FIFA World Cups with Brazil as opposed to Maradona’s one, it’s important to note that Pele was playing for one of the greatest soccer teams of all time, whereas Maradona had to carry a mediocre Argentine team to glory.

Pele once said that Maradona is a bad example to kids due to his drug abuse, while Maradona claimed that Pele didn’t want the World Cup to come to  Africa. Other moments of note include the Argentine declaring that Pele  lost his virginity to a man, while Pele once let slip that it’s all a
big charade and Maradona “loves” him.

Maradona reignited the rivalry in June 2012 by saying: “they need to change the medicine they are giving the idiot.”

One could call this the Messi and Ronaldo rivalry of the early 2000’s. The two played for Barcelona and Real Madrid and were considered playmaking legends.

Zidane played with a simplicity so unique and so effective that not one person can match him in his prime. Ronaldinho, on the other hand, is a god on the pitch, with an understanding of the game that runs so deep, it makes him very had to compare.

Have you ever seen a more mesmerizing rivalry than Cristiano Ronaldo and Lionel Messi? Can it be anymore spectacular that what it’s already been? Not only are the two competing for the Ballon d’Or every single year, the two also play on teams that have arguably the greatest and grandest rivalry in the history of sports. Since Ronaldo’s move to Madrid, Messi and Ronaldo’s stats have been alarmingly close,though Messi has more individual and team honours to his name when compared to Ronaldo.

They will come face to face (injury and suspension permitting) at least twice a year.Both are making an argument to be the greatest in the world, and will continue to do so until they hang their cleats in modest retirement. Now you may have your opinions as we all do, but whether it’s Ronaldo or Messi you prefer, realize that you are living in an era where the two greatest players in the world are going head to head as foes. All we need to do is enjoy the show.