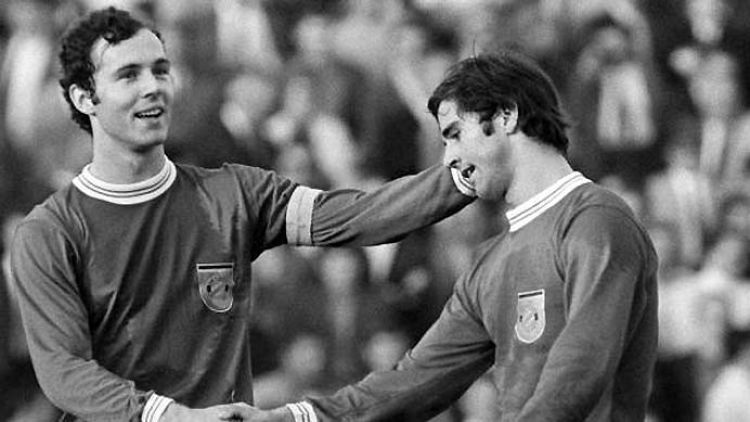 Bundesliga has a long and rich history, in which many great players played in the league. Among all those great legends, today we will have a look at some of the best Bundesliga players ever!

Taking into consideration major aspects like performance, longevity and impact on the league, here are the top 10 best Bundesliga players ever.

Klose is a great player known for his heading skills and he is currently the all-time top scorer of the German national team with 71 goals. Starting his career at FC 08 Homburg, he played in the Bundesliga for Kaiserslautern, Werder Bremen and Bayern Munich. He won two league titles with Bayern, along with cup competitions at Bayern and Werder Bremen.

Neuer is regarded by pundits as the best goalkeeper in the world and as one of the most complete goalkeepers of all-time. He won IFFHS World’s Best Goalkeeper award for four consecutive years since 2013.

Neuer has been described as a “sweeper-keeper” because of his unique playing style and speed when rushing off his line to anticipate opponents.He is also known for his quick reflexes, excellent shot-stopping abilities, strength, long throwing range, command of his area and accurate control and distribution of the ball.

Neuer made his Bundesliga debut with Schalke in 2006 and kept playing for them until 2011, when he was signed by Bayern Munich. He has won seven Bundesliga titles, a Champions League among a list of other honours with Bayern Munich. He also won the 2014 FIFA World Cup with Germany as well as the Golden Glove award for being the best goalkeeper in the tournament.

Karl-Heinz Rummenigge joined Bayern Munich in 1974, coming from the Westphalian amateur side Borussia Lippstadt, for a transfer fee of ca. €10,000. He immediately showed great strength as a dribbler. His striking qualities were initially insignificant, but would find great improvement in later years, particularly after the arrival of coach Pal Csernai in 1979. In 1979–80, he scored 26 goals and became for the first time the Bundesliga’s top striker, a feat he repeated in 1981 and 1984 with 29 and 26 goals, respectively.

With Bayern Munich he won the Intercontinental Cup, the European Cup, as well as two league titles and two domestic cups. He was also honoured twice as European Footballer of the Year.

Born in Metten, Bavaria, Maier spent his entire professional career at Bayern Munich. He began playing for Bayern’s youth sides in 1958. During the 1970s, he was part of the legendary Bayern team which included the likes of Franz Beckenbauer and Gerd Müller and won three European Cups in a row, a German record. Between 1966 and 1979 he played in 442 consecutive Bundesliga matches, still a German national record.

He won the Bundesliga 5 times and also the World Cup in 1974.

A versatile and complete player, Matthäus was renowned for his perceptive passing, positional sense, well-timed tackling, as well as powerful shooting. During his career, he usually played as a box-to-box midfielder.He was named European Footballer of the Year in 1990. In 1991, he was named the first ever FIFA World Player of the Year, and remains the only German to have received the award.

In Bundesliga he played with Borussia Mönchengladbach and Bayern Munich. He won 7 league titles with Bayern Munich and three DFB Pokal titles. One of the best Bundesliga players ever, without any doubt.

He started his career in the Karlsruher SC Junior team in 1975. Twelve years later, Kahn made his debut match in the professional squad. In 1994, he was transferred to Bayern Munich, where he played until the end of his career in 2008.

His tall figure always made Bayern Munich’s defense look much more difficult to penetrate. He also holds the record as the third most-capped player ever in the German League, with a record of 557 appearances. He won eight Bundesliga titles, six DFB Pokal titles,and one Champions League trophy for Bayern Munich.

He was also a furious character on the pitch. He even had bust ups with his teammates.

Jupp Heynckes is the third top scorer in Bundesliga history, with a total of 220 goals in 394 appearances. The prolific striker was also a part Mönchengladbach golden generation in the 1970s period, where he was able to win four Bundesliga titles, one UEFA Cup title, and a DFB Pokal trophy.

After retiring as a player, Heynckes decided to pursue a career as a coach.His highest point of coaching career came with Bayern Munich ,where he won the treble in 2013.

Seeler was a gifted, powerful, and prolific striker who, among other things, was most of all renowned for his leadership, consistency, overhead kicks, and aerial ability.

Uwe Seelar spent his entire career with Hamburger SV,from 1953 to 1972. He scored 404 goals in 476 league games for the club. He is undoubtedlt, one of the best Bundesliga players ever.

Beckenbauer is widely regarded to be one of the greatest players in the history of the sport. A versatile player who started out as a midfielder, Beckenbauer made his name as a central defender. He is often credited as having invented the role of the modern sweeper or libero.

Twice named European Footballer of the Year, Beckenbauer appeared 103 times for West Germany and played in three FIFA World Cups. He is one of only two men, along with Brazil’s Mário Zagallo, to have won the World Cup as a player and as a manager; he lifted the World Cup trophy as captain in 1974, and repeated the feat as a manager in 1990. He was the first captain to lift the World Cup and European Championship at international level and the European Cup at club level.

A prolific striker renowned for his clinical finishing, especially in and around the six-yard box, he is regarded as one of the greatest goalscorers of all time.He scored 365 goals in 427 league games for Bayern Munich winning 4 League titles and 4 DFB Pokals.

Müller was named European Footballer of the Year in 1970. After a successful season at Bayern Munich, he scored 10 goals at the 1970 World Cup for West Germany where he received the Golden Boot as top goalscorer. He scored four goals in the 1974 World Cup, including the winning goal in the final.

One thought on “Best Bundesliga Players Ever – Top 10 Legends”