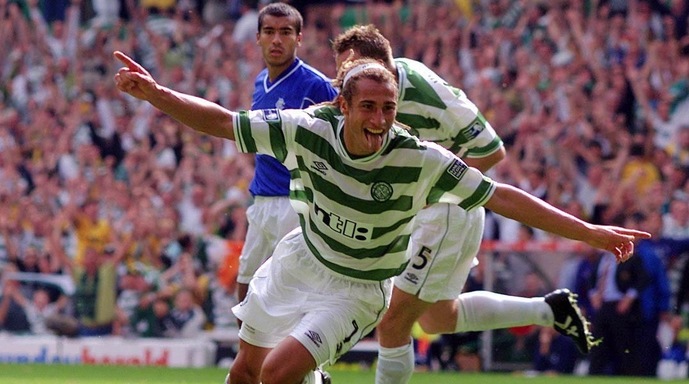 In our series of ‘Old Firm Classics’ we are looking at some of the best matches played between Celtic and Rangers. In our earlier article we had a look on the 1957 League Cup final ,which Celtic won 7-1 and in this article we are going to revisit another memorable Celtic victory from 2000.

The importance of this game cannot be overstated. Rangers were in the ascendency having comfortably won the league the previous season and spent a massive sum on transfers on top of it all. Before the start of the season, the Huns genuinely believed they were to enter the next phase of domination both at home and in Europe . In truth, few Celtic fans saw any hope of overhauling them but the club was beginning to regroup after a couple of disastrous years under the previous team managers.

Martin O’Neill could hardly have asked for a better beginning to his Celtic career as the Parkhead side thrashed their opponents in the ‘demolition derby’.

A reality not a dream, a glorious exhibition of football which really shook the game in Scotland to its core. A breathtaking Old Firm derby finally lived up to the hype which perpetually surrounds this fixture. Eight goals and one red card tells you some part of the story.

Even by the standards of Old Firm matches, this one got off to an astonishing start. Three goals in an 11-minute period sent the Celtic fans into delirium as Rangers’ defence, and Fernando Ricksen in particular, was torn apart. Chris Sutton, Stiliyan Petrov and Paul Lambert scored the goals.

The game rarely slowed from the furious pace of the opening 15 minutes, with Celtic allowing Rangers no time to settle in the middle of the park.

The commitment of both sides was underlined by a heavy collision between McCann and Lambert which saw the Celtic man stretchered off midway through the first half, an injury which caused him to be replaced shortly afterwards. It was in the 40th minute when Claudio Reyna pulled a goal back for Rangers.

As usual in Old Firm games, there were a number of contentious decisions by the match officials.

Chris Sutton looked offside when he scored the opening goal, Rangers’ first goal by Claudio Reyna may or may not have crossed the line, while Rangers were denied a second when Wallace’s wonderfully timed run and shot beyond Gould was wrongly called offside by the flag of the assistant referee.

Advocaat, who stood solemnly and staring straight ahead at the end while his players trudged off the pitch, knows he has a great deal of work ahead of him.

Barry Ferguson was dismissed seven minutes from time after slapping the ball away in a fit of temper and Rangers had Claudio Reyna, Billy Dodds and Neil McCann booked although referee Stuart Dougal was too harsh on the two strikers.

It took the genius of Henrik Larsson to really put the game beyond Rangers with two goals to mark his return to the fixture. He added No.4 after the break and Billy Dodds converted a penalty to reduce the deficit but Larsson’s header and Sutton’s tap-in sealed it.

Checkout : 10 Players Who Played For Both Rangers And Celtic