City fans have already turned out to be huge admirers of Danilo and showed their love for the Brazilian with a song.

Throughout the history of the beautiful game, changing clubs have done wonders for many players. Turned out to be a flop at one club, many players rose to stardom after decided to ply their trade elsewhere.

It’s too early to predict but Danilo’s £26.5m move from Real Madrid, where he was booed by a certain part of Los Blancos fans, to Manchester City seems to work out quite well for the 26-year-old Brazilian till now. 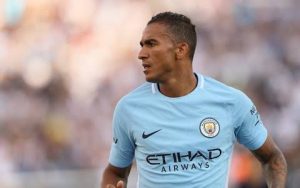 Although a right-back, Danilo has already played as left-back, defensive midfielder and centre-back too, giving Guardiola a host of options where he can deploy the versatile Brazilian. Danilo has made only 4 starts for City but also stepped up as substitute in many matches. He seems to have coped up quite well with the physicality that Premier League demands.

While many people raised eyebrows when City splashed £26.5m for a player Real Madrid fans termed a flop, he has won the hearts of all Sky Blue fans since the move.

Now, Manchester City fans have showed their love towards Danilo with a new song.
Tom Heenan, a member of the Manchester City Eccles Supporters Branch, created the song. It is sung to the tune of Status Quo – Rockin’ All Over The World. James Dobbie (@jdobz7) posted it on Twitter.

City fans can listen to the song here –