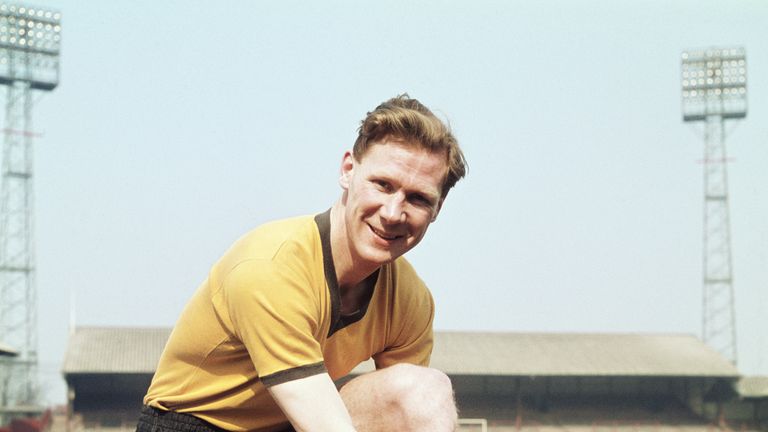 Wolverhampton Wanderers is one of the biggest football clubs in England. Wolves were one of the founding members of the Football League in 1888. They have won the English League title three times and the FA Cup four times. Many great players have played for the club in its rich history. Let us have a look at some of the greatest Wolverhampton players ever.

Considering important factors like consistency, longevity, skills, impact on the club, and match-winning performances, here are the 10 greatest Wolverhampton players ever. These Wolves legends have left an everlasting impression on the minds of the fans and the Wolverhampton Wanderers football club.

Ron was an attacking wing-half and played in well over 500 games for Wolves, scoring 32 times.  He spent 15 years as a professional at Molineux and scored 37 goals in 512 games before joining Northampton Town in September 1967.

Jimmy Mullen spent his whole career playing for Wolves between 1937 and 1960. He became the youngest player ever to appear for Wolves in a first-team match. Mullen was just 16 years and 43 days old when he played in the 4-1 win over Leeds Utd in February 1939.

He helped Wolves to win league titles in 1954, 1958, and 1959 respectively, while he also picked up runners-up medals on three occasions. He also started in the 1949 FA Cup triumph over Leicester City.

Mullen also represented his country in the 1950 and 1954 World Cup. His tally for the Three Lions would finish at six goals in 12 matches. As for Wolves, he scored 112 goals in 486 appearances. He is among the greatest Wolverhampton players ever.

Derek Parkin is the club’s all-time record appearance maker. He would feature in that backline after playing over 600 matches between 1968 and 1982.

Wolves spent £80,000 to sign him from Huddersfield Town and they made sure he was worth every penny as he became an ever-present in all competitions during his first two years at Molineux.  He made 35 appearances more than second-place Kenny Hibbitt. He is undoubted, one of the greatest Wolverhampton players of all time.

One of the greatest Wolves legends, Kenny Hibbitt was a goal-scoring midfielder with an eye for goal. He joined in November 1968 for just £5,000 from Bradford Park Avenue. He spent 16 years with Wolves from 1968-1984 when he departed for Coventry City.

Hibbitt enjoyed an excellent record of 114 goals in 570 appearances for Wolves. He won two League Cup Winners medals in 1974 and 1980 and also helped Wolves win promotion from the Second Division in 1977 and 1983.

John Richards was a gentleman on and off the pitch and not just a great goalscorer, but a scorer of great goals too. He is well remembered for a wonderful partnership with Derek Dougan for the majority of the 1970s. His record of 194 goals was a record that few would think would ever be beaten until Steve Bull came along.

King John really is one of the all-time Wolves legends, winning two League Cups, a UEFA Cup runner-up medal, and a Second Division title, to boot. Undoubtedly, he is among the greatest Wolverhampton players ever.