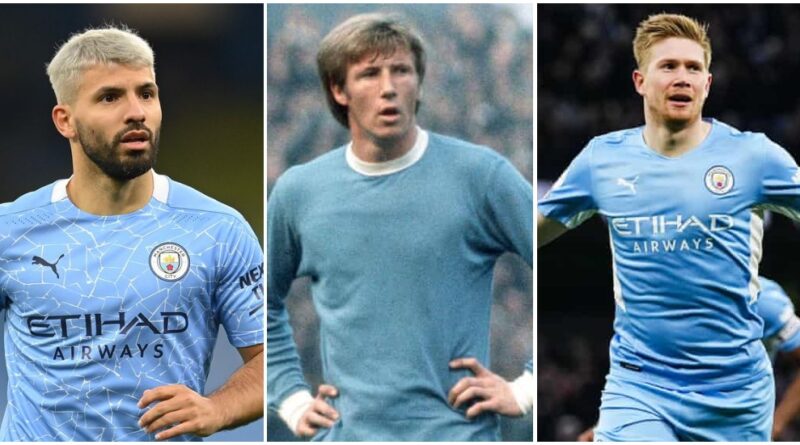 Manchester City is one of the biggest and most followed clubs from England. They are currently one of the best teams in Europe and boast a star-studded squad. Since their takeover by Abu Dhabi group in 2008, the club has brought in some of the biggest names of the game. However, even before that, many great players plied their trade for The Citizens. In this article, we have tried to put together Manchester City greatest XI of all time.

Here is the greatest Manchester City XI ever.

Whenever we think about Manchester City’s greatest goalkeeper, the first name that pops up in our mind is Bert Trautmann. From prisoner of war to City legend, his rise to stardom was a remarkable one.

The club’s decision to sign a former Axis paratrooper sparked protests and 20,000 people attended a demonstration against his signing. But so outstanding were his performances that he won over fans who initially protested against his arrival at Maine Road.

In 1956, he helped City to the FA Cup in the defining moment of his career. City beat Birmingham 3-1 in the final, but Trautmann injured himself following a collision with Peter Murphy in the 75th minute. He played on, though in pain, with pictures showing him clutching his ‘stiff neck’ at the end of the match. X-rays later showed that he had broken it. He was named Footballer of the Year that same season – becoming the first foreigner to win the award. Trautmann played for Manchester City until 1964, making 545 appearances.

Better known as ‘Skip’, Book joined City from Plymouth Argyle in 1966 for a fee of £17,000. Despite Book being almost 32 years old and never having played in the top flight, he was one of the finest defenders in the country. All this from a player who had just two years earlier been playing for non-league football with Bath City and bricklaying part-time.

He was an inspiration as they edged United to the title in 1968. He suffered a career-threatening Achilles injury at the start of the following season but returned to lead City to triumph in the FA Cup over Leicester, being voted joint Football of the Year with Dave Mackay – despite missing half of the season.

Allison said Book was one of the best defenders he’s ever seen and few who saw him play would disagree with that view. Tony captained City to many trophies, including the European Cup-Winners’ Cup, before retiring in 1974.

A modern-day hero, Vincent Kompany was the backbone of the City defence in their recent success. Kompany was signed by Mark Hughes in 2008. Robust, intimidating and rapid, Kompany has determinedly led the club into a new era.

He headed home the only goal in a crunch derby against Manchester United towards the end of the 2012 season and after lifting the club’s first Premier League title that year, he would lift three more along with six other major honours before leaving in 2019 at the end of his 10th season.

He has been so integral to the club’s recent successes he has become a genuine club legend. In his final season, he scored a worldie of a game-winning goal vs. Leicester City at the tail-end of the 2018-19 season, keeping Man City ahead of Liverpool in the title race.

His injuries hampered him in later years but he has done more than enough to earn a place among the greatest Manchester City XI of all time.

Mike Doyle was one of many homegrown players who reached their full potential following the arrival of Joe Mercer and Malcolm Allison in the summer of 1965. Having signed originally as an apprentice in May 1962, the former Stockport Boy played primarily at centre-back although when the need arose he was more than capable of turning out at full-back.

At club level, he played 448 league games for Manchester City, scoring 32 goals and was voted as the club’s hardest player in the club’s official magazine. He scored for City in the 1970 League Cup Final win over West Bromwich Albion and captained the side in the 1976 League Cup Final.

Manchester-born Paul Power was a versatile left-hand sided player who went on to become one of the most popular players ever to play for Manchester City. He had been a City fan since he was a boy and originally signed for the club as an amateur in August 1973.

He was a versatile player who could play both in defence and midfield and played for Manchester City till 1986. During his time at Maine Road, he was named player of the year in both the 1980-81 season and in the 1984-85 season. He played in 447 games for the team scoring 36 goals before transferring to Everton.