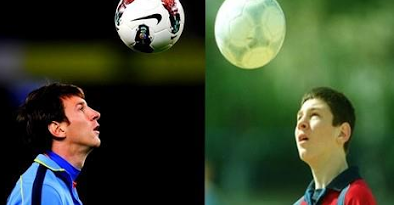 Not every footballers were born with silver spoon in their mouth.There are many footballers who were born in extreme poverty but fought their way up to success.These footballers are inspiration to millions around to the world who dream of doing the same.Today we will have a look at early life struggles of some famous footballers.

There are so many footballers who struggled in their early life,but we could only include 10 in our list of ‘early life struggles of some famous footballers’.

Adriano who was once one of world football’s most brilliant strikers, before inconsistency and personal troubles brought his career to its knees.Adriano’s rise from miserable poverty is as much inspiring as incredible. Born in Brazil’s Rio de Janeiro and raised in Vila Cruzeiro – a notorious neighborhood that made the headlines when journalist Tim Lopes was cruelly murdered in 2002 by drug lords.

He once said, “When you’re small, you dream of having a big car. Your mother is the most important person in your life, and you dream of giving her a big house. And you see the top footballers with beautiful and glamorous women.” Only, in the subsequent years Adriano got more of such luxuries but he could never fulfill the talent he was gifted with.

Born into the harsh reality of Bari Vecchia – a troubled neighborhood in the Puglian city – Cassano’s father abandoned the family before his son was old enough to even know what had happened. Life was difficult thereafter, with the boy’s mother struggling to support the family. It was in the streets that Cassano was first noticed by a Bari scout, who plucked him up, simultaneously discovering one of Italy’s greatest young talents. Cassano has since admitted that a life of crime likely awaited him had he not been found

Cassano wrote in his autobiography, “I spent the first 17 years of my life dirt-poor. Then I spent nine years living the life of a millionaire. That means I need another eight years living the way I do now and then I’ll be even.”

Unlike most of the footballers in this list,Messi’s early struggle was with a disease.At the age of 11, Messi was diagnosed with growth hormone deficiency (GHD). This was a condition that stunted growth and required expensive medical treatment, including the use of the drug Human growth hormone.

Local club, River Plate were interested in signing Messi but didn’t want to pay for his medical treatment.So, at the age of 13, when Messi was offered the chance to train at soccer powerhouse FC Barcelona’s youth academy, La Masia, and have his medical bills covered by the team, Messi’s family picked up and moved across the Atlantic to make a new home in Spain.

Checkout his position in our list of best Barcelona players ever.

Pelé,who won three World Cups, two World Club Championships and nine Sao Paulo State Championships was born on October 23, 1940, in Tres Coracoes, Brazil.He was the son of a minor league soccer player. Pelé grew up in an extremely poor neighborhood, where one of the only sources of entertainment for a poor boy was to play football, barefoot and with a makeshift ball.

Pele himself worked as shoe polisher when he was seven.Pelé was coached by his father and the hard work soon paid off, for when he was eleven Pelé played for his first team, that of the town of Bauru, Brazil. He moved up in competition with outstanding play and soon was one of the best players on the team. At the age of fifteen his mentor, Waldemar de Brito, brought him to Sao Paulo to try out for the major league teams. Pelé was quickly rejected. De Brito then took Pelé to Santos where he earned a spot on the team.

And the rest, as they say,is history!

Diego Armando Maradona had to share one room with seven siblings. Deprived of education and life’s taken-for-granted comforts, El Diego had a severely difficult childhood.

For him football was the only comfort in his life; shirtless and barefoot, the little kid was blessed with a magical left foot that he used to frightening extent to sear his way through the footballing forest to become arguably the greatest ever footballer in the world.

Suarez Sr abandoned the family when he was just a boy and Luis subsequently had to sweep the streets to help pay the bills.

The middle of seven children, born to mother Sandra and father Rodolfo, it was not until Suarez was seven that his family arrived in Montevideo.

There, amid the high rises and the pollution, life was tough. Money was tight, poverty a looming presence. Suarez remembers being unable to attend one practice match because he did not have shoes to wear.

“We were from the lower class,” he remembers. “I never had the possibility to choose my own running shoes, for example, because of how big my family was.

“My parents did everything they could but they couldn’t buy us the things that we wanted, only what they could provide. But I was forever grateful for what they provided.”

He finds a place in our list of greatest Liverpool players ever.

Agüero was born in Quilmes, Buenos Aires on 2 June 1988 into a large family with seven children. His mother, Adriana, was a housewife, and his father, Leonel, was a taxi driver.His family was poor. There were days when dinner was maté, an herbal tea, and stale bread.

The 28-year-old cannot remember a time when football was not part of his life. “Football surrounds you in Argentina,” he said. “I always had the ball at my feet. At any moment of the day we’d be playing, in the sun or after dark. I’d spend hours and hours out there, sometimes even coming home late. Time was never a factor.”

When he was nine, he joined Independiente and then his football career took off.He is included among the greatest players to have played for Manchester City.

Born into challenging circumstances in Porto Alegre, the Moreira family were plunged into catastrophe when Ronaldinho’s father suddenly died after suffering a fatal heart attack in a swimming pool.

It was Ronnie’s football skills that turned things around as first club Gremio moved the clan into an upmarket suburb as a way of convincing him and his brother to stay with the club.

He made it into the first team in 1997 and was being heralded as one of the best young hopes in Brazilan football. Meanwhile, he was already making the breakthrough with the national squad, and his six goals were fundamental in Brazil’s Copa America triumph in 1999.

From there he never looked back.

Growing up in Brazil’s northeast port town of Recife, he lived in one of its favelas — the Brazilian name for slums.Poverty meant he lost several teeth and malnourishment left him bowlegged.

He was from a background so poor that he walked a 15-mile round trip to training as a youngster.It was the love of the game that kept him going.

His father was killed in a road accident in 1989 but that didn’t stop Rivaldo from making it big in football. The rest, as they say, is history.

The Brazilian legend became the 1999 European Footballer of the Year and went onto win the World Cup with Brazil in 2002.

Carlos Tevez was born in Fuerte Apache, a small neighbourhood  located in Buenos Aires. It wasn’t the most pleasant area to live in, a town where violence and drugs, as well as a high crime rate, all in some way connected to its poverty, made it one of the most dangerous places to live in Argentina.

“There were tough times, growing up in Fuerte Apache,” Tevez said. “When it was dark and you looked out of the window, what you saw would scare anyone. After a certain hour you couldn’t go into the street. It was incredible.”

Yet a severely deprived childhood couldn’t eclipse Tevez’s footballing talent and the Argentine went onto become one of the finest strikers in South America, earning a move to England’s West Ham United, whom he almost single-handedly saved from relegation from the Premier League.From there he played for several clubs and is now the highest earning footballer in the world after moving to China.