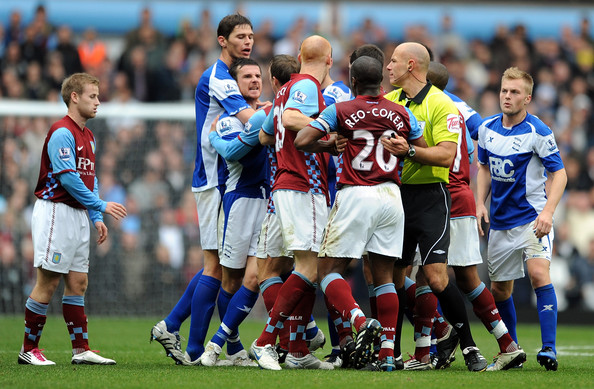 Football wouldn’t be half as fun without rivalries. Britain is home to some of the most fierce rivalries in the world. Some of these matches are so intense that they are not just played on the pitch but also off it. In this article, we will be having a look at some of the biggest rivals of Aston Villa.

Considering the atmosphere, fans’ opinions, ticket sales, social media buzz, and the history between the clubs, here are the five biggest rivals of Aston Villa.

Aston Villa and Leicester City are considered Coventry City’s biggest traditional rivals. However, in recent years, it can be argued that Coventry sports fans have had to work hard to find a “true” rival, with the Birmingham region falling back on its traditional geographical rivalries rather than their neighbors down the A45.

In a recent survey, Coventry fans voted Aston Villa as their biggest rivals ahead of Leicester City. In the same survey, Villa fans rated Coventry as only the fifth-biggest rival.

The 1936-37 season marked the first time Coventry met with local-rivals Aston Villa in league football, and the result was a 0-0 draw.

So far, the clubs have met 59 times with Villa winning 32 compared to Coventry City’s 10.

They are not really rivals, but the Red Devils had some brilliant battles with Villa in the 90s. In the above-mentioned survey, Villa fans rated Manchester United as their fourth most hated team. These give us enough reason to put Manchester United as one of the biggest rivals of Aston Villa. However, Manchester United fans did not rate Villa among their top 5 rivals.

The first game between the teams was played on 19 Nov 1892, in which United (then Newton Health) won the game 2-0. Till now, the clubs have met 187 times in professional matches and Villa have won 49 matches compared to United’s 98.

Wolves consider Aston Villa as their second-biggest rivals after West Brom. While Villa considers Wolves as their third biggest rivals. So, it is not difficult to understand that there is some tension between these two.

It is one which could well become more heightened in the coming years, with both clubs harboring the same ambitions and facing some common problems in how precisely to achieve them.

Villa are obviously several steps behind Wolves, who needed only one campaign back in the top flight to break into European competition. But ultimately, the desired destination remains the same and both clubs know they will likely have to tread a similar path in order to reach it.

With both the clubs from the West Midlands region, expect this game to grow in stature. The first game between these two was played on 11 Dec 1886 and it ended 2-2. In the 128 games played between the two, Aston Villa has won 55, while Wolves has won 41.

Aston Villa vs West Brom is one of the biggest West Midlands derbies. While the younger generation typically tends to save their most abusive language for Birmingham City and Wolverhampton Wanderers, there’s still a section of supporters who see this as THE big West Midlands derby.

Their stadiums, Villa Park and The Hawthorns respectively, are four miles away from each other. Both clubs have bigger rivals—Birmingham City for the former in the Second City derby, and Wolverhampton Wanderers for the latter in the Black Country derby.

However, the supporters of both the clubs rate each other as their second-biggest rivals. The atmosphere always gets tense whenever a game between these two is played.

A 2010 article in The Daily Telegraph ranked the rivalry between Aston Villa and West Bromwich Albion as the third most fierce in the region, behind the two aforementioned derbies.

The first game between these two was played in Jan 1885, which finished 0-0. Both the clubs have met 145 times, with Villa winning 68 compared to West Brom’s 47.

There’s no surprise that Birmingham City is on top of this list. The rivalry between them is known as the Second City Derby based on Birmingham being referred to as the second city of the United Kingdom. The two clubs are generally regarded as each other’s most fierce rivals.

The Second City derby has a rich and rocky history: it is English football’s equivalent of a clan dispute, passed on from generation to generation like the family silver.

Like most local derbies, it is one that lives most vividly just not on the pitch, or even in the stadium, but in Birmingham’s surrogate battlegrounds: its shops and offices, its school playgrounds and building sites.

Washwood Heath Road, the old boundary between Birmingham and Aston, is generally regarded as the unofficial divide. To the north: Erdington, Kingstanding, Perry Barr and Sutton Coldfield are all regarded as Villa territory. To the south, Small Heath, King’s Heath, Bordesley Green, Solihull: blue and white turf.

The first meeting between them was in 1887, which was won by Villa 1-0. There have been 127 meetings in major competition between the two teams since then, of which Aston Villa have won 57 and Birmingham City 38.

Checkout: 10 Players Who Played For Both Aston Villa And Birmingham City