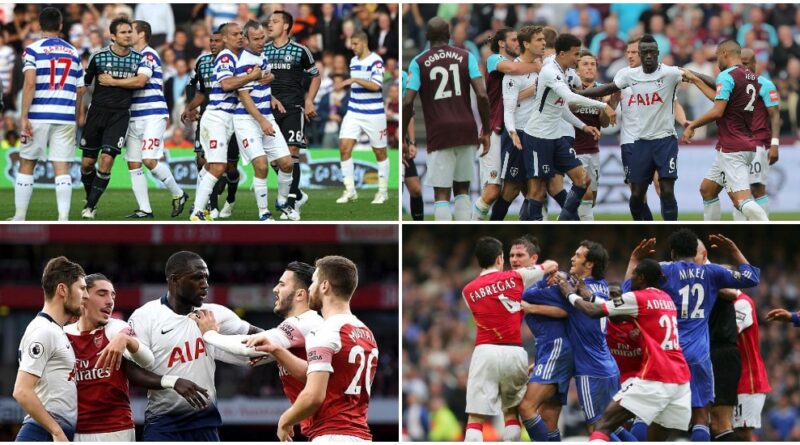 London has some of the best football clubs in England. Many of the most notorious club rivalries are between London football clubs. Many of these are based on geographical location and have a long history drawing on complex social factors.

Rivalries can also spill over into ugly scenes of violence between supporters, as was the case during the heyday of football hooliganism in the 1970s and 1980s. This regrettable tendency has not entirely disappeared, but today, many of the rivalries between clubs are thankfully settled on the pitch rather than on the grounds or on the streets outside.

Taking into consideration various factors such as the history of the rivalry, intensity of the games, passion among the crowd, attendance and other social factors, here are the Top 10 Biggest Rivalries In London Football –

The first and most obvious reason for the rivalry is the proximity of both clubs to each other as Griffin Park is a mere four and a half miles away from Loftus Road. After the Second World War, they spent practically every season in the same division for the next 20 years. At the time, the fixture was each side’s biggest game of the season and always attracted a big crowd

However, the bad feeling between the clubs runs deeper than the locality. In 1967, QPR attempted a takeover of Brentford, which would have resulted in QPR moving into Griffin Park and Brentford F.C. ceasing to exist. The story infamously broke in the London press but Brentford supporters rallied to save their club. Since then, relations between the clubs have been frosty. It is one of the biggest rivalries in London football outside the Premier League.

People talk about the Eagles’ rivalry with Brighton. But the local rivalry is simply another thing. It’s about the banter in the workplace, at school, down the pub, places where you have to spend time listening to the gloating of the derby defeats or doing a bit of gloating yourself.

Palace-Millwall is the oldest South London rivalry, dating back to 1906. The close geographical proximity of the teams contributes significantly to the rivalry, with Selhurst Park being only six miles from The Den.

A crowd of 37,774 turned out for the Fourth Division clash between Crystal Palace and Millwall at Selhurst Park on 31st March 1961 – a figure that remains the record attendance for the fourth tier of English football.

The east-west rivalry between these two London sides heated up with the Blues’ habit of poaching some of the Hammers’ best players, most notably John Terry, Joe Cole and Frank Lampard. The latter was sold to Chelsea for an £11 million transfer fee. Lampard took a while to find his feet at Stamford Bridge but turned out to be one of the best top ten Premier League signings ever – despite being a regular whipping boy for Hammers fans.

Both sets of fans share a dislike for each other, a Chelsea fan was quoted saying ” this game is right up there with Arsenal and Tottenham. A victory against West Ham, especially away, is almost always more satisfactory than beating other teams outside the top four”. All these things make this one of the biggest rivalries in London football.

During the 70s and 80s, Chelsea and Milwall boasted two of the most feared followings in London. There was rarely a game when violent clashes didn’t take place. Supporters running down the streets clashing with each other. The last time they played each other, a mass pitch invasion took place in 1995. Now because of the differences in their league tiers, they don’t meet often. And we should be thankful for that.

As local rivals, you would expect Chelsea and Queens Park Rangers to be at each other’s necks, but due to the difference in stature between the two that has not been the case for a long time. Over the last few decades, Chelsea have flourished meanwhile the Rangers have bounced up and down between leagues. However, QPR fans still consider Chelsea as their main rivals. Their fans consider it as one of the biggest rivalries in London football.

During the start of the 2011-12 season, Chelsea lost 1–0 to a newly promoted QPR in the first Premier League match between the sides since 1996. In a feisty encounter during which the Chelsea players were unable to cope with the hostile atmosphere generated by the QPR fans, players clashed on several occasions, with nine Chelsea players and two QPR booked, with Chelsea’s José Bosingwa and Didier Drogba being sent off.  What more intensified the game was that John Terry allegedly racially abused Anton Ferdinand, for which he was charged with a racially aggravated public order offence.