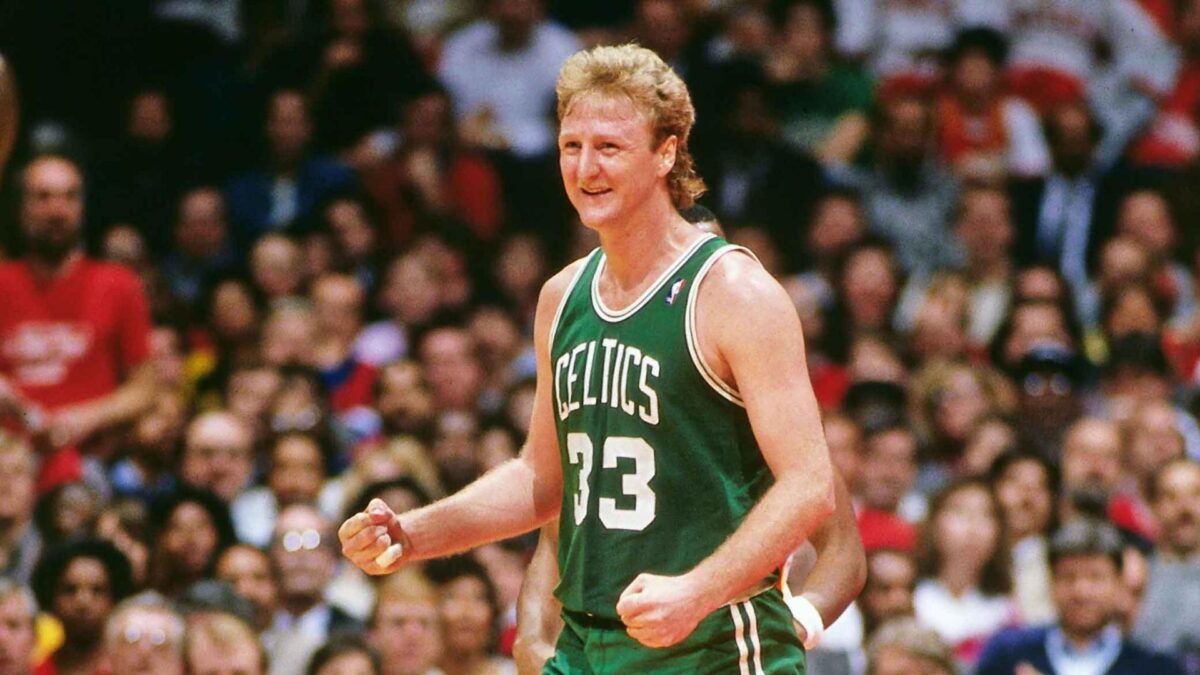 Founded in 1946, the Boston Celtics have been the NBA’s most successful franchise throughout their existence. They have won 17 NBA titles and have seen a number of great players don green jerseys over the past six decades. Here’s our list of some of the best Boston Celtics players of all time.

Considering various important factors like longevity, skills, impact on the club and performances, here are the 10 best Boston Celtics players of all time.

White, a sharp-shooting guard, played a team record 488 straight games and led the Celtics to two championships in the 70s and was the MVP of the 1976 finals. The Hall of Famer played 60 of 63 minutes in Game 5 of the of the ’76 finals, White excelled while playing with John Havlicek and Dave Cowens in the 1970s.

One of the best Boston Celtics players of all time, White starred in one of the most memorable games in NBA history, Game 5 of the 1976 NBA Finals, where he scored 33 points and dished out nine dimes in a triple-overtime victory over the Phoenix Suns. Finishing his career with the Kansas City Kings, White wound up averaging 17.2 points, four rebounds and 4.9 assists while shooting 44.4 percent from the field.

Jones was a part of some of the greatest Celtics teams ever as he won an astounding 10 NBA titles, including 8 in a row, in his 12 years with Boston. Not only was he one of the best shooting guards of his time, his reputation for hitting clutch shots was second to none.

Sam Jones was responsible for much of the scoring duty during his time in Boston and was also a consistent clutch performer in the playoffs. Thanks to his lethal mid-range jumper and ability to shoot off the glass, Jones was able to spread the floor for the Celtics and provide their bigs with more room down low. He was also capable of attacking
in transition and even crashing the glass from the perimeter.

Jones shuffled between point guard, shooting guard and small forward as needed, proving himself to be an invaluable piece in Red Auerbach’s offense. In 12 seasons as a Celtic, Jones averaged 17.7 points, 4.9 rebounds and 2.5 assists while shooting 45.6 percent overall.

“The Truth” recently had his No. 34 raised to the rafters at the Garden, and rightfully so. One of the craftiest scorers in league history, Pierce spent 15 seasons with the Celts before being traded to the Brooklyn Nets, and in that time he saw the franchise go from being a laughingstock to a championship contender. Pierce fell to Boston in the 1998 draft and instantly proved himself as a star player in this league.

Armed with a deadly jump shot and a bevy of moves off the dribble, Pierce is capable of scoring 20-plus any given night even though he lacks elite quickness. The former captain spent 15 years with the Celtics, first pulling them out of the basement with Antoine Walker and later winning a title with KG and Ray Allen.

Pierce holds the Celtics’ record for most three-point field goals made, is third in team history in games played, second in points scored, seventh in total rebounds, fifth in total assists, and first in total steals. Overall, Pierce averaged 21.8 points, six rebounds and 3.9 assists as a Celtic while shooting 44.7 percent from the floor and 37 percent from three-point range. Truly one of the best Bolton Celtics players of all time.

There is no doubt Bob Cousy is one of the best Boston Celtics players of all time. He ran the fast break to perfection and was able to hit teammates with pinpoint passes to put them in easy scoring position. Thanks to Cousy, the point guard position became just as essential to a team’s success as the center spot. Though he was a shaky shooter, Cousy was able to draw contact and get to the foul line better than most guards of his era. Even then, the poor shooting percentage is more a product of the time period than Cousy’s abilities.

He played back when teams sprinted up the court and took the first available shot, so few players besides big men shot efficiently from the field. For his career, Cousy averaged 18.4 points, 5.2 boards and 7.6 assists despite shooting just 37.5 percent from the floor.

Never a superstar player but always a consistent one, Robert Parish played an incredible 21 seasons in the NBA, 14 of which were with the Celtics, who acquired him from the Golden State Warriors in 1980. A reliable mid-range jump-shooter and a quality defensive big man, Parish was the perfect piece to slot in alongside Larry Bird and Kevin McHale, since he did not need to have plays run for him but could still find a way to impact the game.

In his career, Parish averaged 14.5 points, 9.1 boards and 1.4 assists while shooting 53.7 percent from the field. At his peak with the Celtics, he was a nightly 20-10 threat, but he never forced the issue or played outside of his strengths. Parish was as willing to score from the perimeter as he was to mix it up down low when Boston needed him to. All these earned him a place among the best Boston Celtics players of all time.

Not the most skilled player, Dave Cowens led Boston to two championships thanks to his sheer energy, heart and effort. Cowens was a player who truly left everything out on the court, and his competitive fire was the enduring characteristic of his decade in green. At 6-foot-9, many thought Cowens would be too small to play center in the NB yet he proved them all wrong when he averaged 17 points and 15 rebounds a game in his rookie year. He moved extremely well on the court, had great hands for blocking shots and coming up with steals, and could even guard out on the perimeter for stretches thanks to his thleticism.

When all else failed, he was more than happy to dole out a hard foul to prevent an easy score. Offensively, Cowens had a reliable jump shot, could throw pinpoint passes for a big man and was capable of cleaning up in the paint. For his career, he averaged 17.6 points, 13.6 rebounds and 3.8 assists on 46 percent shooting while playing all but 40 games with Boston. A Hall of Famer, Cowens was the 1972-73 NBA MVP, a two-time NBA champ, and Rookie of the Year.

A winner of three NBA titles, McHale took on the role of grit-and-hustle guy from Dave Cowens. At 6-foot-10, McHale won the Sixth Man of the Year Award twice, and he really redefined the role. A dominant interior scorer and defensive player, McHale is a Celtics’ great. His No. 32 jersey was retired by the team.

A tremendous scorer with perhaps the best post game in NBA history, Kevin McHale shined playing alongside Larry Bird and helped Boston dominate the 1980s. McHale redefined the power forward position, using his 6’10” frame and phenomenal footwork to abuse defenders on the block. McHale referred to those guarding him in the post as being in the “torture chamber,” and there really isn’t a more apt description.

With his phenomenal hands and ability to finish through contact, McHale simply could not be contained down low. He also excelled defensively, anchoring Boston in the paint and proving to be one of the game’s premier shot-blockers. He averaged a career-high 2.8 rejections in the 1985-86 season and was also an effective help defender. Beyond just his statistics, McHale was truly a team-first player who cared more about winning than anything else. He was able to thrive both in the starting five and off the bench, never letting his ego get in the way of his talent.

John Havlicek’s name may not hold the same weight nowadays as Larry Bird’s or Bill Russell’s, but
‘Hondo’, goes down in history as one of the most successful and best Boston Celtics players of all time. Havlicek spent 16 seasons in the NBA from 1962-1978, an incredible number given the poor travel conditions, rigorous schedule and lack of medical technology present during that era.

In his entire career, Havlicek missed more than seven games in a season just once and played through a separated
shoulder in the 1973 post season. A good shooter and a lockdown defender, Hondo was capable of handling the ball and playing off the ball on the wing too. He was also a phenomenal athlete who thrived on the fast break and was willing to throw his body around with reckless abandon.

His career accomplishments include eight NBA titles, one NBA Finals MVP, 13-time NBA All-Star, four-time All-NBA first team, No. 17 retired by Celtics. Havlicek averaged 20.8 points, 6.3 rebounds and 4.8 assists while shooting 43.9 percent from the field. He also gave us one of the NBA’s enduring phrases in the 1965 Eastern Conference Finals, making “Havlicek stole the ball!” one of the league’s immortal phrases.

Things were looking bleak for Boston in the late 1970s before the arrival of Larry Bird, who instantly returned the franchise to its status as a perennial contender. Bird was far from the best athlete, but he saw the floor like few players in NBA history have, and what he lacked in pure athleticism he made up for in sheer creativity. Bird was a true five-tool player, someone capable of scoring at will, rebounding his position, playing point forward and even locking down his man in his younger days.

He won three NBA championships and three MVP Awards. Bird is also widely regarded as one of the 10-15 best players to ever play the game. He averaged 24.3 PPG, 10 RPG, and 6.3 APG for his career, and he shot nearly 50 percent from the field–an incredible accomplishment for a shooter from distance. In his prime, Bird was as tough to cover offensively as any player in league history. He had limitless range, could back down smaller defenders and was such a deft passer that often his teammate would have the ball before the defense even realized it left Bird’s hands.

Back injuries slowed him down during the later years of his career, but Bird was still able to bring Boston three more banners while his rivalry with Magic Johnson defined the NBA for a new generation of basketball fans.

One of the greatest winners in all of professional sports, Bill Russell came to the Celtics in 1956 and immediately made as big an impact on the game of basketball as any player has. With his phenomenal athleticism, Russell helped to transform basketball from a horizontal game into a vertical one. No player in the history of the game has won more titles than Russell, who collected an amazing 11 rings in 13 seasons with the Celtics.

A five-time NBA MVP, Russell did it all during his incredible career and is easily one of the greatest players to ever play the game. What ultimately sets Russell apart from Larry Bird as the greatest Celtic ever is that though Bird made basketball a much more popular game, Russell truly transformed the way the sport is played.

Though his 6’9” stature would seem unimpressive now, Russell towered over players in his era and used his superb length and instincts to dominate on the defensive end of the floor. Never much of a scorer, Russell made his bones as a rebounder, a shot-blocker and an underrated passer. He was a decent post-up threat, but he made up for his lack of a jumper with his ability to run the floor and get easy buckets.

For his career he averaged 15.1 points, 22.5 rebounds and 4.3 assists, with the great tragedy being that blocks were not kept track of back then. Beyond just his numbers, Russell was as fearsome a competitor as they come. He had an 11-0 record in Game 7s, and the only years he did not win a championship were 1958 and 1967. He frequently played his best ball under the brightest lights, posting a 30-point, 40-rebound performance in Game 7 of the 1962 NBA Finals. To put it simply, there is a reason that the NBA Finals MVP trophy is named after Russell.