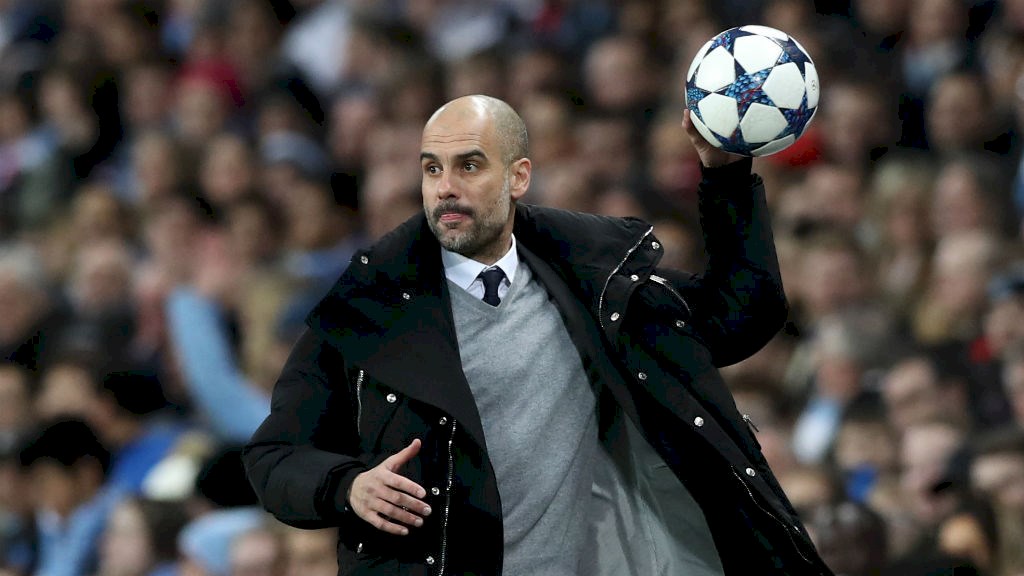 You could hear that throughout the Etihad at the first season under Pep Guardiola. City fans expected that, Pep Guardiola,one of the finest managers of the game, would take Manchester City to new height. Expectations were high on Pep to deliver but after enduring the first trophyless season in his managerial career, even Pep has admitted that he would have been sacked if he was in Barcelona or Bayern Munich. But City wouldn’t sack Pep so easily, they have a long-term project ahead with Pep being the orchestrator. Although the suitability of Pep’s tactics in English Premier League came under scanner many times, no one can argue with the fact that he wasn’t duely supported by his players’ form either. One of the main problems for City this season was their defence.
The right-back position gave Pep much of a headache this season. While both Pablo Zabaleta and Bacary Sagna contributed decently going forward, they failed miserably during tracking back which lead to City conceding many goals. Guardiola even decided to deploy Jesus Navas and Fernandinho in the right-back position at the end of the season. Zabaleta, Sagna and Navas all of them will be out of contract after this season. Zabaleta has already announced that he will leave the club after this season. Sagna is also unlikely to get any new contract. Although Navas has been reportedly offered a new one-year deal to remain as second choice right-back, he prefers a move to his boyhood club Sevilla. That means, Pep is gonna dip into transfer market to sign at least one new right-back, if not two.
Here we look at the right-backs linked with City and their probability of ending up at the Etihad next season.

Tottenham right-back Kyle Walker is right on top of Guardiola’s shopping list. Walker is regarded as one of the best right-backs in English Premier League. A full England international, Walker has physicality to deal with strikers and the pace to track back if he loses the man. He frequently bursts forward to help his team in attacking half. He is good in the air and has quality passing skill.For an attacking side like City, Walker seems to be the perfect fit.

Walker has been heavily linked with City after been frozen out under Mauricio Pochettino. Pochettino has used Kieran Trippier over Walker in couple of important matches and that paved the way for Walker to leave Spurs. A famous City ITK ‘MCRJON’ has already termed Walker to City a done deal. Sky Bet have also suspended betting on Walker joining Manchester City after odds reduced to 1/10 from 1/3. The indications are already there and it’s looking like the deal will go through.

Portuguese right-back Nelson Semedo is a hot prospect in the transfer market. This season he has produced some eye-catching performances for Benfica both in Primeira Liga and Champions League. He has grabbed 10+ assists this season which is something to brag about for a defender.

Semedo is an attacking right-back who mix his pace with technical skills superbly. Not only at attack, he is equally adapted at defence too. He has great passing sense and can get the ball out of defensive third in difficult situations easily. Such as his reputation that he is often dubbed as “young Dani Alves”. Maybe the only thing Semedo lacks is physicality. Otherwise, he is a perfect fit for Pep’s system – attack minded, pacy, has decent passing sense, a ball-playing defender and defensively solid.

Semedo has a contract with Benfica until 2021 including a £35m release clause. Moreover Barcelona, AC Milan, Juventus, Manchester United, Bayern Munich, Inter Milan and a host of other European giants are also reportedly interested in the 23-year-old Portuguese international. So, if City does wish to go for him, they would have a huge battle in their hand.

One of the most coveted right-backs in the world right now is Hector Bellerin. He is fast, agile and aggressive. The Spanish international is highly regarded for his contributions in attacking-third. He also has the necessary physicality to deal with Premier League’s strikers as well as has high passing accuracy something Guardiola admires a lot. The only drawback in his game is his lack of defensive solidity. He always tries to redeem his mistakes through his pace but has been exposed a lot of times.

Guardiola is a known admirer of the former La Masia product. Bellerin has been heavily linked with City from day one of Guardiola’s arrival at the club. Barcelona are also very much interested in Bellerin. A stay at the Emirates is also very much on the cards for the Spaniard.

Bellerin himself is reportedly keen on working under Pep but he is well-aware that moving directly to a rival club might not go down well with the Gunners fans.

If someone wants to look at how a Pep type player models his game, they should follow Joshua Kimmich closely. Kimmich, 22, made his debut at Bayern Munich in Guardiola’s last season at the Allianz Arena appearing in 36 matches. Primarily a right-back, he was used in a number of positions by Pep, excelling in all of them. The young German international is fast, agile, young, versatile and attack-minded.
Moreover, he is adept on the ball and a quality passing maestro something which are very much important aspects of Guardiola’s style of play.

No doubt, Guardiola at City would try to bring one of his favourite youngsters from Munich whenever he becomes available. Reports surrounding Kimmich’s future suddenly started to circulate when he was benched in a number of matches by Bayern boss Carlo Ancelotti as he preferred Lahm over Kimmich. Kimmich reportedly became frustrated over his treatment and as Bayern had been continuously linked with a number of high-profile right-backs to replace Lahm, Kimmich reportedly decided to leave the Allianz Arena next season.

But recently, Kimmich has confirmed that he wants to remain at Bayern Munich. Manager Carlo Ancelotti has also referred Kimmich as the “natural successor of Lahm”. That settles the debate and it’s highly unlikely that we would see Kimmich leaving Bayern Munich anytime soon.

The Valencia right-back is another player linked with City in recent months. He is defensively solid, has frightening pace and is excellent going forward. His work-rate and energy seem to be never-ending. He is also renowned for providing some deadly crosses and long balls into the attacking half. Moreover, he is a versatile player being equally effective playing in both right-back and right-wing positions. Cancelo’s dribbling is another eye-catching credential of him.

Pep has enough reasons to try to sign the 22-year-old Portuguese international. Valencia are going through a turbulent phase as their financial condition is very poor. So, they would be forced to let Cancelo go if the right offer comes. Barcelona and Chelsea are also reportedly tracking Cancelo. That means, City need to work quickly to wrap up any potential deal. But, Cancelo might not be the first-choice for City in transfer market. The Sky Blues would only pursue him if they fail to land other top targets.

The 25-year-old Portuguese International Soares is a much cheaper option for Pep Guardiola.

Manchester City have been vulnerable at the back this season and their defense has been exposed again and again against quality opponents. Soares has 3 assists to his name in 30 Premier League appearances for the Saints this season. Although he isn’t an attractive attacking full-back option as Guardiola loves his full-backs to be, but he is defensively sound. His long balls are deadly. Soares will also directly fit into Pep’s setup as he is well aware of the Premier League’s playing style.

Soares will come at a lower price than the other potential targets. But Soares might be an alternative choice for Pep if he fails to land other top targets.

Benjamin Henrichs, the young German, is another right-back linked with Manchester City. Guardiola is known to be a long time admirer of the 19-year-old. Back in January Sky Germany also reported that City officials have held a secret meeting with Henrich’s agent but nothing was finalised back then.

Primarily a right-back, Henrichs can play in seven different positions. He played as a right-back, left-back, right-winger, left winger, central midfielder, defensive midfielder and attacking midfielder before finally settled for right-back position. He is equally comfortable at playing in all these positions. It’s a no-brainer why Guardiola rates Henrichs so highly.

Henrichs is a reliable figure at the heart of both attack and defence. He has genuine pace and dribbling skills. Having played many matches in midfield too, he is adept on the ball, has quality passing skill and recovers very quickly.

But recently, Henrichs has signed a new contract-extension at Bayer Leverkusen. That means Manchester City need to offer a sufficiently large amount of money to convince Leverkusen to sell their prized-asset. With Henrichs, himself seems to be happy at Leverkusen, Guardiola looks likely to miss out on the German international.

Fabinho has been heavily linked with Manchester City in recent times. He has been sensational for Monaco this season helping them to win the Ligue 1 and to reach semi-finals of the Champions League.

Although he has been used as a central midfielder this season, Fabinho is primarily a right-back known for his defensive solidity who frequently strides forward to help his team scoring. His versatility has attracted Guardiola. City have sent scouts many times this season to take a close look at Fabinho. Guardiola himself had the chance to analyse the Brazilian international when City met Monaco in the round-of-16 of the Champions League.

Earlier this season, Fabinho’s father revealed that Fabinho would love to go to any of the Manchester clubs but he preferred working under Guardiola. Recently renowned Spanish journalist Gerard Romero has claimed that City are closing in on Fabinho. If Manchester City can pull off a deal for Fabinho, it would be a major boost for Guardiola’s men on their pursuit of Premier League and Champions League next season.

Get ready for an exciting summer transfer window!